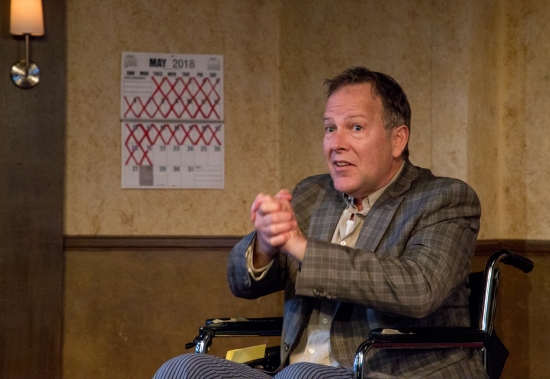 If you are looking for “balanced” criticism, look somewhere else. Somebody done made me mad as hell, and I’m not going to take it anymore.

Get that reference? Was that OK with you, that I included a reference to something theatrical or cinematic in a piece about a theater piece about the theatre of life? Yeah. Was that self-serving of me? Some reviewers might say so.

I once read somewhere that Death is the ultimate weakness, and we dare not insult it. Apparently that is another hallmark of civility now obliterated. From the White House on down to Indyweek, there are people who think it is OK to dismiss the dying’s final brave acts.

Manbites Dog Theater has lived a brave, bold life in 31 seasons of artmaking on a shoestring. With the kindest of hearts and dauntingly high aesthetic demands, MDT has made the most out the least in play after play, with “inclusiveness” the joists and beams of the house they built for our whole community–not a brag line on the facade. Now Manbites is presenting its final show, and guess what? It’s about Death. It’s about Life. It’s about Theatre.

Wakey, Wakey shoots you in the heart with Time’s Arrow, but it is not “maudlin,” as it was described in Indyweek, whose reviewer was present at the same show I saw. I freely admit to sobbing and sniffling from the opening scene and on throughout the 75 minutes–from grief, from delight–but not from distaste at anything maudlin or saccaharine.

Will Eno’s script, quirky, self-aware, ironic and gentle, along with Jeff Storer’s exceptionally tight direction that creates action in a very talky play, and the unmasked characterizations by Derrick Ivey and Lakeisha Coffey, kept “maudlin” out of the room. Dreary is there; quotidian is there; resignation is there–and acceptance, wry and otherwise. The play is also very funny. 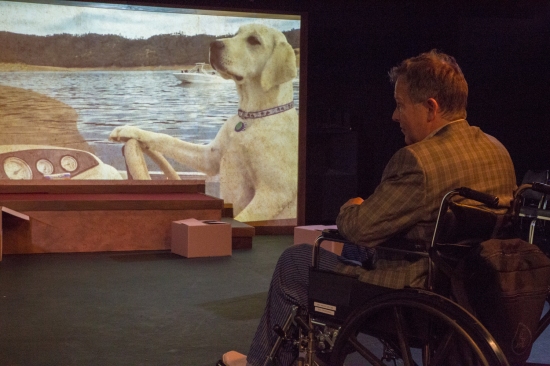 All those states of being are given a place to pulse in Sonya Leigh Drum’s shabby care facility common room set, which is strewn with moving boxes and anchored with a calendar, days Xed-off, and a working clock ticking down the time under Andrew Parks’ purposefully dull and dappled lighting (why oh why are the lights in care facilities so dim?). To remind us that this is Theatre, the mobility ramp is covered in red carpet, and the steps are bedizened with purple paint. Alex Maness’ excellent three-screen video projections and his sound design consistently keep us interpreting the play on both its levels: the story of the particular man, and the story of Everyman/Every Theater. By so carefully calibrating and balancing the micro-details and the meta-philosophizing, the enclosed action and the breaking of the fourth wall, this team has made something both excruciatingly intimate and as consoling and large as the thinking mind.

Our dying protagonist, Guy, gives actor Derrick Ivey one last turn on the stage he has graced so often, and as always, he gives it his all. Protean is the word for this man. Each character he plays completely supplants the ones you saw before, yet somehow he contains them all, and all the wisdom that has accrued to him from their portrayals, he conveys to the next character. If life should be so cruel as to deny us any future performances by Ivey, we can take his Guy with us to our own graves. It’s just how it is, his character shows us: it is hard to get up that ramp; it is easy to go too fast on the downslope; it is all baffling and confused and just bearably sweet and time’s up before you are through.

Lakeisha Coffey as Lisa, the hospice companion, does not have long on stage, but she gives an exquisite performance of disinterested kindness and glowing life. Coffey is capable of tremendous intensity, but here she shows gracious depths and sparkling light. She is gorgeously dressed (costume design by Derrick Ivey) and near the play’s end, she dances delightfully (choreography by Tristan Parks). To dance is to live; to live is to dance through time to the final curtain. To live in the Theatre, though, is to create a kind of immortality, for times and for people, for plays and ideas and beliefs and characters who will dance for us again anytime we care to pull open the curtains in our minds and let them twirl in the spangled light of memory.

Wakey, Wakey continues through June 10. See manbitesdogtheater.org for dates, times and ticket purchases. Manbites Dog artistic and managing directors Jeff Storer and Ed Hunt will take a break before returning to greet us again. They will lead the non-profit organization into a new life of supporting other local theaters through the fund generated by the sale of the the Manbites Dog Theater building.

The Martha Graham Dance Company, like the companies of several other of the great modern dance choreographers, is still struggling to find the right mix of classic works by the late artist and new works by others that will allow the company to continue to live and thrive. The program at Carolina Performing Arts last night–which repeats Friday, March 24–illustrates the dichotomy, and some of the choice-making.

The evening opens with Act 2 of Graham’s powerful Clytemnestra, with its Noguchi set and Egyptian music. Yep, Act 2. The piece really doesn’t work so well without Act 1. I don’t know if the lackluster performance was due to the cast having to plunge in, dramatically speaking, without any lead-up, or for some other reason. The dancing, while correct, lacked passion–it never caught fire. Not even PeiJu Chien-Pott, as Clytemnestra, worked up any feeling as her children prepared to take their bloody revenge upon her.

The program switches gears with Sidi Larbi Cherkaoui’s new work, Mosaic, a co-commission by Carolina Performing Arts. Where Clytemnestra is highly stylized, and makes much use of angular profiles, Mosaic is very fluid, its individual images submerged in the kinetic flow. It was very interesting to see something made of little pieces that was all about the joining together rather than the separate bits. The delicious partnering and fabulous limber agility in the shape-making were inseparable from the swirling stage patterns. It was very lovely, and in retrospect deeply satisfying in the way its form was its content. 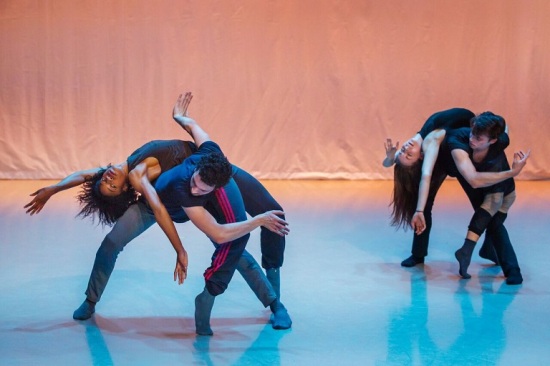 After intermission comes comes Annie-B Parson’s I used to love you, described as a re-imagining of Martha Graham’s comedic 1941 dance, Punch and The Judy, itself derived from the Punch and Judy shows with puppets or marionettes. Parson’s work, more theatrical than dancey, includes everything but the kitchen sink: ergonomic rolling chairs, projections large and small, music, noise, text, radical reimagining–or “updating”–of various subtexts, fabulous bright costumes, and–oh, you guessed it–dancers with microphones. Dancers with microphones who were not experts at using them. Some of Will Eno’s text came through; some of it was irretrievably lost to microphone noise and feedback. Will Eno’s text! It was hard not to be pissed off about this. In fact, I failed. However, the piece is quite entertaining in its way, although it undercut its own cleverness with numerous odd lags in timing, which diminished its funniness. Another issue with the piece came to light while discussing it with a student next to me: he had never heard of Punch and Judy. Part of the interest of this work lies in its layered cultural references, yet younger viewers may not be able to see below the hyper-active surface.

The evening closes with Martha Graham’s last dance, the effervescent, angst-free Maple Leaf Rag from 1990, set to Scott Joplin’s lively Elite Syncopations, Bethena and the Maple Leaf Rag (arranged by Chris Landriau). There is nothing here that is not lovable–Graham even sends up herself, charmingly–and Graham aficionados will recognize many of her striking forms and movement phrases from the course of her career–there are quite a few similarities with the more buoyant sections of her Appalachian Spring, for instance. Some may find Maple Leaf Rag lacking in substance, but you know, joy is an ethereal thing.

Manbites Dog Theater has staged works by Will Eno in the past, including the messily brilliant Oh, the Humanity (and other exclamations) in 2010, Middletown, and Thom Pain (based on nothing), all directed by Jeff Storer. Now Storer has staged Eno’s 2014 The Open House, directing a cast well known to him and to each other, in a play that puts some of Eno’s ideas about people and mortality into firmer form that his previous works.

In The Open House, an emotionally messed up white middle-class family is trying to have a nice day together. Or, some of them are trying; the other one is a chronic tyrant in a wheelchair. Father is a mean old bastard, casually but self-consciously cruel to his wife, son and daughter, and his brother, who lives with the family. It’s Father and Mother’s anniversary, and the grown children have come home, and nobody has any thing to say, or if they do, they don’t know how to say it, or they can’t say it, because they’ve lived a lifetime with Father’s verbal battering.

They are caught in amber. You can almost see it rising up around them, almost see it sucking at the bottoms of the son’s and daughter’s shoes as they escape to errands. Derrick Ivey’s design and Chuck Catotti’s lighting emphasize the dingy colorless stuckness of the family’s life, and the closed nature of their feedback loop. 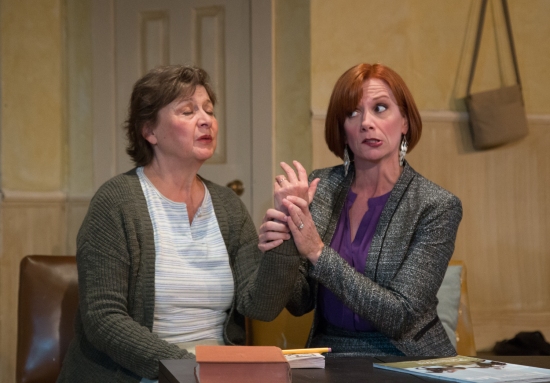 Hand to hand resuscitation in THE OPEN HOUSE. Marcia Edmundson, left, with J Evarts, finally has someone pay attention to her bad wrist. Photo: Alan Dehmer.

But change is coming: the wheels of life will turn; transformations will occur. (It is, after all, a play–Eno is not so relentless in reminding us of that in this script, but he keeps it stagey.) It would spoil matters to tell you about them.

I found The Open House very sad, although it has plenty of laugh lines and ridiculous moments. All these people in the same room, each alone and longing and incapable of taking action, it’s rather Beckettian.

Father, cold and controlling of those around him, literally cannot–a stroke (ah, Malign Fate) has crippled him. Michael Foley gives one of his finest performances ever. With Father nearly immobile in his wheelchair, Foley must do it all with voice, facial expression, timing and small gestures, usually with the newspaper he uses as a shield and a prod. He crackles with animosity, which makes his slide into confusion even more painful to watch.

Michael Brocki as Uncle also does very fine work here, especially later in the 85-minute one-act. Marcia Edmundson, as always, is a joy to watch. Although she uses many of the same behaviors for each role, I can never spy the actor behind the character on stage. The Son doesn’t provide as much scope for Matthew Hager–he’s good here, but it would be nice to see him in a bigger role. J Evarts makes every role a big one, and she’s a dervish in this one.

Manbites Dog is not a repertory company, but it might as well be. It’s a theatrical home to some wonderful actors and directors and designers, many of whom have worked together for three decades now to mine the human psyche and put its intricacy and simplicity before us through the words of playwrights they’ve pondered together. If there is ever to be a great pax humanitas, it may rise up from a theatre such as this, where the hard work of the humanities goes on late into the night, year after year.