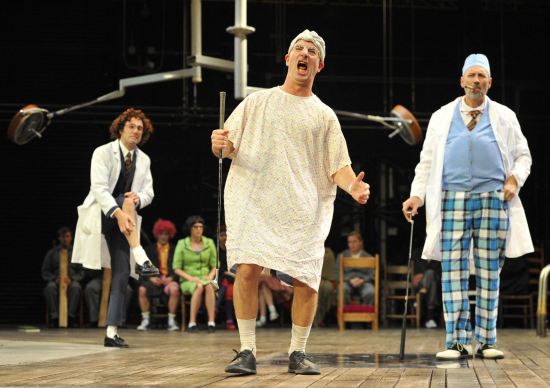 Illness can be very nasty; medicine equally so. PlayMakers’ new adaptation of IMAGINARY INVALID revels in it–but as I say in today’s CVNC review, 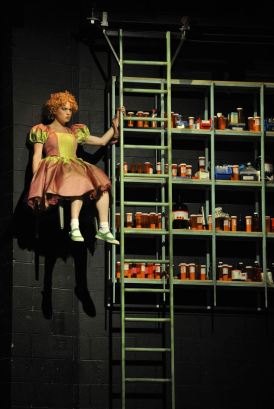 “Imaginary Invalid was an excellent choice for examination by PlayMakers, which should be commended for commissioning a version for today, and bringing in director Dominique Serrand and actors who work quite differently from PlayMakers’ usual style. The theatrics in  Imaginary Invalid are far more physical, and far less polite, than I’ve ever seen on the PRC main stage. The raucous circus is sometimes highly effective; at others, the absurdities detract from the story. At times the language descends from refreshingly abrasive to crude and the number of scatological jokes seems unnecessarily high. (On opening night — the world premiere — quite a few patrons evaporated at intermission.) There was rather too much Woody Allen-like shtick for my personal taste, but when it is right it is so right. A scene in which St. Peter (a very funny Jeffrey Blair Cornell) stands on a chair to talk to God on a cell phone, and tells Him that He needs to “smite Verizon,” drew howls of laughter.”

“Even though this play is often very funny, and sometimes masquerades as froth, it is no light entertainment. It’s an intellectual pan forte: dense, rich with ideas, and hard to chew. I’m not sure I got all the flavors — I may have to have another piece and see it again.”