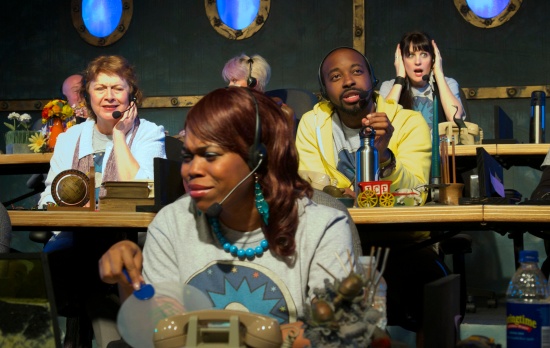 The play’s the thing in Mickle Maher’s smart, kind, complex investigation of The Tempest and theatre-making, which has just opened at Manbites Dog Theater, where it is marvelously directed by Jeff Storer.  Spirits To Enforce has levels beyond levels, but our super-heroes of the stage surmount all obstacles and overcome the dastardly evil-doers with the power their arts. It’s fine and funny and I suggest you see it while you may (through May 10). My proper review will run in next week’s Indy, but in the meantime, here are a few photos to consider. I’ll just add that this show offers the unusual opportunity to witness a second female interpretation this season of Prospero (following Julie Fishell’s intriguing version at PlayMakers). Marcia Edmundson doesn’t get to give all the lines, as she’s busy being a super-hero and a fundraiser, but she speaks enough of them to make one long to see her fully in the role. Spirits to Enforce is tantalizing that way, with all the characters. 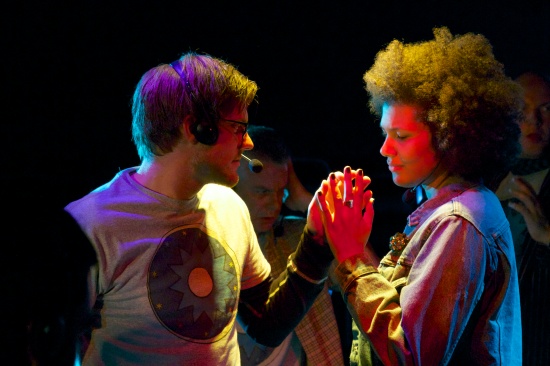 Jon Haas as The Tune/Ferdinand and Jessica Flemming as Memory Lass/Miranda in the current Manbites Dog production of SPIRITS TO ENFORCE. Photo: Alan Dehmer. 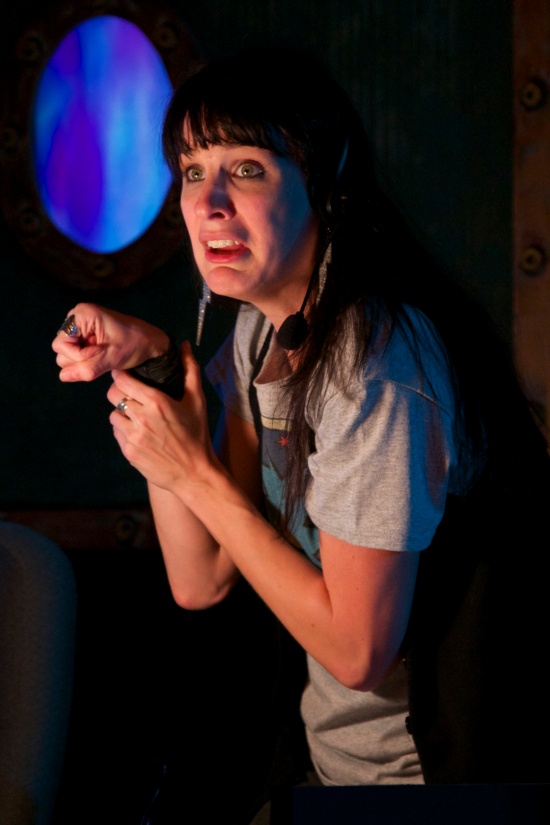 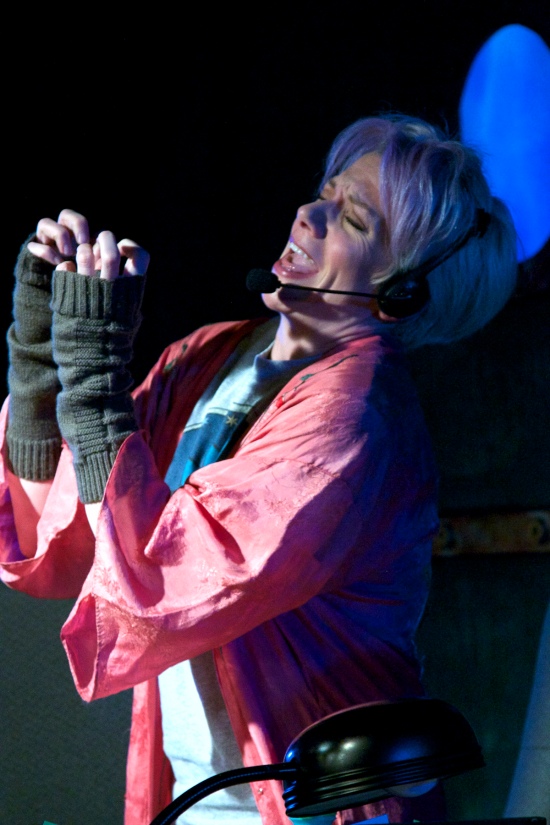 Stories of metamorphosis abound in every culture; our changing bodies and changing desires have caused them to arise in the human mind since the beginning. Anyone raised in Western literary culture will have been exposed since childhood to the stories of strange and wondrous changes collected by the Roman poet Ovid (43 BC-18 AD) from all the Greek and Roman sources available to him and collated into 15 books of poetically flowing story, Metamorphoses. The stories explain things, like the existence of spiders; or lay out the consequences of behaviors like greed, incest, hubris or self-absorption; they offer consolations against the griefs of life. Ovid has been a source for writers as diverse as Shakespeare and the forgotten scribes of children’s early readers. 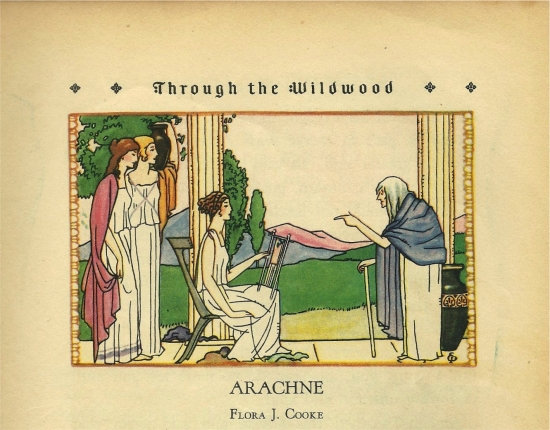 Arachne could weave even more beautifully than Athena, shown here disguised as a crone, preparing to turn Arachne into the first spider for that insolence. From the 1928 children’s compendium, Book Trails. The story appears in Book VI of Ovid’s Metamorphoses.

More recently, the playwright, director and MacArthur Fellowship winner Mary Zimmerman raided Ovid’s trove for her 1998 play, Metamorphoses. She chose just a few of his stories to enliven onstage, and augmented them with related material from other sources (poetry by Rainer Maria Rilke; the story of Eros and Psyche, which does not come down via Ovid), creating a theatrical experience that mimics the carefully crafted flow of Ovid’s work, in which each story has some connection to those on either side of it.

In Zimmerman’s work, water, that great signifier of formal fluidity and agent of change, is a central element, and water there is—a great pool taking up much of the stage–at UNC’s Paul Green Theatre, where PlayMakers Repertory Company has mounted Metamorphoses. Co-directed by PlayMakers’ Joseph Haj and visiting master artist Dominique Serrand, Metamorphoses is playing in rotating rep with The Tempest through Dec. 8. 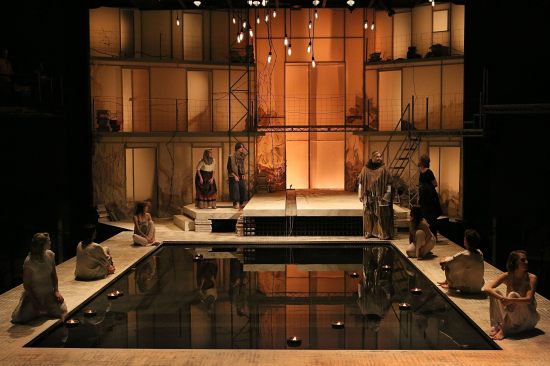 The ensemble in PRC’s METAMORPHOSES. Photo: Michal Daniel for PRC.

PRC has production capabilities far outstripping all other theaters in the area, capabilities created and supported by the company’s role in the teaching programs of the Department of Dramatic Art. Every production at PlayMakers is a learning experience for both acting and theatre-tech students, and they supply a huge labor force while learning. For a show involving water on stage, with actors continually getting in and out of it, backstage work increases exponentially; for two alternating shows in which actors and their clothes must be dried before their next entrance, a backstage cast of thousands and many flow charts (pardon the expression) are required. 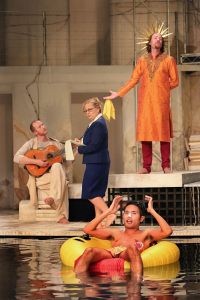 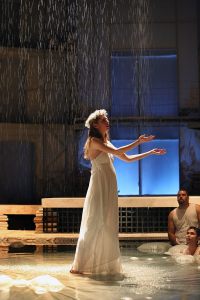 Carey Cox as Eurydice in the rain, with Nilan Johnson and Nathaniel P. Claridad, in METAMORPHOSES. Photo: Michal Daniel for PRC.

But one does not think about that while the stories unfurl and float away through the dark sea of mythic consciousness. One may think about time, or timelessness, or how much we are the same as the men and women who lived thousands of years ago and generated these mythic tales. One may be pierced or pinched by them to tears, so vivid are the stories and so exact their parallels to personal experiences. Just in case someone might have missed their relevance to contemporary issues, Zimmerman inserted a note-taking, jargon-speaking psychologist (well-played by Julia Gibson) into the story of Phaeton (Nathaniel P. Claridad) crashing and burning after taking his father (Gregory DeCandia) Apollo’s sun chariot for a disastrous spin. The script makes this a funny story, but most of them are not–though several do have happy conclusions. There’s not anything you can do to alleviate the pain of Orpheus, who just can’t not look back. But there is a kind of joy in the metamorphosis into seabirds of the grieving widow and her drowned husband, and celebration when Midas after much travail loses his golden touch and regains his live daughter. The great stories to live by are saved for the end, and by the end on opening night, the cast, most of whom are first and second year MFA students, had lost their initial stiffness and gotten into the rhythm (many of these actors also play in The Tempest which opened the night before, so some transitional moments can be forgiven). Both the story of Philemon and Baucis, an old, poor, couple who give hospitality to strangers, and thereby entertain the gods unaware; and the story of Eros and Psyche divided and reunited, are beautifully played. It’s wonderful to see these ancient myths brought to new life in young bodies, and to be reminded of  how, always changing, we never change. 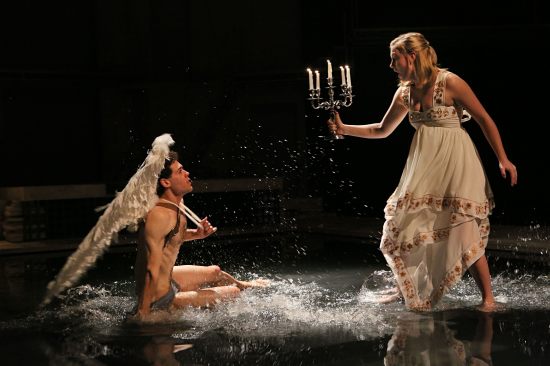 Brandon Garegnani and Arielle Yoder as Eros and Psyche in the PRC production of METAMORPHOSES. Photo: Michal Daniel for PRC.

As satisfying as Metamorphoses is, the companion production of The Tempest is even more fulfilling. My review was published Nov. 8, 2013, on Classical Voice of North Carolina, with the title “A Lucid Storm: The Tempest at PlayMakers.” 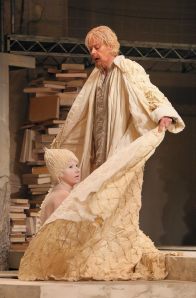 Julie Fishell as Prospero and Maren Searle as Ariel in THE TEMPEST. Photo: Michal Daniel for PRC.

Shakespeare’s The Tempest is one of his most delightful plays, and not only for its many pleasant aspects. A story’s told from start to finish, and in it wrongs are righted, men better themselves, and a love match is made. Spirits and monsters can be seen and heard. There are ridiculous pratfalls and tender revelations. There’s music, and language that could be called the same. But no matter what interpretation du jour is laid upon the script, the play’s meditation on the magical power of words and stories to create and shape life is what makes it so engaging each time one sees it, and so worthy of seeing again and again. 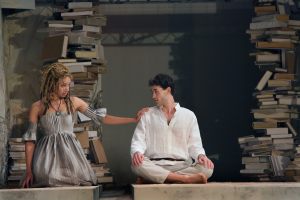 PlayMakers Repertory Company has just opened a refined and visually-lovely new….READ THE REST ON CVNC HERE. 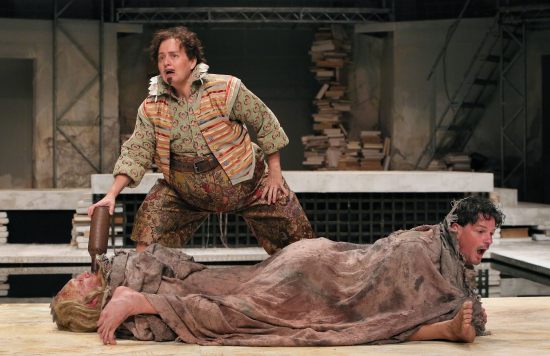