PlayMakers Repertory Company could not have made a more apt choice for this #nastywoman voting season than Arthur Miller’s great play, The Crucible. Miller wrote it during the superheated “Red scare” days of the early 1950s, when the demagogue run amok was Joseph McCarthy, holding his “witch trials” in the House Un-American Activities Committee, but Miller cannily placed his story of fear and honor, manipulation and control, in the Salem, Massachusetts of 1692, demonstrating that mass hysteria and the totalitarian requirement to conform have been part of American life since its earliest years. Miller makes distinct parallels between the HUAC hearings, which ruined many lives, and the deadly witch trials of rigidly Puritan Salem, during which neighbor turned on neighbor, and dozens, mostly women, were sentenced to hang. False witness was taken as the truth. Yes, “Hang the bitch!” echoes all the way back to the 17th century: this play speaks as well to this moment in America as it did to the America of 1953, when it was first produced.

The Ensemble a few minutes later in PlayMakers Repertory Company’s production of The Crucible by Arthur Miller. Lies breed chaos: Chaos is the enemy of Justice, although the Law made feed on it.  Photo: Jon Gardiner.

Miller also, brilliantly, changed focus repeatedly throughout the play, moving back and forth from the larger social picture to the intimacy of a marriage, and examining the damage done in both by rigid social expectations, lies and betrayals–and, with an even sharper pen, probing the actualities of honor, loyalty and freedom. With each new angle, and each turn of the screw, The Crucible becomes more soul-chilling. 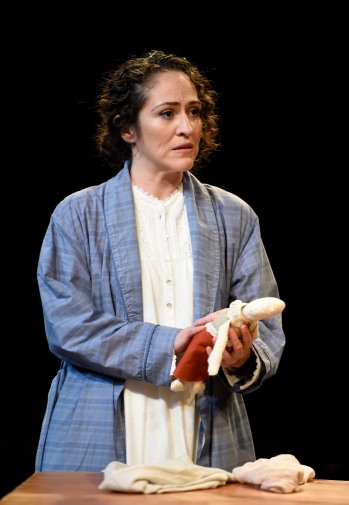 Guest director Desdemona Chiang has this complex four-act with its huge cast well in hand, and keeps it moving at a pace that ensures an ever-heightening sense of danger. To emphasize the heated crucible (or cauldron?) in which the story swirls, she has placed the audience on all four sides of the stage, rather than using the U-shaped thrust configuration of the Paul Green Theater. Visually and emotionally this works very well; however, that change changed the acoustics of the room, and made mush out of some of the dialogue, especially in the first two acts. After intermission, at the beginning of the third act, the wooden ceiling which has been hovering oppressively over the stage is lowered, slowly, with much creaking and clanking to become the floor of the courtroom. I found this a little self-consciously theatrical, and its symbology a little too broad-brush, but the sound quality in the room was much better after the ceiling came down. 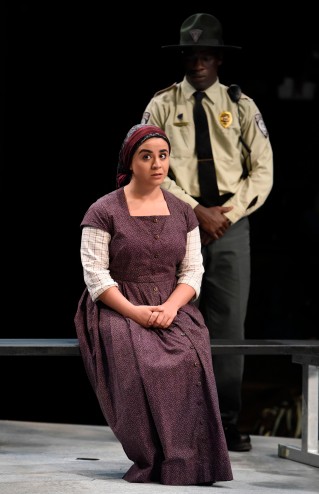 CHRISTINE MIRZAYAN as Mary Warren and ALEX GIVENS as Marshal Herrick in PRC’s production of The Crucible. Photo: Jon Gardiner.

If you had to reduce the message of this play to one phrase, it would be to “choose death before dishonor.” But Miller, Chiang and the cast all have sympathy for the hard truth that our very cells cry out to live, and few souls can remain pure when their bodies fear for their lives. Kathryn Hunter-Williams of PRC gives an extraordinary performance as Rebecca Nurse, the only one of the community who doesn’t even consider condemning her immortal soul by a false “confession” that would save her mortal body from the gallows. First year MFA student Christine Mirzayan does a fine job with the young woman Mary Warren, whose moral core is undeveloped, and who keeps changing her testimony in a desperate attempt to save herself and her friends, fueling the very evil she seeks to evade.

It is a great pleasure to see so many of PRC’s members on stage together, all doing excellent work. Along with Kathryn Hunter-Williams, Ray Dooley, as the pugnacious Giles Corey; David Adamson as the bewildered Francis Nurse; Julia Gibson in two roles; and Jeffrey Blair Cornell as Deputy Governor Danforth, all render powerful, vivid characterizations. This is one of Cornell’s best performances. They are joined by students ranging from undergraduates to third year MFA candidates in the Professional Actor Training Program, of whom Allison Altman, as the vengeful, trouble-causing Abigail Williams, and Schuyler Scott Mastain, as the ineffectual Rev. John Hale, stand out.

ARIEL SHAFIR as John Proctor and SARITA OCÓN as Elizabeth Proctor in PRC’s production of The Crucible by Arthur Miller. Photo: Jon Gardiner.

But guest artists Ariel Shafir and Sarita Ocón as John and Elizabeth Proctor put the fire under this crucible. John broke the Commandment on adultery and his marriage vows, betraying his wife (sick for so long after the last baby) with the beautiful, self-serving Abigail, but although he recognizes the error of his ways, neither woman can quite believe him. Abigail thinks a roll in the hay was a promise to her; Elizabeth inspects his every utterance for traces of new lies. But when the forces of the state and church together attempt to turn John and Elizabeth on each other, they will not be turned, except back toward each other, for precious moments. John almost chooses life with Elizabeth, but cannot bring himself to break the Commandment against bearing false witness, which would dishonor the name his sons carry forward. Elizabeth cannot dishonor his honorableness or her own as a “covenanted Christian woman” with a lie that could save them. Shafir and Ocón make all this pain and struggle piercingly believable. This is very fine acting, subtle, well-vocalized, and free of histrionics, and their intimate battle and detente, as the Proctors, bring the meaning of the larger story into terrifying focus. The Proctors’ sacrifice of their lives, as Miller makes clear, is not only for their own honor, but for the life and honor of their community and country.

The Crucible continues at PlayMakers Repertory Company through Nov. 6. Tickets at playmakersrep.org or 919-962-7529. 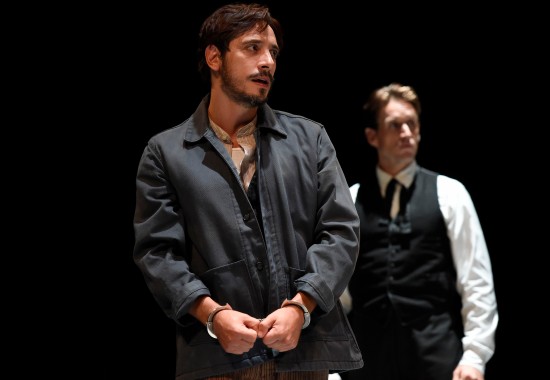