Pinter’s script was set in post-WWII England, and has been modified here with American place names and given a 1970s milieu. It takes place in a dim, grubby apartment so full of broken stuff and miscellaneous parts that the characters must shift things around constantly to move through the space. This heaving and tossing contributes greatly to the sensation of imbalance created by the changing relationships among the characters as their perceptions of each other change or clarify. The three acts are merged here into one, a long pitiless see-sawing which ultimately reaches stasis. O’Berski’s acute direction and timing do justice to Pinter’s nuances, and his stringent absurdity. As is O’Berski’s wont, there is the bare minimum of separation between “stage” and audience–the darkness of this little world, its chaos and confusion, is all over the viewer like the funky smells of old stuff and worn shoes emanating from it.

The apartment is inhabited by Aston, played by the tall and large Brook North in a belted leather coat, aviator shades and a floppy wig. Aston doesn’t have a lot to say, generally, and it’s clear from the beginning that he’s not quite right, although big and strong. When he finally does tell a story, it becomes the emotional center of the play. North beautifully reveals the man behind Aston’s abstracted, affectless exterior, the soft vulnerable core so well wrapped in coat and dark glasses.

The play opens with his return to the apartment with a talkative homeless man, Davies, who Aston has just rescued from a bar fight. John Honeycutt’s performance as Davies is outstanding. Strict verisimilitude might require somewhat more dirt ingrained on his clothes and skin, but Honeycutt has caught the unnerving mixture of groveling hostility, pitiable boasting and outraged pride that one finds in long-homeless men. He exhibits their feral cunning that combines false innocence with instinctual jockeying for self-advantage, and that makes taking in strays such a dangerous business. Aston wants to hire him as caretaker of the apartment building.

Just when Davies has begun to think that he can switch this situation around, from the being the visitor there on charity to being the man in charge, in pops Aston’s brother Mick–gorgeously played by Ryan Brock in his swaggering explosive mode. Turns out it is Mick’s building–and he wants to hire Davies as caretaker. Naturally, this leads Davies to attempt to play the brothers off against each other, and to the funniest of the miscommunications with which the story is rife–later Mick says, no–he wanted a decorator, not a caretaker. The whole play pushes at the problems of saying what one means, and of hearing what others say.

Another motif runs through the work, that of insiders and outsiders, or “foreigners.” Who belongs together, and who is “other?” Who’s crazy, who’s normal? Who’s playing on your team, and will they defect? In the end, Pinter takes a position…but it could shift. 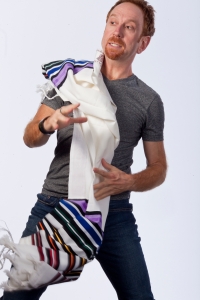 Whew. 2014 was another amazing year in Triangle theatre, but there’s little time off for the avid audience. 2015’s season starts right up on Jan. 2 with South Stream Productions presentation of Pinter’s The Caretaker at Common Ground. If Pinter’s not tough enough for you, try Wrestling Jerusalem, at PlayMakers PRC2 Jan. 7-11.

A one-man show, written and performed by Aaron Davidman, the work follows Davidman’s travels in Israel and Palestine as he attempts to unravel this knot of troubles, “to try,” in his words,”to understand the nuance and complexity that lives in the hearts of the human beings at the center of the conflict. Part personal memoir, part transformational theatre, in addition to myself, I play 17 different characters whom I meet along the way, each with his own story and perspective to share.”

As I’ve mentioned before, the PRC2 series is not just about watching a show–it’s about having a discussion afterwards, since civil discussion of intractable matters is one of the key roles of theater in society. I am deeply grateful to live in a place with real theatre that does just that, and deeply admiring of theatre leaders who bring tough work and defend it against all the forces of dilution and silence. You may have read of the recent firing of the artistic director of Washington, DC’s Theater J, Ari Roth, by the board of the Jewish Community Center, of which the theater is a part. In an unheard-of show of support, 60 or so artistic directors from theaters around the country sent an open letter of protest. I am proud to say that our own Joseph Haj, producing artistic director of PlayMakers–who keeps bringing us work like Rodney King and Wrestling Jerusalem–was one of the signatories. You can read an interview with Roth on Howlround here.

Hard on the heels of that show will come the eagerly awaited new work by Howard L. Craft, Freight: The Five Incarnations of Abel Green. Directed by Joseph Megel and performed by the talented Alphonse Nicholson, the presentation by the StreetSigns Center for Literature and Performance will play in UNC’s Swain Hall Jan. 8-24.

Also opening Jan. 8, at Manbites Dog Theater, VECTOR‘s Habitus, an installation/performance by dancer/choreographer Leah Wilks and video/virtuality wizard Jon Haas. All this and more before the month’s half over. Rest now, ye merry ladies and gents–no rest in the new year. 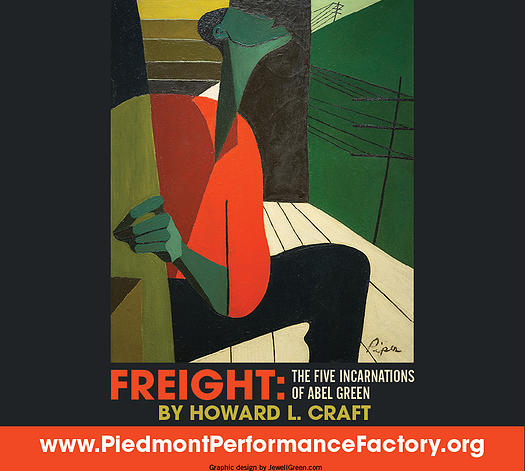 This article originally appeared in print in INDYWEEK, 1/8/2014, with the headline “Who’s afraid of getting old?” and online on Indyweek.com with the title “Two adventurous couples in Seascape.”

Edward Albee has written many plays of a scale suitable for production by small, even ephemeral, groups in modest black box spaces. Mostly Albee requires ruthless engagement with intimate human passions and a vast appreciation for foible and anomaly.

Theater artists are not the only ones with those qualities. Many attorneys exhibit them, too, and it’s an attorney who directs Albee’s relatively gentle 1975 Pulitzer-winning Seascape, in which a quartet—one human couple, one giant sea lizard couple—poke and push at one another as they struggle to figure out how to get on with life on the far side of middle age. Brook North organized South Stream Productions in order to put on the three-actor play Copenhagen a year ago; Seascape is his first production since.

After some initial stiffness, Julie Oliver and John Honeycutt, as Nancy and Charlie, sashayed through the skirmishes of the long-married couple just after Charlie ‘s retirement. They are on a beach. He’s trying to nap; he’s “earned some rest,” he says. Nancy, though, is all for action. In her mind, now that she’s gotten her family raised and her man back from the world of work, there’s a new kind of freedom. She’s all for a course of action radically different from any they’ve known. She’d like to sell up and make a vagabond life, going from beach to beach. She wants to see far continents from their coastlines.

The first act sets up the questions, philosophical and practical, facing Nancy and Charlie, and airs their past while quickly limning their psychologies. This is a wonderful role for Oliver, and she goes to town with it, delivering Albee-esque bombshells with utter cool. Honeycutt is more quietly expressive, making his explosions more unsettling (and he’s as charming as ever, with that twinkling eye), but you have to like talk to appreciate this play. The people can hardly move about—much of the stage space is filled with an encroaching sand dune, which Nancy sometimes mounts in her pushing at the boundaries of their small flat space. She prods Charlie into telling of his glorious experiences of sinking underwater and becoming one with that liquid environment. Then she nags him to “go under” again.

In the meantime, the lizard couple, Leslie (Ryan Brock) and Sarah (Samantha Corey), having completed their fertile years, have decided to go up, and explore life on land. As Act 2 opens, the lizards come over the dune. From this point, South Stream’s Seascape is delightful. Brock and Corey are fantastic, their physicality increasing the sense of pressure in the scene. Shannon Clark’s costumes, with stupendous tails, cover them completely, leaving only their faces to be made up in beautiful green and yellow patterns. The interactions between lizards and humans are enlightening to all, and often evoke gusts of laughter from the audience. What a great start to the 2014 year in theater.