The dances are studded with moments that seem like drawings on the stage. This is one from poem, July 15, 2014, Reynolds Theater. Photo: Grant Halverson, ©ADF.

Tere O’Connor Dance presented two more works in its American Dance Festival series on the 15th in Reynolds Theater, and another on the 16th. Secret Mary (2012) and poem (2012) are, the word is, “interconnected” with Sister, which was danced Sunday in the Ark. The final dance BLEED is meant to be the culmination of a two-year-long project during which O’Connor made the first three with different casts and different “source material.” The ADF presentation of all four dances is the first time they’ve all been performed together, in sequence. BLEED is its own dance, but having seen the other three, it does look like Connor put the earlier ones in the blender and hit chop before pouring all eleven dancers onto the stage. You could see whole chunks of previous dances adrift in the movement soup. Possibly this takes the idea of re-mix a little further than is useful.

I was quite taken with Sister, but maybe it requires the humidity and closeness of a space like the Ark to juice up this work for me. In Reynolds, up on the stage in a cool room, the dances seemed less like important communications from the nonverbal world than clever mind games set on bodies. The distinctive combination of different movement types with piquant gestures of O’Connor’s devising began to feel more contrived than inventive. Neither Secret Mary, for four dancers, nor poem, for five dancers, has anything in the way of emotional force, narrative arc or dramatic tension; both do mimic life in its erratic swing between exhilaration and boredom, with long marches and languid pauses along the way. Sadly, all of O’Connor’s sparkling variations in movement, dancers, lighting and sound could not counteract the deadening effect of his long pauses. Another problem was that each dance included a dancer with noticeably more refined technique than the others, which skewed the design because the eye wanted to linger on that one. An even bigger problem was that the two dances, performed without intermission–the two casts cross leaving and arriving–were too much alike, as well as being too much the same throughout. One felt that both could have been stopped at any number of places, without detrimental effect. Judging from the number of people shifting and surreptitiously checking watches, I was not alone in this thought. 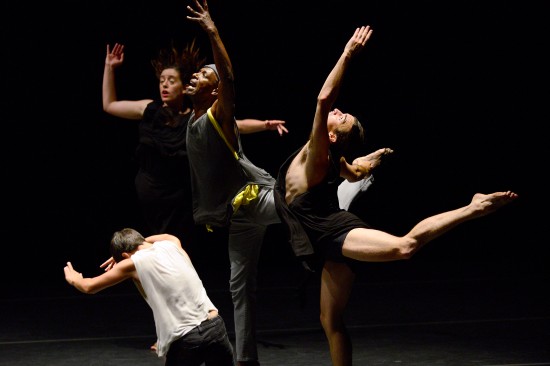 It’s possible that the fractured, elastic, circular way that we experience time, and therefore each other, is O’Connor’s real subject. You can just just glimpse the idea beyond the nearly opaque screen of smart dance references. That idea seemed to drive BLEED, which has a clearer structure (and being one dance, doesn’t go on at such tiresome length), and with eleven dancers, much more possibility of meaningful variation. It also makes more of the big rhythm of repetitions, especially of a ritual element involving circling and stamping (that, rather delightfully, seemed to refer to “dance to the death” of The Rite of Spring). The larger cast made the discrepancies among the dancers’ skills less noticeable–and there were some lovely duets for the two powerful men, Silas Riener and Ryan Kelly. And, as the photographs show, there were striking moments throughout, as well as bursts of wonderful kineticism and real dancing among the pauses.

Tere O’Connor will discuss his work tonight, July 17, at 8 pm in the Ark. Free. 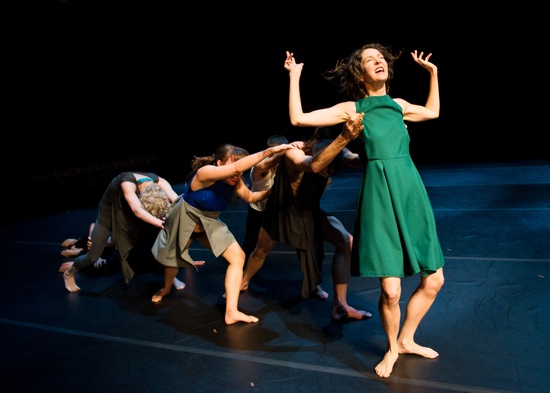 Tere O’Connor Dance in an arresting moment near the end, but not yet the end, of BLEED.          Photo: ©Ian Douglas.