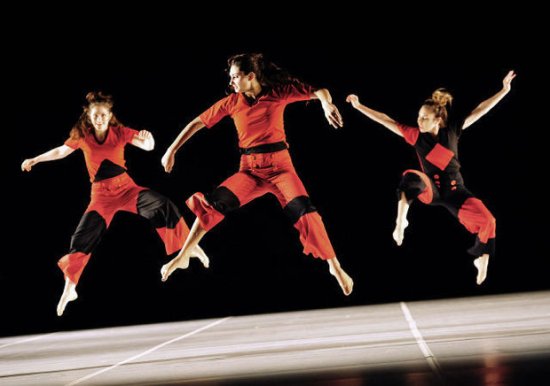 Make Believe by Rosie Herrera, The Dancing Room by Adele Myers, and Gates, by Vanessa Voskuil, all commissioned by the American Dance Festival and premiering this week in Reynolds Theater, make up this season’s Footprints program. Read my review in CVNC here. If it makes your blood boil, try another response, from Roy C. Dicks in the News & Observer. The program repeats July 24, in Reynolds Theater.

ADF 2013 will close this weekend, with Forces of Dance, four works by major choreographers, three of them performed by ADF students, in the Durham Performing Arts Center. Included will be new work by Twyla Tharp, made especially for this occasion; a great Bill T. Jones piece; a reconstructed Martha Graham dance (she was one of the four founders of ADF), and a beautiful solo by Lin Hwai-min, this year’s Scripps/ADF Award winner. It will be performed by Cloud Gate Dance Theater’s Chou Chang-ning.

A moment of Make Believe, by Rosie Herrera, at ADF 2013. Photo: Grant Halverson.