Warning: when artist you admire makes an admirable experiment that does not entirely succeed, the reviewing process may be painful to all involved.

The talented choreographer Renay Aumiller, inspired by her pregnancy and the birth of twin boys, has been thinking about change. Good change, bad change, and how difficult change can be, even if you’ve courted it. And if you’ve resisted a certain change, how can you alter your thinking to fit new conditions not of your choosing? As a dancer, Aumiller came at the problem kinetically, asking herself: If I change how I move, and how I make dances, will it change how I think?

Carley McCready in the cosmic static. Rehearsal photo courtesy of Rabble and Twine.

I was thrilled to received a press release from DIDA, Durham Independent Dance Artists, giving information on a new work NOT about self-identity, group identity or activism–but about something really big, way too big: The Mesoplanets orbiting far, far away. This one-night-only event occurred May 6, at the Living Arts Collective, and while it did not fulfill its potential, The Mesoplanets was a strong and consistently engaging debut into the arena of full-length staged works by Rabble & Twine.

Rabble and Twine co-founders, Luke Selden and Anna Seagrave, recently of Providence, RI, met in graduate school at Mills College (Oakland, CA), where they began merging their arts. Selden makes music and video; Seagrave makes dances. For this journey into the fascinations of space, in particular of those little planets that get no respect, Selden and Seagrave brought together another half-dozen dancers and four “noise makers,” including Allen Anderson with whom Selden had studied music at UNC as an undergrad, and Ellis Anderson of No One Mind–together their synth-duo is called sfm. There was also the one-named violinist Morgan, in a mask, and recorded speech by Helene Rosenbluth.

There was video background with wry voice-overs by Selden; one short side of the stage was banked by sound gear and musicians and a tiny “wing” for the dancers. The audience occupied the other two sides of the rectangle, and those on the long side, facing the video, would have had a much more complete experience of the work than I did from the short side, from which one couldn’t really watch the video while watching the dancers, choreographed by Anna Seagrave. The work’s three acts–The Known, The New World, and The Void–comprised nine dances, and one purely musical segment. The Mesoplanets is a very ambitious work, serious and sweetly humorous, and while it could use a little tightening, overall it was captivating. There was remarkably little dross and some standout moments among the several strong movement sections, and the music was intriguing, even mesmerizing, throughout–though especially compelling in Act II. Although I couldn’t give the video the attention it deserved, I could tell that its rhythms and rather magisterial pacing were key to the overall work’s coherence and sense of long journeying into the far unknown.

As a group, Seagrave’s dances investigated the characteristics of various mesoplanets, and of the people who dream of them. There was a great deal of emphasis on orbits and orbiting, which was strikingly effective in a kind of cat’s cradle dance for the ensemble and two long ropes. This piece went well beyond clever, into elegance and beauty, as it caught and spun the dancers in intersecting elliptical orbits–like the planets, always in motion but never free to leave their delineated paths. Anna Seagrave, Carley McCready and Aijia Nicole Bryant stood out among the dancers for their verve and elasticity. It was particularly nice to see McCready and Seagrave together, for the contrasts. McCready is small, lithe and sports a brown bob; Seagrave is taller, blonde and due to give birth in July. It was fascinating to see how differently the same movement sequences express from the varying bodily states.

The varying abilities of the dancers, however, were not always a benefit, and dragged down some of the larger dances, and there was a real problem with the recorded voice-overs. The sounded like they’d been recorded on a phone, by people without voice training; the volume was inadequate throughout, and sometimes the voice was covered completely by the music. If the spoken content is meant to be an equal partner with the music, visuals and dance, it needs some technical assistance.

According to Seagrave, Saturday’s performance was her last before her baby is due. But look for Seagrave and Selden/Rabble & Twine, perhaps in DIDA’s next season. They are welcome additions to Durham’s dance scene, and it will be very interesting to see what changes in Seagrave’s work with motherhood. In the meantime, we get to find that out about Renay Aumiller, now returned from her maternity leave (twins!). She will be presenting her new work, boneglow, at the Living Arts Collective June 2-4 as the DIDA season continues. Three shows only in that small space, don’t wait. Tickets on her website.

Denver Carlstrom and Aijia Nicole Bryant during rehearsal for the glow-stick storm segment. Rehearsal photo courtesy of Rabble and Twine.

The Bipeds in rehearsal for Stacy Wolfson’s Never, Enough, Better, Nothing, with the high-kicking Curtis Eller on banjo. Performances will be June 2-4, 2016 at The Shed, Golden Belt.  Photo: Alex Maness.

Durham’s DIY dance scene continues to move expansively into the nooks and small venues of the city. Do yourself a favor, local dance fans, and get over to Golden Belt tonight or tomorrow for a performance by the Bipeds Dance Company in collaboration with Curtis Eller’s American Circus. I attended their final rehearsal last night–the final, and first with the full band–and enjoyed myself thoroughly.

Bipeds artistic director and choreographer Stacy Wolfson had been talking on and off with Curtis Eller–their daughters are in school together–about collaborating. They started in earnest last September, and Wolfson began creating movement sequences to particular songs, sometimes incorporating some of Eller’s trademark stage moves. Wolfson’s dynamic, elastic style melds well with Eller’s jumps and high kicks, but where he climbs on the furniture, the dancers get down on the floor.

Most of the dancing is performed by the quartet of Renay Aumiller, Amanda Floyd Beaty, William Commander and Alyssa Noble, and on the small stage in the small space, even without a crowd, they neared the combustion point, with Amanda Beaty doing some particularly nice work.  The choreography is vivid, muscular and emotively clear as it quickly runs through a range of efforts and feelings in the pauseless, nonstop song and dance act. Sometimes the relation of the dance to the song is direct; at others, the song and dance are emotionally or tonally congruent, but not connected in any illustrative way. Eller is also very active on stage, and to some extent the singers Shea Broussard and Dana Marks join in, but the stand-up bass man (Hugh Crumley) and the drummer (Jack Fleishman) had of necessity to remain upstage.

The set-up in The Shed is charmingly down home. Wolfson is using part of the sprung floor constructed last summer by Renay Aumiller, Leah Wilks and friends, for RAD’s aerial performance. The floor was designed to be storable and portable and available for the dance community, and it makes all the difference in what the dancers can safely do. This work would fail on a concrete floor–the attack is too fierce, the dancers would hurt themselves. The availability of this floor is going to change local dance much for the better. But other than having a professional surface to move on, the room looks more like a living room, and the stage is lined with mismatched lamps that the performers turn on and off during the action. The big windows are haphazardly covered with swathes of cloth. There are about 50 chairs and a couch or two. And a great sound system.

Performances tonight, June 3 and Sat. June 4 at 8 p.m. in The Shed at Golden Belt, 807 E. Main St., Durham. Tickets in advance at brownpapertickets.com or at the door. The band will play on afterward on Sat. Dress to wiggle. 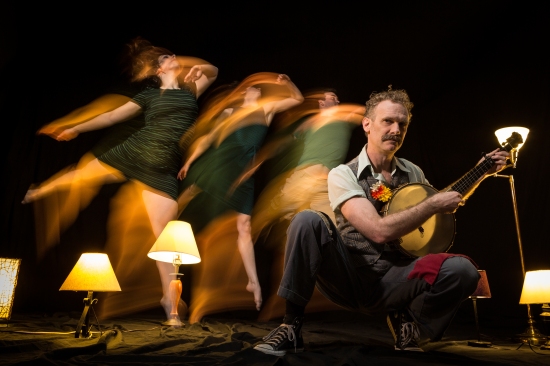 Never a still moment in Never, Enough, Better, Nothing. The Bipeds and Curtis Eller’s American Circus will perform their collaborative song-and-dance work June 3-4 at The Shed at Goldenbelt.  Rehearsal photo: Alex Maness.