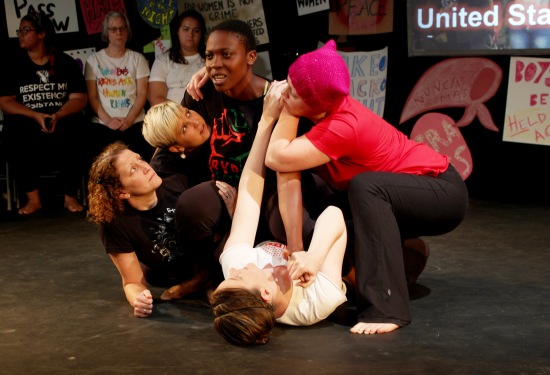 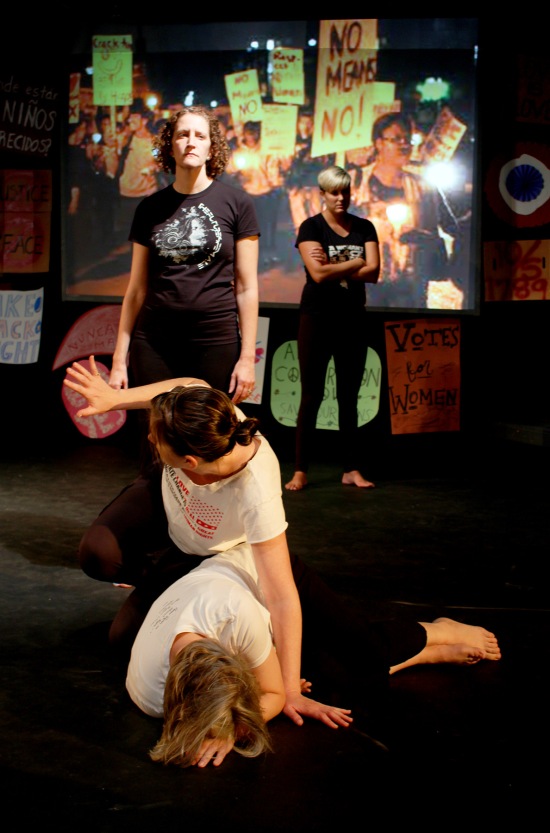 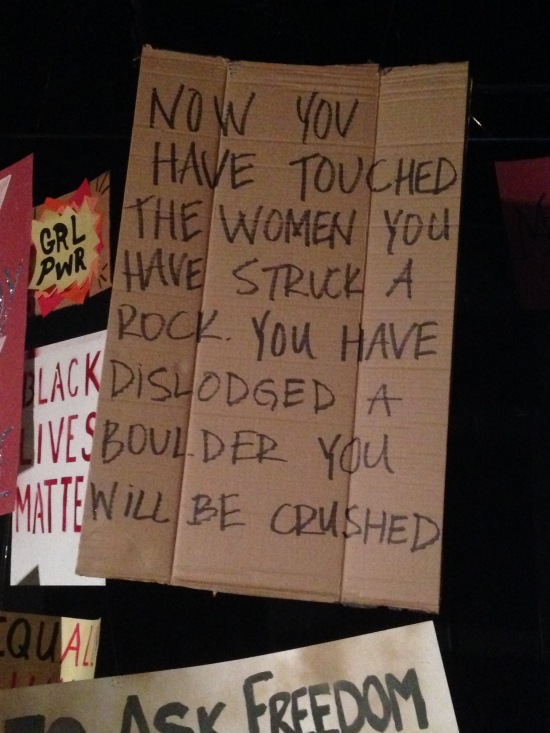 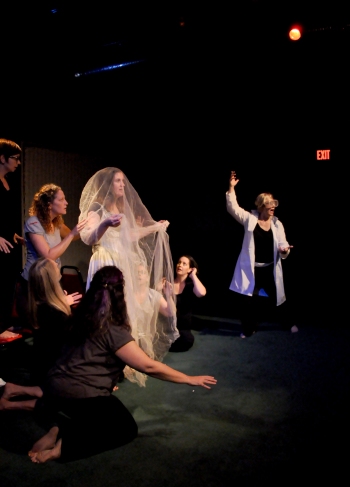 There’s this group–a tribe–a porous-bordered cell–of creative female performance artists in Durham who like to get together in the summer and work out their imaginations on a topic. Last year, Summer Sisters took on daughters and mothers with Alzheimer’s, working from Sarah Leavitt’s graphic journal Tangles: My Mother, Alzheimer’s and Me. This year, “gently led” by the fearless broad-thinking actors Rachel Klem and Tamara Kissane, they started with Mary Shelley’s Frankenstein as a way to look at the monsters within and without, and examine the meaning of monstrosity in the psyche and in society. MONSTER CAMP opened at Common Ground Theatre Aug. 28.

The Summer Sisters take their discussions, soul-baring exercises and theatrical experiments as the raw material for their “devised” theatre. In MONSTER CAMP, there are readings, singing, movement, stories, stylized action sequences and one highly dramatic soliloquy (Dierdre Shipman). Each woman wears some version of yoga clothes, remarkable for the jagged red scars stitched here and there. Some of the songs and readings are rounds, with the voices overlapping and circling. In fact, the sense of spiraling deeper informs the entire show. One of the loveliest things about this show is the paradoxical double spiraling–out to the edges of ideas and aloneness, and deeper inward toward acceptance and connection.

But a show it is, with a rather adorable resemblance to skits at camp. There are some bits that don’t work as well as they might, but others that give a jolt of beauty or comprehension. Don’t expect much polish–this work is too fresh to need buffing up. Two more performances remain. 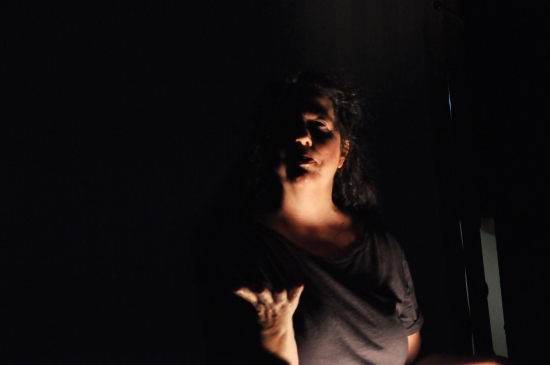 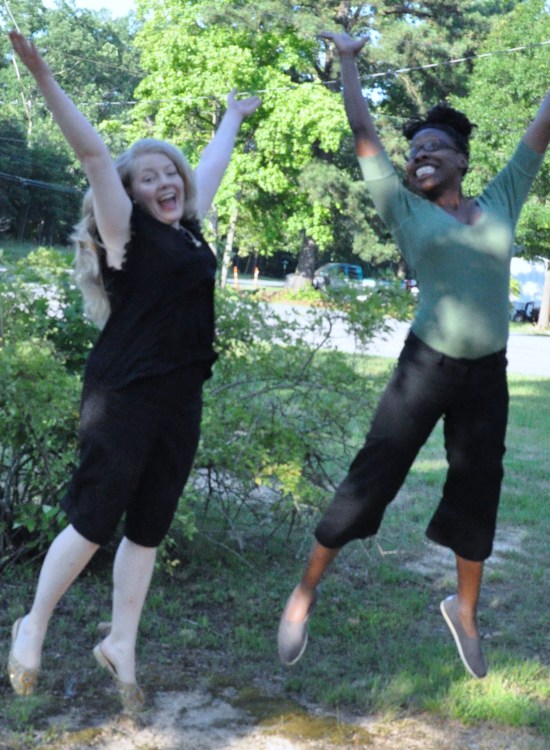 Durham’s theatre scene would be much the poorer had Rachel Klem not come to town. Subtle actress, incisive director, performance space owner and manager, producer, and general creative force, Klem, along with her husband Jeff Alguire (actor, designer, etc) have provided Durham with a small, flexible theatre in which all kinds of surprising and affecting work happens. In June, Common Ground made possible the presentation of works-in-progress by two extremely interesting actor-thinkers, who have written/are writing theater pieces taken directly from their own life experiences.

The monologue never has been my favorite mode of theater, but both DEBRIS, by Katja Hill, and THE VIRGIN COOKBOOK, by Lormarev Jones, were so engaging that I’m forced to reconsider my bias. After all, I’ve been thinking about their shows for two solid months, and still find them intriguing. Both women will be familiar to local theater-goers, and many will have seen Hill’s previous work about the trials and tribulations of becoming an actor. Jones, as far as I know, had not previously presented any of her own writing, but has enriched many productions with her intense presence and gorgeous voice.

Hill took on the universal themes of life, death and stuff. While the presentation left much to be desired (she sat at a table with a notebook, the table forming a barrier between her and the audience), the content was engrossing. Hill’s mother, a Finn who married an American, lived in Sylva, NC. Cancer attacked and advanced rapidly; Hill and her then-boyfriend barely got her back to Finland to die. With what seems to me amazing fortitude, Hill wove together her mother’s stories–her life, her romance, her cancer-on-a-credit-card, her work in the plant department at Walmart, her death and its aftermath–and laced them to her own stories with ribbons of wry humor, sorrow, joy and exasperation. Anyone who has dealt with the plethora of objects left behind by the beloved dead would have gotten the metaphors instantly, but for anyone who hadn’t, Hill had a selection of stuff you just don’t know what the hell to do with for show and tell–and a telling costume. Hill’s a lovely blonde with a natural elegance which she almost disguised in grubby pants, a Walmart employee T-shirt (store number on the back) and a Nordic girl wig with long blonde braids, sloppily covered by a kerchief. Looking a bit like orphan Cinderella in the ashes, she unreeled the silk of a lifetime, opening its twist for us to see the strands, uneven but knotless. Lives are plied together like yarn. Mother’s strand, father’s strand; a third ply for daughter. Mother’s strand attenuates, leaving a snarl of broken fiber, but the spinner picks up another strand–the boyfriend, now the husband, is spun into the twist during the course of the story.

It takes a brave heart and a clear mind to formulate and present art like this, so close to the bone, seesawing between personal sentiment and universal feeling in a delicately balanced spiraling structure. Be on the lookout for DEBRIS when it falls on us again, sparkling like a diamond its own dust.

Lormarev Jones’ THE VIRGIN COOKBOOK was not as highly developed as Hill’s work, but rather more surprising. Maybe 30-year-old sexual virgins are not as rare as I think, but I am sure that there are not many who will get up on stage and tell you all about it. Jones retails some hilarious anecdotes about her upbringing: her mother worked with AIDS patients during the early awful years of the epidemic, when they were all dying. Determined that her children would not die for lack of knowledge, she made sure little Lormarev was informed far beyond the norm for her age group. On top of that, Jones’ grandfather, with whom she lived part of the time, encouraged her in no uncertain terms not to waste her time on boys. On top of that, Jones attended college at Meredith, the Baptist women’s school in Raleigh. The upshot is–she’s a virgin, and pretty much all her acquaintance gives her grief about the fact. Currently, Jones is working toward an MFA in theatre from Sarah Lawrence, and is planning to fully develop THE VIRGIN COOKBOOK as her capstone project for the degree.

In June, it was still rather rough, although the scenes in which she plays her own grandfather were beautifully realized. Jones’ tends to look down while she speaks, breaking eye contact with the audience, which diminishes her strength, but it flares up immediately when she raises her implacable virgin’s eye. She makes a lot of jokes, and never brings up the power ascribed through history to the virgin woman, but this show certainly makes you think about it. There’s a lot to be said in favor of experience, but you can always get that. You can’t ever retrieve innocence, and to have held onto it for 30 years strikes me as somewhat of a modern miracle. This is another show to look for in its next iteration.

And beginning tonight, for three nights only…

13 of the Triangle’s talented women of theatre have gotten together to workshop a piece of performance art based on Sarah Leavitt’s graphic journal TANGLES: MY MOTHER, ALZHEIMER’S AND ME. These “Summer Sisters” are year-round fearless. They take on loving, aging, loving, family, care-giving and did I mention loving even through the forgetting?