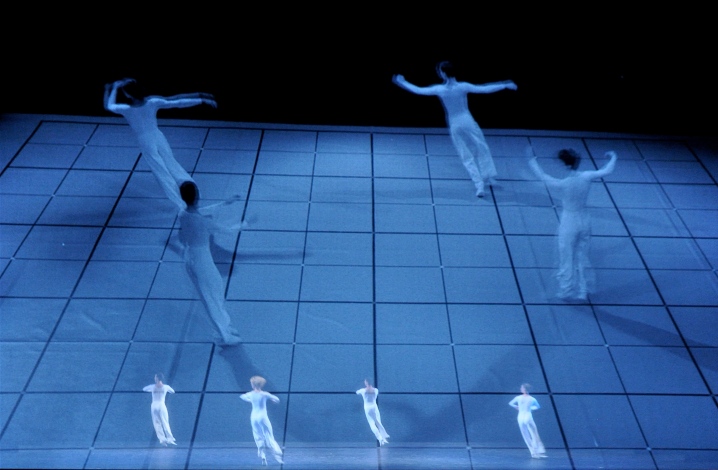 Will art last, or is it strictly of its time? That’s always a question with new art, but the answer of necessity is slow in coming, and must be checked and perhaps revised as the generations pass. So one still cannot say that the beautiful, joyous, cunning 1979 collaborative work DANCE will last forever, but one can say that, 38 years after its premiere, it remains kinetically vital, visually challenging, and aurally propulsive towards spiritual uplift. Carolina Performing Artspresented the re-created work by choreographer Lucinda Childs, visual artist Sol LeWitt and composer Philip Glass in Memorial Hall as part of the ongoing Glass at 80 festival. 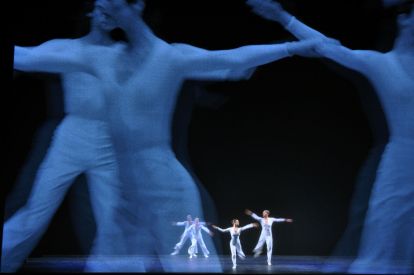 From my review “Ephermerality Reconstituted in DANCE at CPA“published 2/8/17 on cvnc.org. Click through to read the whole review.

…an artwork that draws its power from images of dance so ancient as to be archetypal – dance as communal expression, dance as celebration of innocent joy. 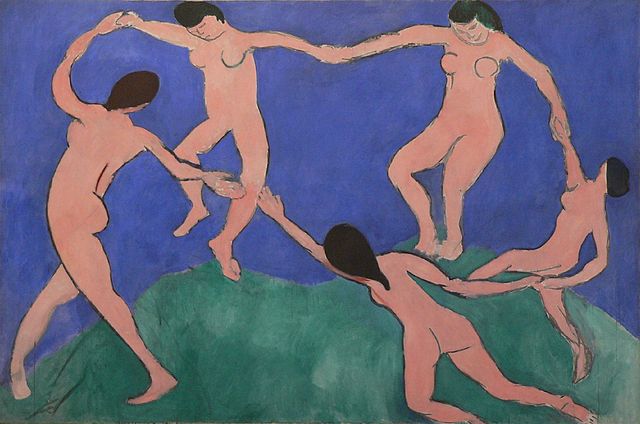 Henri Matisse, Dance I, 1909, in the collection of the Museum of Modern Art, NY.

Childs, Glass and LeWitt were all among the art avant-garde in their youth. LeWitt died in 2007, but Childs and Glass continue to push the forward edge of art in their 70s and 80s.

That the creation of a performing arts series is an art in itself was demonstrated last night during the performance of the complete set of piano études by Philip Glass, part of the Glass at 80 Festival, ongoing at Carolina Performing Arts. The 20 études were performed by 10 fine pianists, starting with Glass himself, in the beautifully renovated 450-seat Moeser Auditorium in Hill Hall, for which this event constituted a kind of grand opening (although it had been previously blessed by a dance–more on that later). As the audience filled the hall, we saw the gleaming grand piano center front, with bench–and nine more benches in a line upstage. Each bench had already been adjusted for the pianist who would use it. It was a wonderful visual.

Composed over a period of years (1991-2012) during which Glass made many larger pieces of music, the études in a way comprise a sketchbook of the composer’s thinking, and–although the analogy is not exact–the performance resembled a well-chosen art exhibition of artistically related meditations on a single subject by a master.

Music is, obviously, different from visual art in that it is not copied or referred to, but interpreted when taken up by a musician not the composer. Each player’s unique touch, style and essential personality makes something subtly different from a score. It would’ve been no fun to have 10 people play the precisely the same music, but having them each play a segment of the series worked beautifully to show how much interpretation can range, even in the performance of music by a living composer who is right there in the room. But hearing the entire sequence in one concert played by such different personalities (their biographies tell of their work and passion and achievements–on the website) was fantastic also because it made so many of Glass’s concerns clear–not just the crystalline patterns within the modules, or the patterns grown like crystals from the modules, or the emotional tone of particular chords and notes and melodic lines, or the effect of tempi, or color and texture in sound, but issues of oppositional balance; density and space; mass and ethereality; opacity and sheerness, and the layers in between.

What can I say? Hearing mature Glass play younger Glass was very wonderful. Everything else fell away, even the handsome room with great warm acoustics, and the other 449 extremely quiet and attentive listeners. Following him, for études numbers 3 and 4, came the youngest pianist in the program, Margaret Lynch, a junior at UNC-CH (a student of Clara Yang, who opened the program’s second half), who has taken every opportunity to work with the great pianists who have come to Carolina during her time there. Whereas numbers one and two had seemed composed of a play of complementary colors (chartreuse and burgundy), Lynch’s pair seemed made of shards of light changing places at a fast tempo. She performed beautifully, if with a high degree of tension beneath the polish and aplomb.

Mick Rossi, in a zippered black leather jacket, came next, and he had all the time in the world, drawing out the spaces between the dense, laden notes. Jenny Lin played numbers 7 and 8, leading us underground to caverns sparkling with mineral growths. Michael Riesman seemed to take us on an adventure with matter and anti-matter. That was just the first half.

After an intermission during which all were served with birthday cake and coffee, Clara Yang resumed the program with numbers 11 and 12, which struck me as very physical, with the music alternately wrestling and dancing and running wild with a sparkler and Yang keeping up without turning a hair. Aaron Diehl didn’t have any hair to turn, or it would have been jumping as he gave numbers 13 and 14 an almost stride blues interpretation. I was looking for him to kick over the bench any second. Timo Andres played the romantic daylights out of 15 and 16, so passionate and heart-stirring. This was the third time I’ve heard Andres, who is also a composer, and I find him very affecting–and not just because he’s tall and thin with barely controlled curls and wears neat-fitting suits and good leather shoes. He seems filled with longing and determination, which get out through his long fingers.

Anton Batagov had a regal and relaxed way with numbers 17 and 18, then Maki Namekawa swept on wearing hot pink pants and sandals under a gorgeous patterned robe, and finished off the series with a magisterial clarity. Her recording of the complete piano études went home with me from the merchandise table.

This was a very special event, brilliant in conception and beautifully carried out. I appreciated the true diversity of the cast, and the complete lack of cant about diversity. Complete in itself, the étude program also formed a vital facet of the entire Glass festival, which has been put together to serve a marvelous combination of artistic, pedagogic and liberal arts objectives while offering all sorts of excitement and enjoyment.

This kind of thing could give elitism a good name. It certainly puts a mighty glow on the oldest state university in the nation.

Tonight: the recreation of Lucinda Childs/Philip Glass/Sol LeWitt DANCE. Check the website for info on talks with Glass and the remaining performances.

Wow. Wow to the nth degree. The Bruckner Orchester Linz, under Dennis Russell Davies, performed three Philip Glass works last night, Feb.1, in Memorial Auditorium as the kick-off for Carolina Performing Arts‘ 10-day  Glass at 80 festival. Davies and Glass are old friends, and Davies is considered to be one of the foremost interpreters of Glass’s music. Indeed, Davies initiated the commission for the first work the orchestra played, Days and and Nights in Rocinha (1997), which Glass had dedicated to the conductor.

Awash as we are in a fetid swamp of ugliness, I’m craving beauty like a smoker craves a cigarette, and beauty I got–full-blown beauty that for its glorious 20 minutes, obliterated all the pain. Somehow (out of Glass’s prodigious output) I had never heard Days and Nights in Rocinha. Um, not sure how I had been living. When music gets me on its wavelength, I get tapestries of color–more like the Northern Lights, evanescent–but sometimes, as with Glass, I also get a tactile sensory experience, and occasionally even scents. In Rocinha I saw every shade of green, rough browns, sapphire blues, blue-black, chrome golds and phosphorescent sparkles, all tossing like tall trees and lapping like calm waves. I could hear the palm fronds clacking, muted traffic, the laughter of dancers, tree frogs and bright birds. And always, the heartbeat of the ocean, steady under the the swooping joy. When the room came back, I felt as if I’d been caressed with flowers, rubbed down with sugar and wrapped in thick velvet–cares sloughed off, bitter barriers dissolved, skin all alive to the wonders of earthly life. What a gift.

I rushed right out to the merchandise table at intermission, but they did not have that recording. It is available, however, on the CD Orchestral Music (vol. II) with other pieces, and on iTunes (find out more on Glass’s supremely well-organized website).

The rest of the concert was nearly as soul-stirring. One reason I like Glass’s music is that the beats, no matter how complex, feel to me like the heartbeat of–well, everything alive, and of the fluid rock beneath the earthy crust. During the Violin Concerto No. 1 (1987) I was struck by a memory of lying on the ground in the front yard when I was about five, ear to the earth and eye on the tiny blue flowers pushing up through a patch of moss. In the concerto, that vital force burgeons into tall forests of sound, thick with fleeting textures. It was all I could do to stay in my seat throughout the torrent. Soloist Robert McDuffie’s violin darted through the forest, and danced with the pixies, and snuck around the trees to surprise from behind. It was fantastic. At the end, after several long breaths, Davies put down his baton and clasped McDuffie in a beaming hug, while the whole orchestra glowed and smiled.

The concerto has a normal concerto structure, fast-slow-fast, but the new Symphony No. 11 (which has premiered the night before, Glass’s actual 80th birthday, in Carnegie Hall), also in three movements, felt not just bigger, but much much freer, running off to explore all sorts of tangents. But always, there’s that underlying beat, so reassuring, and all the forays into the bright world come home to it. The percussion in this piece is particularly great. I’d go back tonight if they were playing it again, and stand in back so I could dance instead of driving my neighbor crazy swaying and bobbing in my seat.

No. 11 has in spades the other thing I find so powerful in Glass’s work: the sense that the music has completed itself emotionally as well as mathematically, that it is not a collection of fragments waiting for the listener to give it meaning. I can’t begin to say how he does it, but from the beginning you feel the inevitability of the music circling back, like you feel the inevitability of an arc closing into a circle, with all the colorful patterns coalescing into white light, white heat, as if being put through a reverse prism. But Glass, when he brings it all around, leaves one infinitesimal point open for the energy to arc across–he keeps it alive and sizzling. Complete, but not moribund.

Some of the remaining of the festival is sold out (!), but there are still a very few tickets available for DANCE, and some for the Heroes concert this Friday, for Dracula with the Kronos Quartet, and amazingly, for Glass together with Laurie Anderson. Don’t miss out.