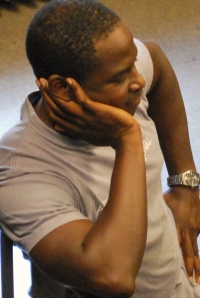 Gaspard Louis, the Haitian-born dancer and choreographer who settled in Durham in 2009, presented his first Gaspard & Dancers annual concert that year. It was successful in a mild sort of way–enjoyable, but the work was a little too derivative of the Piloblean style in which he had been immersed from 1996-2001, and the dancing was uneven. Louis has continued to work the dream along with his day job as creative movement outreach director for the American Dance Festival: This year’s fourth annual concert shows Louis’ growth as a choreographer and demonstrates that he has been able to draw a skilled company of dancers around him, dancers capable of engaging and collaborating at his level of imagination and ability. Gaspard & Dancers will appear again tonight, Oct. 19, in the Reynolds Theater at Duke University.

Tonight’s concert-goers will not have the fun of seeing the company spell out a birthday message to Louis’ wife, Jodee Nimerichter (director of the ADF), in which, naturally, Gaspard himself formed the “I” in “I love you,” but nonetheless they should receive gifts of pleasure, beauty and passionate empathy. 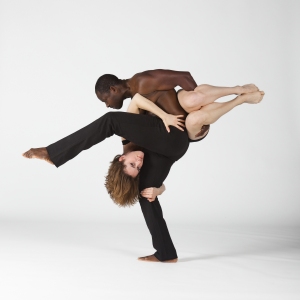 The evening opens with a premiere by Louis with the two other dancers, Kate Currin and Sebastian Alexis. Clever, physical and stylish, Rubix is an ever-shifting puzzle of parts fitted and refitted into numerous possible combinations, set to an interesting score by Paul Leary. It is the least dancey of the evening’s works, and involves much shape-making and weight-sharing in service of dramatic forms, which are intensified by Jakki Kalogridis’ excellent black and white costumes and John Kolba’s sharp lighting. Louis is adept at the deployment of lifts, inversions and corkscrewing movements that evolve into spins. In a particularly thrilling moment here, he spins, arms extended horizontally from his shoulders, moving ever faster as Kate Currin clasps his neck, her body flying outward with the centrifugal force.

The heart of the program is Louis’ Souke, which means “shake” in his native Haitian Creole language. Torn by the suffering and death in Haiti following the terrible 2010 earthquake there, he struggled to find a response in his art, even while organizing benefits and teaching crash courses in the language to those on their way to help on the ground. Not until 2012 when he was completing the work for his MFA degree in dance from the ADF/Hollins program, was he able to choreograph a coherent dance in which motion and stillness combine to convey the horror, hope and heavy sorrow. I had the good fortune to watch Louis rehearsing his ADF student dancers as he developed the work in July, 2012, but lesser upheavals in my own life prevented my seeing the finished work until last night.

From this opening moment, when one upright survivor turns to see the pile of bodies and begins to pull them up–all alive–the dance shakes and lashes you through the shocks and aftershocks, culminating in the sorrowful relinquishment of other bodies to the mound of the dead. To richly textured, emotional music with driving rhythms by Randall Love and Paul Leary, the dancers shake, waver, catch, spin, race, collapse and rise with crisp speed and an undaunted quality. The poignant emotion comes to a stabbing conclusion as the living hands let gently fall those of their dead. 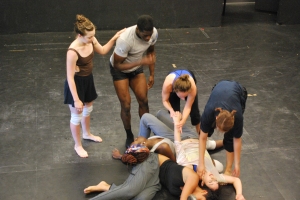 This is a mature choreography. It draws on Louis’ experience as a dancer, but it burst the bonds of habit with its heartfelt force; it is a beautiful example of art expressing feelings for which words are inadequate. I expect it will remain in his own repertory, and most likely be taken up by other companies. Perhaps needless to say, Louis received his Master of Fine Arts degree after presenting this work.

There follows a sexy dance so bursting with life-force that the cadmium 0range Lyrca costumes (by Melody Eggen) appear to have shredded from the energy. Andy Hasenpflug provided the magnetic music to which Louis and Kristin Taylor get elastic. Magical Cusp is from 2010, but its magic has not faded a bit–and it was  perfect to bring us back from Souke.

After intermission comes a special guest appearance by Gregory B. Hinton, performing (at age 63) the demanding 1947 Tally Beatty solo, Mourner’s Bench, which balances Souke with its deep emotion. Mourner’s Bench is tough to perform and tough, like any mourning, to watch. It’s music is the spiritual “There is a Balm in Gilead,” but watching Hinton, one had to wonder if there is enough balm, even in Gilead, for all the suffering.

Fortunately, the evening closes with a lovely new work that is itself a balm. Louis, in collaboration with the nine dancers, has made something quite balletic in Annatations. The word combines the Italian “andare,” to go, with the Latinate “natation,” swimming, and makes a play on “annotations.” The music, written and played by Joshua Starner on solo cello with electronic assistance, is quite beautiful, evoking dream-states and the languid pleasure of underwater movement. Jakki Kalogridis’ delicate costumes reinforce the dreaminess, as do Steven Silverleaf’s four pale sculptures suspended above the stage–perhaps they are swimming angels. The sense of connectivity is very strong in the choreography and in the dancing. There’s an emanation of love, of relieved safety…perhaps an idea that the dead are not truly lost to us. Some of the dancing is very beautiful, including that by Alain Molina, who physically is the work’s pole star. Molina was a founding member of Carolina Ballet, but has not been seen there in quite some time. His grace and heart were instantly recognizable, and well-matched with the same qualities in Gaspard & Dancers. 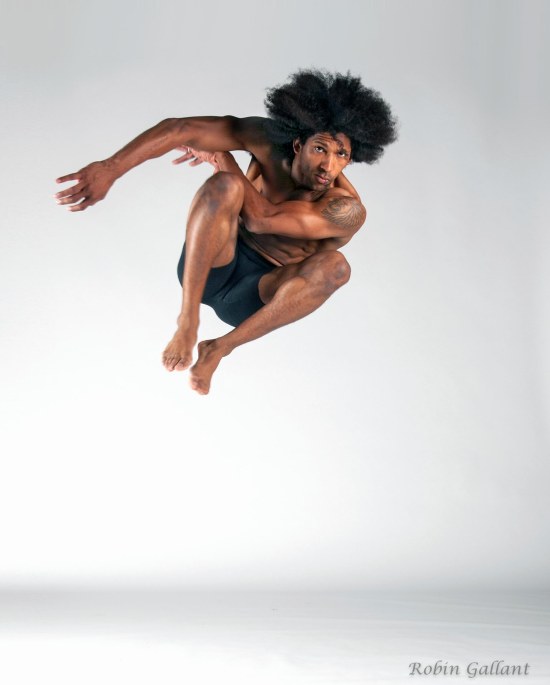