Monica Byrne, author of The Girl in the Road, at the paperback release reading at Letters Bookshop. Skylar Gudasz also sang.

Two multi-talented women appeared tonight in downtown Durham’s only bookstore, Letters (440 feet from The Star’s desk in darling downtown Durham). The paperback edition of Monica Byrne‘s well-received first novel, The Girl in the Road, has just come out, and Byrne interleaved her readings with beautiful songs written and sung by Skylar Gudasz. It was a very Durham event: wine was served, along with Krispy Kremes from the new store on Hillsborough Road (finally!).

Yes…they are wearing their high school prom dresses. I think the answer is, because they could. One presumes they had their art to keep them warm on this frigid night. Or maybe the tiaras were doing the job.

Letters Bookshop owner Land Arnold has both hard and soft cover copies of Byrne’s book, and a set of shelves well-stocked with books by other North Carolina writers, as well as ever-growing sections of new and classic books of all sorts. You can sign up for email notifications of readings and other events if you drop in and browse. He will order anything you want if he doesn’t have it.

Of all the changes in downtown Durham, the closure of the Book Exchange came hardest on me. But now there’s Letters. It is not as idiosyncratic, but you can find things yourself: the books are shelved alphabetically by author, rather than by an arcane system understood only by the Book Ex’s staff.

Durham writer Monica Byrne‘s willfully provocative new play previewed last night, and will have its official world premiere tonight at Manbites Dog Theater. It hooks you right from the start–what a title! Produced and presented by the Little Green Pig Theatrical Concern, its 13-member cast is tautly directed by Jaybird O’Berski. It’s about sex, personal freedom, love, and the destruction of the nation-state, more or less in that order of importance. Speedo takes place in the Olympic Village, where athletes from many cultures receive some special training in polyamory and other forms of boundary-busting, taught by “ambassadors”  from a cult idolizing a diver named Arturo Tarantino. Tarantino espoused a philosophy of separating oneself from artificial, fear-based constrictions like sexual monogamy and jealousy, and instead making love with many people. He believed that this would erase boundaries between people, lead to world peace and the dissolution of geo-political borders. He called his desirable state of loving psycho-sexual satisfaction “the zone.” One day Tarantino got so completely zoned out that, after executing an “impossible” perfect dive, he just disappeared in the bubbles. His yellow Speedo floated to the top, to become a relic for his followers, and a symbol awarded to trainees who see the light and take off their clothes for this new world order. 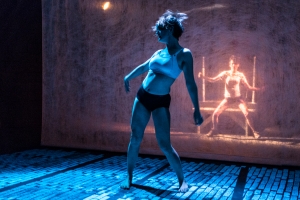 There are so many things to talk about here. The content, as illustrated by the preposterous story, has challenges for viewers all along the belief spectrum. Although the play declares the glory of polyamory, asserting its naturalness, it looks clearly at one of its costs. Main characters Khala (Nicola Bullock) and Mia (Caitlin Wells) start off as a happy married couple (trap shooters from Team USA); by the end, Mia’s wrecked and stranded on the shores of Khala’s new boundary-free world.

Structurally, the play is very clever. It’s outrageous enough to get under your guard, should you be so old-school as to have one, and Byrne and director O’Berski are very skilled at getting you to immediately suspend disbelief and go with the story. They are greatly aided in this by the Olympic-coverage-style video designed by

Alex Maness and Don Bonné. Speedo‘s outrageous enough, but not so outrageous. The only thing I found shocking was the play’s un-ambivalent declaration in favor of unprotected sex–no condoms for all these couplings. In fact, the play’s most memorable line, uttered by Khala after her training partnering with Suileman (Allen Tedder, very elegant), is about his having painted the walls of her vagina with semen graffiti. In Arturian Sex, not only must there be skin-to-skin contact, but exchange of fluids.

Yep, that’s the natural way. But making this philosophical statement strikes me as significant and ignorant, joyous and idiotic, all at once. We are hardly living in a post-AIDS world, let alone post-Herpes or post-Gonorrhea–that formerly-minor sexual pest is now drug-resistant. But Byrne can never have lived as an adult in a world without the threat of sexually transmitted diseases, and, oh!– that unfurling of the banner for sexual freedom for the glorious bodies of youth, the freedom to unsheathe –it’s an alluring, lovable cause.

And so impractical, as are the logistics of polyamory (love may be endless, but time is not), that one suspects Tarantino’s Yellow Speedo of being allegorical, on top of fantastical. There’s kind of a Liberty Leading the People quality to it, with the playwright waving the flag and urging the bold freedom fighters over the barricades. At any rate, there’re about five plays worth of ideas woven into 90 short minutes, so there is bound to be a certain amount of abstraction.

The ideas take precedence over relationship development. Khala and Mia are such interesting characters that–although Bullock and Wells were quite fine–I would have liked them to live more fully, to seem less like animations Byrne designed to illustrate her concerns. On preview night, I thought the whole play more mechanical, less vibrant than Byrne’s earlier, brilliant, What Every Girl Should Know. It is, however, far more complex and ambitious than Girl, and written in a far more bold and confident voice. One thing that makes Speedo so intriguing is that it is part of the Monica Byrne story, unfolding on the larger stage (and her Facebook page, and Twitter feed…). Byrne’s first novel also came out this week. Read the Indyweek review of Girl in the Road here.

But back to Tarantino’s Yellow Speedo. Strong cast, all appealing, though there is not enough nudity, and there is considerable weirdness with accents. Ishai Buchbinder is adorable as a Ukrainian badminton Olympian, but it’s unnerving when he slips into his Irish accent. Kana Hatakeyama, kicking ass as a North Korean field hockey competitor, lets her accent go all over the globe. Possibly this is intentional–no border in the new world order. Jess Jones excels as Fatima, a lightweight Bosnian boxer with plenty of nerve and a very enticing headscarf.

The design work for the show is particularly strong, too. Steve Tell’s lighting, the costumes by Marlyn Wells and Dana Marks,  Matt Hooks’ set, and especially, the smart music track by Adam Lindquist, all serve the greater good with panache. Director O’Berski has successfully recombined many of his best structures and gestures here. The overlapping scenes are done with finesse, and working with choreographer Nicola Bullock, he’s put together some great rushing, stage-crossing movements using the large cast. (Bullock and friends have a dance performance coming in June–more on that soon.)

Preview night was sold out, and Manbites Dog reports that tickets for this weekend are nearly gone. The show runs through June 7, but you might want to go ahead and buy advance tickets here. 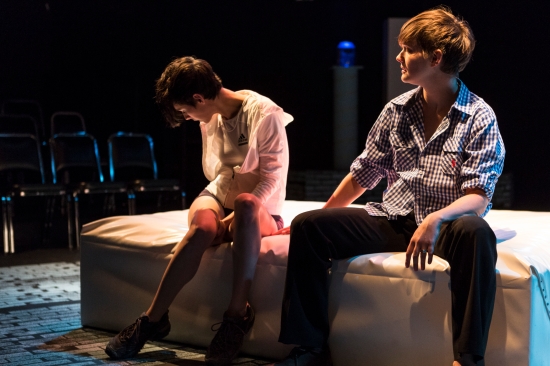