Rarely would a musical be my first choice of what to see at the theater, but there are exceptions, and My Fair Lady is first among them. PlayMakers Repertory Company has just opened its fresh version of this classic by Allan Jay Lerner and Frederick Lowe, slipping plenty of substance under the frothy surface.

Mia Pinero as Eliza Doolittle, and Jade Arnold as Freddy Eynsford-Hill in PlayMakers’ new production of MY FAIR LADY, in the Paul Green Theater through April 29, 2017.  Huth Photo.

Deriving from George Bernard Shaw’s Pygmalion (1913), which itself derives from Ovid’s tale of the sculptor Pygmalion and his creation with which he fell in love, My Fair Lady details the metamorphosis of Eliza, a very poor Cockney flower seller, into a lady who can be mistaken for a princess–a metamorphosis orchestrated by Professor Henry Higgins and undertaken on a bet with fellow language specialist Colonel Pickering. Higgins is so well-to-do that he cannot even comprehend the conditions of Eliza’s life or even that she has feelings–and he has no use for women, except as servants (of whom he has aplenty). Hell, he can’t even comprehend that he has feelings until Eliza changes him.

The musical keeps some of Shaw’s pointed political-social commentary about class stratification, labor and capital, but both the play and the musical fail woefully to come to grips with woman’s powerless position in the patriarchal world when she has neither money nor a room of her own. It’s Jane Austen all over again, a hundred (now 200) years later, but without the empathy: a “lower” class woman can make a living, even if by snatching at pennies; a “lady” without her own money can only marry. (For a more contemporary reworking of the basic story, see the 1990 film Pretty Woman.) No version satisfactorily answers the question of precisely how the creation–the lady–could love her “creator”–this is not an equal relationship, despite the woman’s spunk…but so romantic.

Just go with it. You can gnaw the bones later; for two hours and forty-five minutes, this production spoons up crème anglaise and meringues pavlova for your apolitical pleasure.

Mia Pinero as Eliza is suitably volatile, if occasionally over-petulant, and has an impressive voice, with a wide range–of octaves, of tone, of emotion, of volume. Except when she is foiled by the technical weakness of the headset, which turns certain timbres and pitches to mush, she’s a joy to hear. (I truly do not know why they use these headsets–the actors all can make themselves heard to the back rows without them.) Her rendition of “Wouldn’t It Be Loverly,” along with the ensemble, is particularly fine, and I say that as a person raised on the Julie Andrews version from the original Broadway cast album. Pinero imbues the song with such depth of longing for the simplest comforts that one may want to give away all one’s luxuries to the deserving poor.

Gary Milner, with the ensemble, tearing it up as Alfred P. Doolittle in PRC’s lively production of MY FAIR LADY. Huth Photo.

It’s a set-up, though, for Alfred P. Doolittle’s paean to the non-working life, “With a Little Bit of Luck” and his most excellent monologue on the undeserving poor. If director Rafaeli hadn’t kept strong control on the balance among the scenes, Gary Milner as Doolittle would have run away with the show. He is amazing, superbly physical, comically acute and utterly insouciant, especially in “Get Me to the Church on Time.” And again, part of his strength comes from the ensemble around him–the dozen actors who play all the smaller parts: dustmen, chimney sweeps, barkeep, servants, opera-goers, Ascot race-gazers, ball guests. Not only does the ensemble convincingly create all these individuals, not only can they sing–they can dance. Tracy Bersley has given them some marvelous choreography that goes beyond the standard musical theatre dance tropes, and involves a lot of very close synchronization to be effective. Outstanding among the ensemble are David Adamson, John Allore and Shanelle Nicole Leonard.

Longtime PlayMakers Jeffrey Blair Cornell as Henry Higgins and Ray Dooley as Colonel Pickering are superb. Cornell plays in the wide open space between Leslie Howard’s bloodless priggishness (in the 1938 film of Pygmalion) and Rex Harrison’s bombast (in everything, including the 1964 film of My Fair Lady), and gives us a Higgins with whom it is possible to empathize–because he makes Higgins’ own metamorphosis believable. Cornell has an attractive singing voice, and he’s deliciously wistful and confused in “I’ve Grown Accustomed to Her Face.” He and Dooley, colleagues these 22 years, work together as only time allows, and it is wonderful to watch. Dooley, who has an incredible range as an actor, is purely a treat as a the crotchety Colonel, a man’s man in a top hat.

He Did It! He Really Did It! Ray Dooley, right, as Colonel Pickering; Jeffrey Blair Cornell as Henry Higgins, and Mia Pinero as Eliza after the ball, in PRC’s MY FAIR LADY. Huth Photo.

The men are buttressed by women, naturally–and luckily for us, they are two of the funniest women working on Triangle stages. Their roles are small, but they get the most out of them, and charmingly, director Rafaeli has given them almost identical laugh moments that involve the stage’s pit/lift. Julie Fishell plays Mrs. Higgins, Henry’s mother, with a relish almost masked by her languid motions; Julia Gibson milks the housekeeper’s role of more than you knew was there. Together, the quartet of PRC company members makes one aware all over again of our extreme good fortune in having this resident theatre company in our midst. (This is Fishell’s final role as a PRC member. She’s leaving us soon, bound for California.) 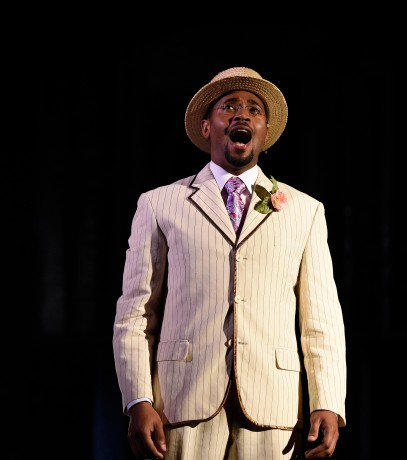 But wait, what about the feckless Freddy Eynsford-Hill, that foppish charmer and exemplar of undeserving wealth? Freddy, who has the most beautiful and romantic song in the show, “On the Street Where You Live,” is luminously portrayed by Durham actor Jade Arnold. I’ve seen Arnold do a number of surprising and thrilling turns on stage but I had no idea he could sing. He rightfully brought the house to cheers on opening night. It is a great personal pleasure to me to see PlayMakers turning a little more towards the local theatre community, as artistic director Vivienne Benesch concludes her first full season with the company.

All this talent is lusciously supported by the musicians–Mark Hartman and Alex Thompson on two yummy Yamaha pianos lent by Ruggero Piano Company–and by the design team. McKay Coble has created another effective and efficient set which is made richer by Masha Tsimring’s emotive lighting, and Andrea Hood’s costuming is really excellent, clearly setting the time period, enhancing characterizations, and looking swell.

Rafaeli has made the final scene ambiguous–is, or is not, Eliza returning to Henry, who has belatedly seen the light? This has always been a worrisome thing to me–the WHY of her return–but there’s no questioning the ways of love, however it may be torqued by power or lack of capital. Still, it is nice not to have it taken for granted. Altogether, this is a stand-out production: very sweet, but the calories are hardly empty.