Duke Performances presents a mind-boggling range of music, from soloists to huge ensembles, in many venues at Duke and in Durham, and regular theater-goers here have become accustomed to glorious experiences. But last night’s event was something extremely special. In conjunction with the Nasher Museum of Art, DP presented Persian classical music virtuoso Kayhan Kalhor, from Teheran, along with Ali Bahrami Fard of Shiraz, Iran, in the small auditorium at the Nasher. This setting gave the concert an intimacy that made the mesmerizing music even more overwhelming.

The Nasher’s current exhibition, Doris Duke’s Shangri La: Architecture, Landscape and Islamic Art, on view through Dec. 29, created this opportunity for two branches of Duke’s art tree to intertwine. Doris Duke’s former Hawaii home is now the Shangri La Center for Islamic Arts and Cultures, and Kalhor has appeared there in concert, and earlier this year, spent time as artist-in-residence there. Doris Duke amassed a very fine collection of Islamic artworks from many cultures; examples are on display, along with more recent artworks by other artists-in-residence at Shangri La, and large photo images of the rooms and grounds. It must have been strange for Kalhor to walk through a representation of rooms he has inhabited.

Classical Persian music depends on the musician mastering a large repertoire, in order to be able to embellish and improvise on it (Kalhor devotes a section of his website to a discussion of the music’s history and forms), no matter which instrument he plays. It includes much resonance, many repetitions with or without variations, and intensely moving melodic lines that flow out like calligraphic ink, or like the graceful arabesques painted into miniatures, woven into textiles or worked into bronze. With Kalhor playing, the music induces a meditative state leading, sometimes, to an ecstatic one: it takes the listener high and far, and the musicians even further. I experience a pleasing double awareness when listening–the awareness of my dancing mind within my body, and an awareness of great elemental imagery conjured by the sounds surging through time. As if from overhead somewhere out in the cosmos, I see vast landscapes of stone and dust, fields of grain and crickets, fast rivers, clear pools, trees, wind, fire, stars in the dark.

At the Nasher, Kalhor played not the kamancheh, the four-stringed spike fiddle with which the world has become familiar through Kalhor’s participation in Yo-Yo Ma’s Silk Road Ensemble, but a recent hybrid instrument devised by Peter Biffin in collaboration with Kalhor. With five strings and seven “sympathetic strings,” the Shah Kaman produces a deeper, richer sound, even more like human singing than the kamancheh. In the small room at the Nasher, one could see clearly how the musician makes the loosely-strung bow taut with his fingers, and how he turns the instrument, not the bow, to play upon different strings. Kalhor also made the Shah Kaman into a tonal percussion instrument by lightly beating on the conical neck while fingering the strings with his left hand. He punctuated these beats with sudden vibrant pluckings, before retrieving his bow.

Most of the time, Kahlor kept his eyes closed, going deep into the mystery, but now and then he glanced quickly at his partner on the bass santour, Ali Bahrami Fard, and they exchanged small blissful smiles. The santour is a struck zither, or as we say around here, a hammered dulcimer. The bass version Fard plays has 96 strings, and produces a powerful ringing into the deeper tones, making it a wonderful accompaniment to the Shah Kaman. Like Kahlor, Fard was completely in the music as it flowed through the minutes, speeding, slowing, swirling, resting, reviving to soar again. At times his mallets moved so rapidly that all one could see were liquid circles of motion.

This was the fourth time I have heard Kalhor live, and by far the most thrilling. I came to him backwards, as it were, from the huge Silk Road Ensemble, from his work with the Brooklyn Rider String Quartet (Silent City!) and with experimental cellist Maya Beiser. I had heard him in a small venue with two or three other musicians, but hearing him play with just one other master, each mentally attuned to the other…there was ecstasy on offer, more than enough for everyone in the room.

Kalhor and Fard collaborated on an album that provides a reasonable alternative to following them from concert to concert. I Will Not Stand Alone, released in 2012, is available on the World Village label.

As many times as I’ve listened to recordings of the Silk Road Ensemble, and those of several of its members–some of whom I’ve heard live–I was unprepared for the magnificence of the Ensemble’s live concert in Memorial Hall as Carolina Performing Arts’ year-long exploration of Stravinsky’s The Rite of Spring got underway. I attended the second of the two nights, on Oct. 1, so the two new works were receiving their second public performances. The best part of a great evening came after intermission, when a dozen musicians from 8 countries played Sacred Signs, a CPA-commissioned work by the Uzbeki composer Dmitri Yanov-Yanovsky, which draws on aural fragments from Stravinsky, takes inspiration from the writings of Nicholas Roerich, who designed the set and costumes for the original Ballet Russes production of The Rite in 1913.

The ten-section composition exceeds in beauty all works by Yanov-Yanovsky I’d heard previously. The structures are interesting, and it’s fun to pick out the Stravinsky phrases, but Sacred Signs goes far beyond the mechanical. Each section (charmingly, the sections are dedicated to various members of the Ensemble) has a distinct emotional quality and feels complete in itself, but together they comprise an emotional journey, starting with “In the Morning,” and ending “At the Last Gate.” A rich panoply of aural texture, color and volume, made possible by the Ensemble’s combination of instruments, arrays itself in these pieces. Some have percussionists running back and forth among their many playthings, while Sandeep Das at the center creates multiple brisk rolling rhythms on his tabla; others rely more on the honeyed flow of Yo-Yo Ma’a cello under the reverberant ringing strings of of Wu Man‘s pipa.

All the strings, all the mouth instruments and maximum percussive items go at once as Sacred Signs culminates in a glorious roar. After I could think again, I knew I’d been to a place of fundamental wisdom. Sublime is the correct word for this music.

Carolina Performing Arts has commissioned twelve works for this season. It’s staggering—this is arts patronage on a very significant scale. Not every piece will be a masterpiece for the ages, I’m sure. The CPA-commissioned video backdrop for Sacred Signs, by Hillary Leben for one, is a less-than-successful endeavor. A combination of overhead landscape photography and animation of Roerich’s drawings, with some vague shapes “dancing” now and then, the video is incredibly simplistic and jejeune, especially compared with the sophistication of the musical composition and its expression by the brilliant musicians. Even if the video had been great, I would not have wanted to divide my attention between it and the players. And in the case of Sacred Signs, the conductor. Ordinarily, the Ensemble works by listening carefully and playing together passionately, but for the complex, long, new work with its many shifts in tone and tempo, Alastair Willis conducted. Tall and very slim, he rises still taller at the crescendi, going up on his toes and stretching long arms high and wide. In quieter moments, he hunches a little, his shoulder blades pressing out sharply like little wings pushing out of his jacket. Watching these people make music is almost as good as hearing it.

The evening opened with a wonderful arrangement, by four members of the Ensemble, of John Zorn’s Suite from Book of Angels. The sounds wind and soar, wrapping one with a silken sense of colors in motion. This ravishing work was followed by Colin Jacobsen’s mystical Atashgah. Jacobsen was greatly influenced by his travels in Iran, and this piece has to do with elemental things: air, fire, the rising spirit. It features the incomparable Kayhan Kahlor on kamancheh, and the unworldly sound of the gaita (Galician bagpipes), played by Cristina Pato. These two pieces were a foretaste of the sweets to come after intermission.

But before that was a brand new, Silk Road-commissioned piece by Vijay Iyer, called Playlist for an Extreme Occasion, referring to the infamous opening night of The Rite of Spring, music and ballet. Here, too, you could hear occasional Stravinsky phrases surface, and the overall feeling was jumpy, aggressive. It was jarring at the time, because of the very different feeling of the jazz piano, and the contrast with the smoothness of the earlier pieces. However, in terms of the whole program, it made an excellent change, an unexpected break in the proceedings, that made one all the more receptive to the unfolding surprises of Sacred Signs.

The Silk Road Ensemble has a well-developed relationship with Carolina Performing Arts now, and will undoubtedly be back another year. But some of the Ensemble members will return much sooner, on Nov. 16, for what promises to be a fantastic concert by the super-quartet Brooklyn Rider, along with some of their friends. Colin Jacobsen, Jonathan Gandelsman, and Nicholas Cords will be joined by fellow Rider Eric Jacobsen, and Gabriel Kahane and Shara Worden. The program will include Stravinsky, Bartok and lots of new work, including more Carolina Performing Arts commissions, one a new piece by Colin Jacobsen. 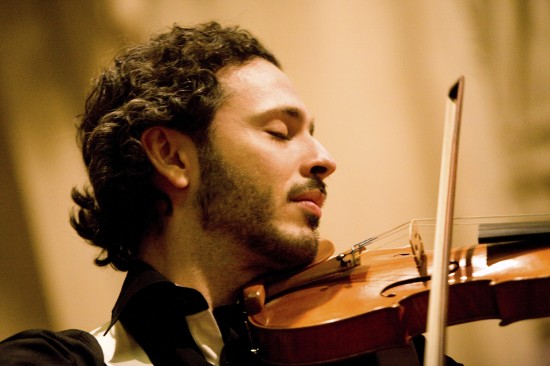