It’s a daunting task to review a production as nearly perfect as the current ArtsCenter Stage presentation of August Wilson’s Gem of the Ocean. The play, although not the first written (it premiered in 2003) in Wilson’s magnificent 10-play Pittsburgh Cycle, begins the stories that cover African-American life in Pittsburgh’s Hill District through the 10 decades of the 20th century. Several of its characters, including the ancient Aunt Ester, were born in slavery, and the main concern of the play is freedom — what it is and is not; how to get it, how to keep it; and how to “live and die in truth.” As a piece of writing, it is beautiful almost beyond describing: robust, musical, rich in color and shading. Its cadences and repetitions build like those of the best jazz, spiraling around a motif with the hard glitter of change and the lush continuity of remembrance. 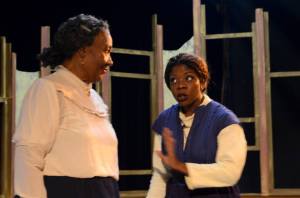 Juanda LaJoyce Holley as Aunt Ester, who can conjure the spirit world, and Sherida McMullan as Black Mary in The ArtsCenter Stage production of Gem of the Ocean. Photo: Adam Graetz.

It’s a big play in every sense. Two full acts barely contain its life. Wilson (who received many awards for various parts of the full cycle, including two Pulitzers) is so successful at working with big ideas and concerns because they are the natural concerns of his large-scaled and magnificently detailed characters, who live in a world where metaphor and reality are not strangers, and where now includes all of the past. Their landscape is strewn with boulders; they are set about with ambushes, and rivers of blood. It’s a world in which a conjure woman can wash souls and cast out scoundrels from her house of peace and sanctuary at 1839 Wylie Avenue, Pittsburgh, PA. It’s 1904 — 110 years ago by the calendar, but not too distant from 2014.

The ArtsCenter production is directed by John Rogers Harris. His timing of the dialogue and action is faultless, but more importantly, he lets love and tragedy fill the room at their own pace. Harris has cast a powerful ensemble of actors as the seven characters, and Wilson’s words pour forth as if from their own minds. No one spouts speeches, or declaims, or breaks the fourth wall. We observe and empathize looking into a world of which we are not part. It is complete in itself.

Romare Bearden was one of August Wilson’s influences. Here is Bearden’s 1964 Conjur Woman as reproduced on a USPS stamp.

“In a 1999 interview in The Paris Review, Mr. Wilson cited his major influences as being the “four B’s”: the blues was the “primary” influence, followed by Jorge Luis Borges, the playwright Amiri Baraka and the painter Romare Bearden. He analyzed the elements each contributed to his art: “From Borges, those wonderful gaucho stories from which I learned that you can be specific as to a time and place and culture and still have the work resonate with the universal themes of love, honor, duty, betrayal, etc. From Amiri Baraka, I learned that all art is political, although I don’t write political plays. From Romare Bearden I learned that the fullness and richness of everyday life can be rendered without compromise or sentimentality.” He added two more B’s, both African-American writers, to the list: the playwright Ed Bullins and James Baldwin.”