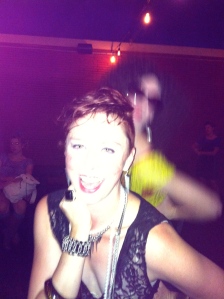 You never know what you will get, with the Little Green Pig Theatrical Concern. But you do know it will not be average, mediocre, or even normal. There is no middle ground with these folks, who go flat out for broke with every production. It’ll be heaven, or it will be really bad. If you know the company’s work, you tend not to care when something comes out stinky—it is just the price of the work that works.

Dana Marks as Richie, and Jane Holding as her aunt, Mary-Gaunt Bolingbroke, as twilight falls on LGP’s roving RICHIE.

It is working this time.

LGP’s current production shakes loose from nearly all conventions. It’s Shakespeare—modified, adulterated, transgendered and ripped out of the frame—but still, recognizably Shakespeare. LGP’s artistic director Jay O’Berski, along with fellow travelers such as Tom Marriott and Jeffrey Detwiler, both of whom are involved here, have long demonstrated great sensitivity to the plays of Shakespeare, and huge skills at upending expectations of them while guarding their core of meaning and language. With RICHIE they’ve gone where no man has gone before.

Richard II is a dark play, difficult and mean. With an all-female cast and a contemporary conceit, Richie is just as dark, hard and mean.

Wait, an all-female cast? Oh yes, and that changes a lot of things. When all those fathers and sons and uncles and nephews and boy cousins become mothers and daughters and aunts and nieces and girls cousins, you have got some different chemistry to contend with. The end result of the power plays remains the same, but you get there by a different route. Not content with merely rewriting Shakespeare and giving all the power to the women, and certainly not content with merely “breaking the fourth wall” of the theater, LGP has ditched the theater all together, and gone a-roving, marshalled by director Jay O’Berski in one of his more brilliant endeavors.

Dana Marks leads the cast as Richie, high-living, bling-dripping, Euro-trash queen of her entourage. Her huge performance tells us all we need to know about charismatic personal power. Like her entourage (the present day substitute for the royal Court), we unquestioningly follow her from pub to club: from the fashionable haunts and seedy purlieux of Riggsbee Avenue, past the gloomy facade of shuttered, hulking Liberty warehouse, up and down the slick dales of DurhamCentral Park—to Richard’s bitter end, known and expected, but nonetheless shocking when it comes to Richie. The final scene imprints your mind, an unforgettable projection in the dark, outside the guardhouse.

Marks’ performance is magnificent. Seeing her stride through street and crowd in her black lace doublet (very Prada—see September Vogue—but probably by costumer Kala Wolfe, or one of the four other contributing local fashion designers), I realized I’d never seen Marks on a big stage. She could command the DPAC! and her vocal skills are such that she could be heard in the balcony. As it was, she made herself heard over pub roar, traffic growl, and Gram Parsons covers at Motorco, with her most delicate soliloquy occurring outside Geer Street Garden, with people coming and going through her scene. 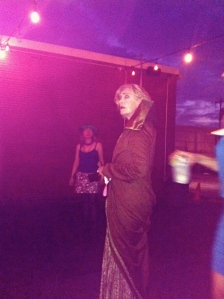 Not all the cast has equally strong vocal capabilities, but certainly the two that need it most, do. The marvelous Jane Holding plays Mary-Gaunt Bolingbroke to a T. I wanted to put her on re-wind, just to listen to her speeches again. She’s Richie’s aged aunt, and in their first scene together we begin to sense just how the feminization of the play torques it. Mary-Gaunt is also the mother of Hayley (not Henry), who will by wiles wrest the royal star from her cousin. Tamara Kissane

(so good to see her in action with such a dynamic role) sizzles like dry ice, and you can be sure butter would not melt in her mouth. You can actually hear her throughout, but you wouldn’t have to: Her physical presence and styled behaviors, so cool and clean, mark her as the new star each time we see her in Richie’s fevered presence. 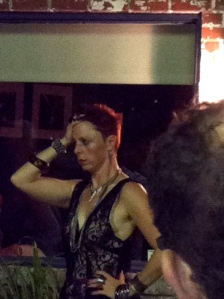 I have wasted time, and now time doth waste me.

Mention cannot be made of every cast member, even though they all have their special moments. Notable, however, are Kana Hatakeyama and Alyssa Crash Wong as “Momo” Northumberland and her daughter, “Hotstuff.” You know Northumberland—the Duke, with his sons dukes after him for generations, who keeps a finger to the winds of change, always ensuring a fair breeze blows on him. He’s the very model of a modern party-switcher, and in any alliance he makes between power and loyalty, he will always retain power and ditch the loyalty. Momo and Hotstuff perform that baronial function well. One wishes only that we could go on for the next few plays and see Hotstuff  (Henry Hotspur Percival) mature into her coming set-to with Hayley’s (Henry) line.

Thinking back on the numerous fascinating productions of Shakespeare by The Somnambulist Project/Shakespeare & Originals/Little Green Pig, I’m awed to realize once again that we live in a place (…this blessed plot, this earth, this realm, this DURHAM…) where Shakespeare lives on, thanks in great part to the aforenamed purveyors of the word. I’m personally addicted to the plays of Shakespeare, and will go at any opportunity. Whether or not you are so addicted, do not miss this up-to-the-minute remake of one of the great, tough, ones. RICHIE points its flashlights in the dark, like swords, stabbing at the corruption, cruelty, and conniving that remain always in fashion, whomever may be leading the entourage. 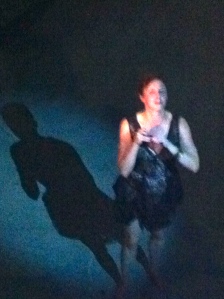 Let us talk of graves. In the skateboard pit in Durham Central Park.

RICHIE continues on the streets of Durham Thursdays-Sundays at 7:30, through Sept. 22. For information, http://www.littlegreenpig.com. Email tickets@littlegreenpig, or call 919-452-2304. Please be assured that even in the gloaming, the show looks better than my cell phone pictures!