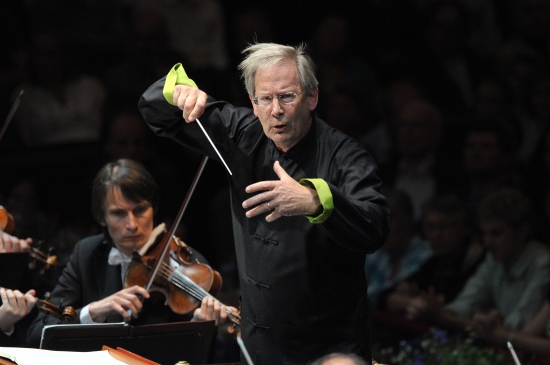 “I should like to go,” she said. “I have never heard a symphony, not with an orchestra. I have read about the Ninth. They say it is divine.”

So says the character Emily Bronte, in Denise Giardina’s wonderful novel of the Bronte sisters, Emily’s Ghost. It is the opening move in her losing struggle to get permission to walk 12 West Yorkshire miles there and back to hear the music, to be performed by a touring orchestra with a local chorale. She has taught herself to play the piano transcription of the 5th Symphony (much like she learned German from a book, without ever having heard it spoken); she longs for this music with all her passionate soul. She’s ready to take in mending to pay for a ticket. The problem is, she’s an unmarried female in the 1840s, with no money for carriage, chaperone or suitable accommodation.

“But I desire nothing in the world so much. Oh, Papa! Only to hear Beethoven’s symphony, the greatest, everyone says–“

Last night, without any kind of struggle, I drove the easy 12 miles and back to hear the Carolina Performing Arts presentation of that glorious, familiar, music, and thought again and again of that passage. The marvel of recorded and broadcast sound has given us so much music that we tend to be blasé about the miracle of it. And although it is much easier for anyone to hear a live performance of Beethoven’s 9th than it was for a poor rector’s daughter in the West Riding 170 years ago, it is still costly, a very special thing, truly available only to a small elite group with a certain kind of erudition, and a fistful of spare cash, or in this case, a student ID. That this music is aesthetically accessible (pardon the dreadful word) to anyone, anytime, anywhere, only makes that sadder. The Beethoven 9th does not require that you know anything; it does not require you to struggle with opacities and ambiguities, structural oddities or ugly sounds. All that it requires (not such a small thing) is for you to open to it, to flow with it and to feel what you feel. The warm full sound of the Orchestre Révolutionnaire et Romantique (ORR), with its period instruments, along with the astonishing Monteverdi Choir, conducted by the passionate and athletic Sir John Eliot Gardiner (in black velvet Mandarin jacket, the cuffs turned back to chartreuse silk), made it very easy to turn off the mind and feel the joy.

Mostly live performances go off without any untoward incidents, but you never know–that’s part of why they are so exciting. This one had a little surprise. It came near the end of the second movement, with the musicians and conductor completely engrossed in making their vivid magic, and the audience like one big ear. A terrible noise buzzed from the speakers (not in use for the concert). Some hapless sound tech must have flipped a wrong switch. Gardiner’s both feet came off the floor. His head whipped around; the baton faltered for an instant. His glare landed on the first violin, who shrugged. Turning back to the ensemble, he visibly controlled himself and they brought the movement to a creditable close before he threw down the baton and stomped off the stage. He was gone for a long time, presumably skinning the malefactor. Returning to the podium and recovering the baton, the conductor crouched like a pole vaulter, and catapulted back into Beethoven.

Memorial Hall was packed to the top row for the concert. The audience was not entirely white, but its greater diversity was in age. Behind me were two young girls in velvet dresses, with their parents. Across the aisle, sat another family of several children, the youngest of whom could not have been more than six. There were more than a few nonagenarians, and every age between. Most of these people would have heard the 9th via recording, and many would have been to a live performance or five, but I’m willing to bet that up in the nosebleed seats, there was at least one person on a $10 student ticket, maybe a preacher’s kid from some rural crossroads, who experienced this divinity for the very first time last night. When the music ended, the entire crowd surged upward with a prolonged joyous roar nearly as loud as the combined 64 instruments and 39 voices of the orchestra and choir. Turning to look back and upwards, I saw every face transformed. A little speaker buzz had only served to limn the edge of ineffable beauty.