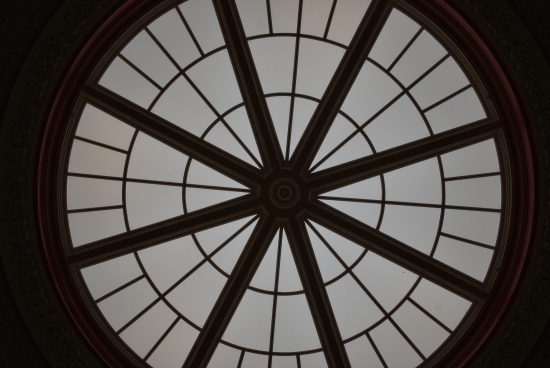 Almost ready to roll. Looking up into the dome of Baldwin Auditorium.

“People Get Ready” opens the great Curtis Mayfield song released in 1965, but I always hear it in my mind as sung by North Carolina bluesman Sonny Terry with fellow Piedmont bluesman Brownie McGhee. For years I thought it said “there’s a change a-comin’.” Well, in Durham, there generally is a train comin’ down the tracks, but recently it’s a train of change that has jumped the rails and is running uptown, downtown and all over Duke. “You don’t need no baggage, you just get on board.” For one of the big, grand changes, you will, however, need a ticket–or, preferably, season tickets–because if you love music, you will want to visit a venue you’ve been shunning. 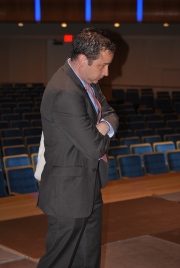 Baldwin Auditorium, which so gracefully closes the north end of the long quad of Duke’s East Campus, was built in 1927, and ever since, it has been a pretty terrible place to hear music. Even after a renovation in the mid-1980s, the sound quality was poor, and the room uncomfortable. As Scott Lindroth, Professor of Music and Vice-Provost for the Arts noted, drily, “What we’ve not had at Duke is a world-class performance venue.” Those days are OVER. A $15 million train run by acoustical engineers, passionate architects, demanding musicians and an outstanding impresario has passed through Baldwin and rendered all beautiful. This morning, Duke faculty and staff opened the almost-ready hall for a media tour, and they had every right to their proud and happy faces. Baldwin, which connects to Duke’s music building, will be the music department‘s performance home, and the venue for Duke Performances‘ classical music offerings. The Ciompi Quartet will perform Sept. 21, and an amazing variety of classical, jazz and vocal music will follow, with an exciting program featuring the great Dianne Reeves coming up on Oct. 4.

In case the naturally skeptical reporters doubted the acoustic quality of the room, Eric Pritchard, Professor of the Practice of Music and first violin in the Ciompi Quartet, was on hand with his violin to demonstrate. Even before the acoustical fine-tuning that will occur over the next few weeks, the music was astonishing. Sitting 5th row center, under the dome, I felt like I was inside the violin. I can still feel the music quivering on my skin. With all the changes that have been made, the hall is wonderfully resonant, and completely lacking in the echo bouncing off the balcony that had previously muddied all music. The vibrancy of the room makes you realize that Reynolds, for all its attributes, is a little muffled, and that it is not just the chairs in Nelson Music Room that are a little hard. The new Baldwin is also a visual treat. The warm-toned wood covering many of the theater’s surfaces is figured anigre, an African wood, cut from a single large tree (even without this knowledge, you feel the ineffable harmony of wholeness). The 1/16th inch veneers were bent and applied to the  vacuum-pressed plywood substrates built up in layers to as much as an inch thick by Apex-based Woodpecker Industries. The wow factor is very high in the lovely complex curves, which swoop above and around the 685 seats with their pale beech arms and (surprise!) Duke blue upholstery.

Ray Walker, a staff architect at Duke for 39 years, who coordinated the Baldwin make-over, explained some of the mysteries of acoustics as he led the walk-through. Because the auditorium was square, which is bad for sound, they built a box within its box, creating side lobbies around a rectangular hall. They broke up wall surfaces to increase resonance. They installed all sorts of shades and curtains that can be pulled to soften sound when needed. They engineered all those wonderful curves so sound could flow. They corralled the HVAC equipment in an underground vault outside so there will be no vibration or hum. Working with Jaffe Holden acoustical consultants, and Pheiffer Partners Architects, Duke seems to have thought of nearly everything.

The only thing missing from the new Baldwin is a coat check room. Sigh.

Here are a few details of the interior. 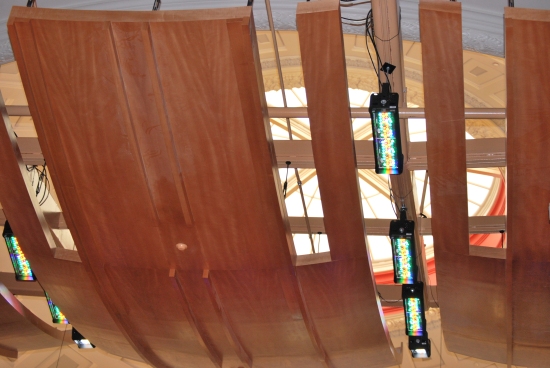 Looking from the stage, through the sound baffles to the dome. 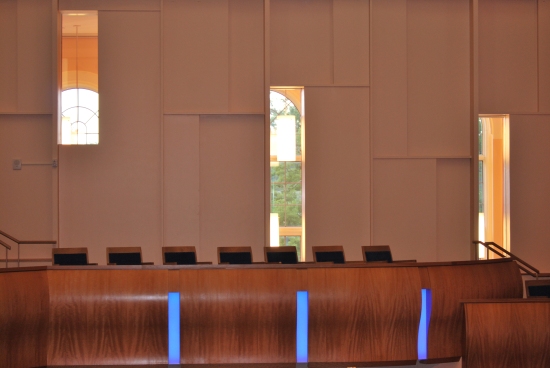 A side balcony, with view through the new wall and out an original window.

Even the oculus underwent acoustical alterations. 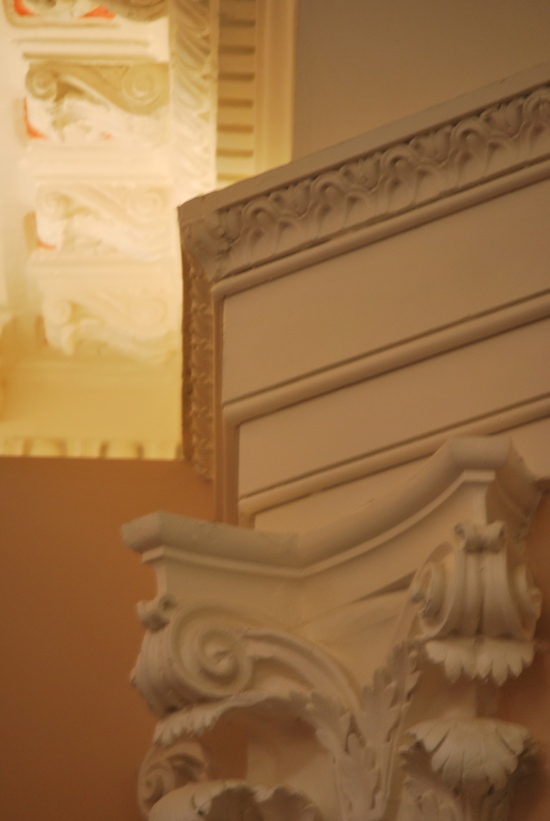 All the rich detailing was carefully preserved.

An original Corinthian capital on a pilaster. 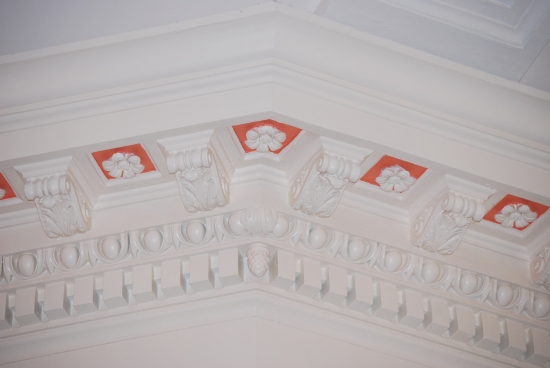 Sometimes classical is just the best. 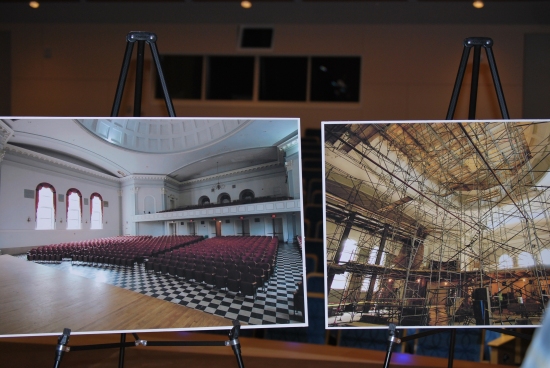 Wouldn’t believe it if there weren’t ‘before’ photos.