Derrick Ivey and Lakeisha Coffey in THE BEST OF ENEMIES at MDT. Photo: Alan Dehmer.

From my review in CVNC:

2013 has already been an extraordinary year in theatre for the Triangle, but one of the most powerful productions of the year has come near the end. Through December 21, Manbites Dog Theater is presenting The Best of Enemies, by Mark St. Germain, who based his excellent play on Osha Gray Davidson’s book of the same title, which laid out the amazing story of the confrontation and eventual friendship between Ann Atwater, a black civil rights activist, and C.P. Ellis, a white Ku Klux Klansman, during Durham’s struggles with school desegregation in the early 1970s. An American story of truth and reconciliation, it is beautifully directed by Joseph Megel, who has previously demonstrated unusual skill at dramatizing the humanity behind the ideas of race and class struggle.

See this show if you can. It ranks very high among the many great accomplishments of Durham’s finest, feistiest theatre. Manbites Dog reports that tickets are going very fast. They have added two shows, but don’t wait to order tickets. 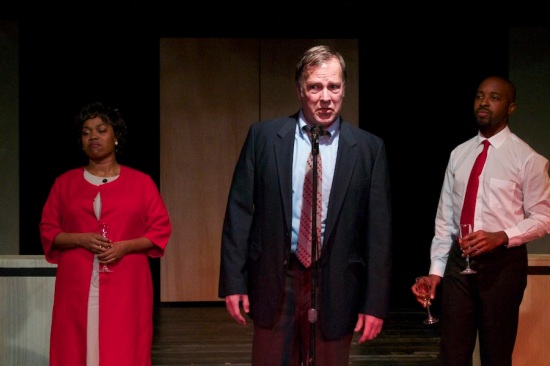 At the moment of transformative change: Coffey, Ivey and Edwards, directed by Joseph Megel in Manbites Dog’s THE BEST OF ENEMIES. Photo: Alan Dehmer.