More theater than we can attend! It is what we’ve all wished for…and now we have it, so get out and see it. Here’s a snip of my review of THE CRIPPLE OF INISHMAAN, currently playing at Deep Dish Theater in Chapel Hill. Directed by Tom Marriott, it has the comic timing and gentle appreciation of human longing and human foible that we’ve come to expect from him in his busy decades of theater work in the Triangle. This is his first time directing at Deep Dish; surely there will be more. Show runs through May 18, and has been selling out. Tickets on the website. 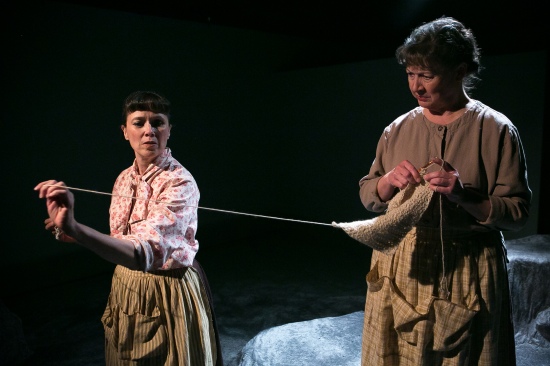 Irish playwright Martin McDonagh has a sharp tongue and a kind heart, and both characteristics inform his play The Cripple of Inishmaan. Set in 1934, on one of the cluster of islands off western Ireland at the mouth of Galway Bay, the play examines various kinds of acting and authenticity. It looks at secrets and stories, news and gossip, and where they intersect. It considers choice, fate, and what makes a community or a family. All this is reeled out in cunningly crafted conversations among the idiosyncratic characters of the rocky, sea-bound village.

Read the rest on CVNC here.

Samantha Rahn and Ishai Buchbinder in THE CRIPPLE OF INISHMAAN. Photo: Jonathan Young. 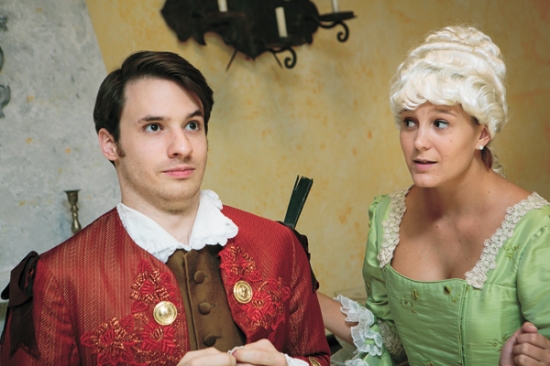 Brian Fisher and Amelia Sciandra in “She Stoops to Conquer.” Photo by Jonathan Young.

This article first appeared in print in the Indy Week, 10/31/12, with the headline “Dirty old classics.”

One of the many great things about the Triangle theater scene’s width and depth is the range of plays it is now possible to see without going very far. We can contemplate new plays with the e-ink still wet, those only recently set loose on the world, familiar pieces from our lifetimes and great works from the last couple of millennia. This past weekend saw the openings of two classics—one from 1773, one a new version of a 1673 work. The 18th-century piece, Oliver Goldsmith’s She Stoops to Conquer, is playing, for added piquancy, at Deep Dish‘s very 20th-century space in University Mall.

Goldsmith was quite a character himself. Born in Ireland, son of an Anglican minister, he was not a brilliant scholar, yet lived by his wits. An acute observer of people, he became a prolific writer in several forms and achieved success in London, where he was admired by so important an arbiter as Dr. Johnson. He made money, but between generosity and profligacy, he left the world as least as poor as he entered it. But a year before he died, She Stoops to Conquer premiered in London to great acclaim.

Thanks to Goldsmith’s observant eye for timeless human foible and his kind-hearted appreciation for the ridiculous, She Stoops to Conquerremains a very amusing play about love and how to get it. Jane Austen fans will immediately appreciate the dryly comic tone (Austen read Goldsmith; the “fine eyes” in her early novel Pride and Prejudice may be a borrowing from this play).

Tony Lea directs for Deep Dish with fairly broad strokes but refrains from burlesque. Led by Marcia Edmundson as Mrs. Hardcastle, the cast quickly moved from nervous to sparkling and ready to frolic on opening night, although scene changes were a bit clunky. A charming aspect of the play is its many asides, and all the players seem to relish these, rolling their eyes and speaking directly to the audience, which is barely off the stage in Deep Dish’s tiny space. Front row, be warned: You will be drawn into the action.

The producers opted for period costume, which is carried off well with David Serxner’s designs. Kate Hardcastle—she who stoops—has lovely gowns for both her daughter-of-the-house role and her barmaid disguise, and Amelia Sciandra wears them well, sashaying in her wide skirts without knocking over the furniture in Kenneth Rowland’s functional if slightly underdressed set. It is great fun to see her outwitting the silly young gentleman who avoids his equals while fawning on lower-class women. That gentleman, Marlow, is dashingly dressed and played by Brian Fisher; he rather overshadows his sidekick, Brett Bolton as Hastings, who is there conducting his own romantic maneuvers with Rebecca Vaisey’s coy Constance. Jeffrey Vizcaino plays the key provocateur, young Tony Lumpkin, with considerable energy; as the evening went on, he gained confidence and rose to the levity of his part. The show is long, but it hews always to the mandate to “leave them laughing.”

The production continues through Nov. 17.