The program for COCK, British author Mike Bartlett’s 2009 play that ends its run at Manbites Dog Theater Oct. 19, includes a verse from a song by the late great Willie Dixon that gets right to the heart of the matter: “Now if you see my lil red rooster, somebody please drive him home…ain’t been no peace in the barnyard since my lil red rooster been gone.” The lil red rooster in COCK is a pusillanimous young man named John, believably acted by Phil Watson, who wanders away from his longtime boyfriend, M, and wanders back again, ruffling up his cockade and testing his spurs on M, who submits–again and again. Gregor McElvogue as M gives a performance that repeatedly surprises, through an emotional range several octaves wider than his roles generally allow. Seeing McElvogue tender and needy and begging is quite something. 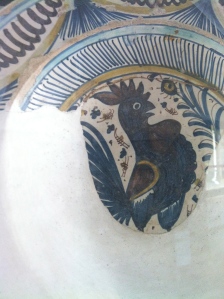 The twist here is that John takes up with a woman, W, played with considerable verve by Emma D. Miller. She’s closer to his age; she’s shorter than he; she’s sweet and gorgeous and uncomplicated and kind. And she thinks she’s done got her a fine rooster for her own yard. All she needs to do is go back and close the gate real tight over at M’s place, and her lil red rooster will come on home with her.

But she has a lot to learn about the nature of the beast.

And about what may happen when two roosters get into a cockfight, especially when one calls in his old daddy to help (John Honeycutt, a pleasure to watch, as usual).

Director Jeff Storer sets the fast-moving talk-action in the round, on an adversarial red circle. There is no furniture, nary a prop, no sound or music–just a bell marking the end of each round of the struggle and the beginning of the next. It’s an effective set-up, keeping you off-balance through the emotional surges. Its extreme stylization keeps you focused on the ideas and problems central to the play, which is good, as the people are not all that likable.

You end up feeling considerable sympathy for all of them, however. They each have already struggled with their own situations and identities, and now, when they thought the hard stuff was figured out, here’s another baffling mess of love and longing. And power games.

Perhaps the most interesting aspect of this play is the glimpse it provides of what may be the next battleground in the struggle to understand (and control) evolving human sexuality. John, the lil red rooster, is forced by girlfriend, boyfriend and father to make an either/or choice. He must choose W or choose M, there is no other way. But he wants to make a both-of-the-above choice. He finally does choose one, but it diminishes him cruelly. Winner takes all, but all is merely a trophy, not love.

Can you imagine how the feathers will fly when the roosters tell the legislatures that justice requires acceptance of bi-sexual polyamory? No justice, no peace in the barnyard, whether or not the lil red rooster stays home. 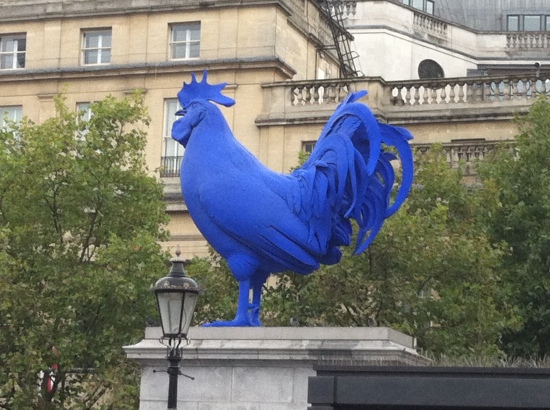 “Hahn/Cock” by German artist Katharina Fritsch currently lords it over the public in London, on Trafalgar Square’s Fourth Plinth. Its blue coloration is meant to convey peace.