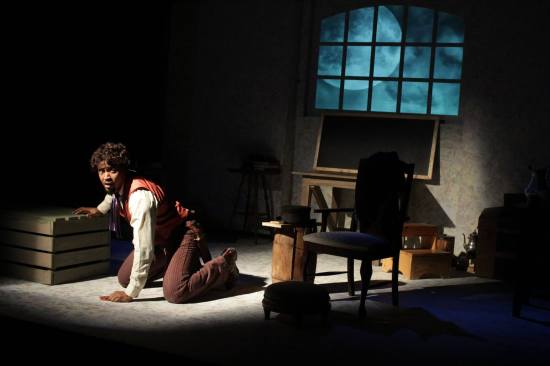 Jade Arnold as Abraham Galloway, in Howard L. Craft’s The Fire of Freedom at the REDBIRD new play festival. Photo courtesy the ArtsCenter.

From my review published on http://www.cvnc.org with the title “Redbird’s Second Program Features Hot New Play By Howard Craft”

Part Two of the Carrboro ArtsCenter’s thrilling REDBIRD Festival of New One-Act Plays by North Carolina Playwrights had its first performance the evening of March 14, with the remaining two out of the five plays presented. The glory of the program came in the second play, a very new work by Howard L. Craft. Inspired by wonderful historian David S. Cecelski’s book, The Fire of Freedom: Abraham Galloway and the Slaves Civil War (UNC Press), Craft’s one-actor play proves (again) that a monologue, in the right hands, can be supremely dramatic….

Jade Arnold is an extremely charismatic actor, with powerful vocal skills, explosive physicality and breathtaking timing, making his embodiment of Galloway as compelling as Craft’s words. In a hidden attic, in New Bern, in 1863, Galloway has come to speak from his own observations and experiences to a crowd of black men about whether to take up with the Union Army; about what and who can be trusted and why, distinguishing incisively between the cause of the Union and the cause of Freedom. A representative from President Lincoln is to follow him, and Galloway is making sure the men understand that they are in a position to bargain and require, before committing themselves to the army. “I am not asking you to trust his words, but there are things that you can and must trust. Trust in a thing to be true to its nature. The nature of a bullfrog is to leap. The nature of an Army is to kill. The slave will not be free without much killing.” 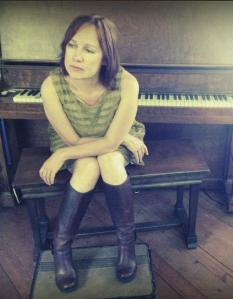 She’ll grab you by the heartstrings and sing you back home. Iris Dement, appearing at the ArtsCenter May 2.

One of my all-time favorite songbirds will be singing tonight from the small stage at the Carrboro ArtsCenter: the wonderful Iris DeMent.  What a songwriter! What a storyteller! What a compelling voice! When DeMent’s first album, Infamous Angel, appeared in 1992, I could hardly play anything else for months. She makes me feel home. Not necessarily comfortable or happy (“Easy’s Gettin’ Harder Ev’ry Day”), but home. Other great records of wise poetry and fine playing joined it–but until last fall, it had been sixteen years since a new Iris album came out. It’s called Sing the Delta. Hallelujah, y’all. When she came to the Cat’s Cradle years ago, I saw practically everyone I knew there, pressing close to the stage. It will be nearly as intimate in the ArtsCenter, with the advantage of actual seats. Show’s at 8. See you there. 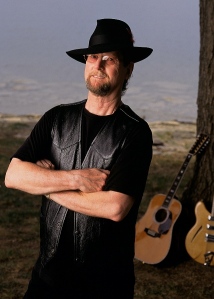 Thursday is just the beginning. The ArtsCenter, now led by the highly music-knowledgeable Art Menius, has announced a really incredible roster of concerts–many kinds of American music–for the forthcoming year. Friday, May 3 brings another legend–Roger McGuinn. This is the man whose sparkling 12-string and musical verve lit up the 1960s and beyond. He was one of the founders of the Byrds.  Need I say more? Maybe just three words: “Mr. Tambourine Man.” McGuinn has not slowed down, but he has turned back towards his folk roots. If you were, perhaps, born too late to know him from the first wave, check out his recordings of numerous songs here  (listen for free). Should be a great concert.

But wait, there’s more–it’s a one-two-three punch. Not the Byrds, but The Stray Birds, a charming singer-songwriter trio from southern Pennsylvania, will play the ArtsCenter on Saturday, May 4. The musicians of this young band were steeped in music from infancy–Appalachian mountain music, classical, and (for them) classic Americana. Lead singer (guitar, fiddle, banjo) Maya De Vitry grew up singing along with Iris DeMent in the family car, and you can hear it in her words, and the spaciousness she gives them. De Vitry’s voice is smoother, more golden, than DeMent’s, but no less honest. Band mate Oliver Craven (guitar, fiddle) wrote half the songs on their fine, self-produced CD, and he and Charles Muench (bass, banjo) create beautiful harmonies with De Vitry. NPR named their album one of the best of 2012, and I totally agree. Smart songs, lovely sounds, great energy. Really great energy: “I like surprising people with music,” De Vitry told me in a phone interview. Explains why the now 22-year-old was successful busking her way around North America and Europe. Prepare to be happily surprised on Saturday night. 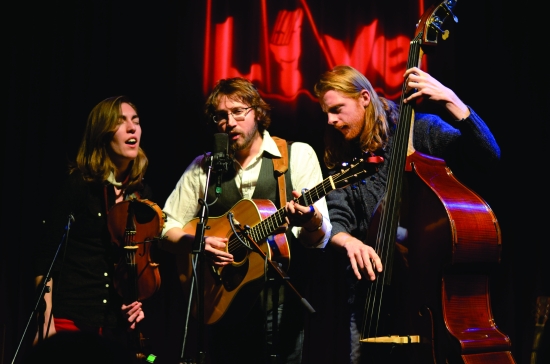 American troubadours, The Stray Birds, will play May 4 in the Paris of the Piedmont.

However, if you just can’t take your nouvelle old-time music sitting down, choose option B. 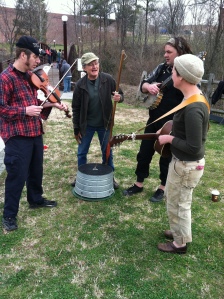 Local favorites, The Five Points Rounders will be playing one of their Rowdy Square Dances, this time at  Nightlight Bar & Club near the Chapel Hill/Carrboro line. Warning: this is not your mama’s square dancing. Too much fun, and you can buy beer.

I’ll be missing Roger McGuinn on Friday, because I will not miss the opening of the final show in Manbites Dog Theater‘s great 25th season. Ed Hunt and Jeff Storer changed the theatrical landscape in Durham and the Triangle when they created their theater, and here’s a play to demonstrate how far we’ve all come. At the beginning, MDT did a lot of “issue” plays about gay identity, AIDS, discrimination and so on–all good–but now they can make plays about people, not symbols. 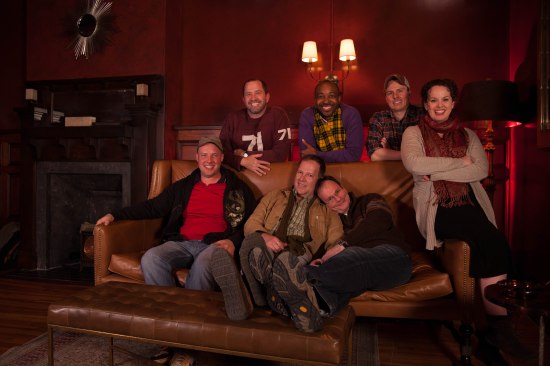 The super-cast (including Gregor McElvogue cuddling with the ever-impressive Derrick Ivey) of THE HOMOSEXUALS, lounging at the Durham bar, Whiskey. Photo: Paul Davis.

As Jeff Storer says: “In the early days we did queer theater because our friends were dying and it was a way to tell the stories and raise awareness about our responsibilities as a society. A play like THE HOMOSEXUALS is political by virtue of its title. But it is not an issue play. It’s about FAMILY. About finding a family and a home when the one you were born into disapproves. The play is sexy and playful and It’s about change and loving friends. It’s about the “here and now.””

Storer, a master at coaxing maximun humanity from actor ensembles, directs this recent play by Philip Dawkins. He’s got a dream cast of several of this area’s finest actors. The show will run through May 18. Tickets on the website. Don’t let this one slip by.

Also in Durham, and just a block away, something entirely different. Little Green Pig Theatrical Concern presents The Wooster Group’s Diary of Anne Frank at The Shadowbox. This experimental production of an experimental work that never happened, in a new experimental performance space, is directed by Jay O’Berski. It could be a steaming mess; it could be brilliant. Probably both. Guaranteed that LGP will take you for a wild ride. Opened May 1, runs through May 18. Tickets: tickets@littlegreenpig.com  or 919.452.9204. 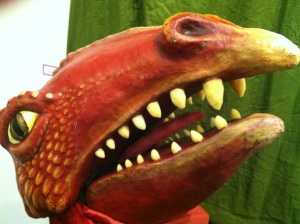 Eye of Lobster, by Paperhand Puppet Intervention, on exhibit at the Carrboro ArtsCenter, 7-6-12

For the 11th year running, the Carrboro ArtsCenter is presenting one of its most remarkable undertakings, the 10 By 10 in the Triangle action-packed extravaganza of ten recent plays, each ten minutes long, brought to life by ten directors and ten actors (who also move the furniture). Attending this ridiculously refreshing event is a lot like opening your throat and pouring down a cold Coca-Cola—a great thing to do in July.

Playwrights from around the country, and now the world, submit works to the competition, which is juried by committee. Once the list is semi-finalized, Jeri Lynn Schulke, artistic director of the ArtsCenter Stage, chooses the ten directors, and among them, they reduce the list to ten plays. Schulke then assembles a cast of ten versatile actors who can create all the parts in all ten plays—and the creative madness begins, with the help of some of the Triangle theater’s dedicated 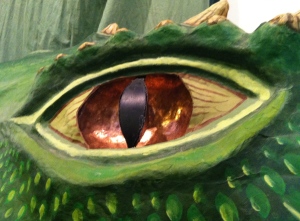 Eye of Dragon, by Paperhand Puppet Intervention, on exhibit in the Carrboro ArtsCenter, 7-6-12

backstage production artists. Each director gets five rehearsals, then there’s the tech rehearsal and one complete run-through before opening night on the ArtsCenter’s tiny stage. There are no sets, and props are minimal. Costumes, however, can get more elaborate.

For instance, the food items in It’s What’s for Dinner, by Jonathan Graham, which opens the evening. Deftly directed by Sylvia Mallory, the play features kale, brie, beef, and leftover macaroni and cheese, enacted by Geraud Staton, Mary Rowland, Page Purgar and Fred Corlett. This hilarious send-up of the food foibles of well-to-do and politically correct locavores hits the bullseye around here. And you ain’t seen nothing til you’ve seen Geraud Staton as a bunch of kale—Tuscan black kale, one presumes. 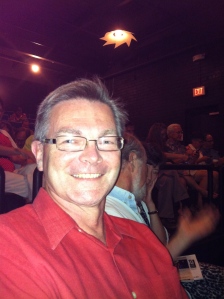 Eye of the Director: Michael O’Foghludha led A SHORT HISTORY OF WEATHER in the 11th annual 10 By 10 in the Triangle, at the ArtsCenter through July 22, 2012.

Part of the fun of 10 By 10 is seeing the actors appear in such different roles in quick succession. Staton is well-paired with another large man, David Berberian, in the sharply drawn After You, by Libba Beaucham, directed by Jerry Sipp. Alone, either one of these actors can make the room look small; together, in three-piece suits, watch chains and hats, they make the room disappear.

Berberian is particularly effective, along with Leanne Heintz, in Jonathan Yukich’s A Short History of Weather. As directed by Michael O’Foghludha, Weather starts off fast and funny, but settles gently into a slow and tender conclusion. Heintz (recently seen at Deep Dish in Henceforward…) packs a lot of nuance into the ten minutes of this surprisingly endearing play.

Each of the plays is worthy of comment, but it would be so much more efficient to see them for yourself. Be sure to stay until the end. You don’t want to miss a future classic like Matt Fotis’ Oedipus: The Prequel. And don’t be late—you might not be able to get a ticket. 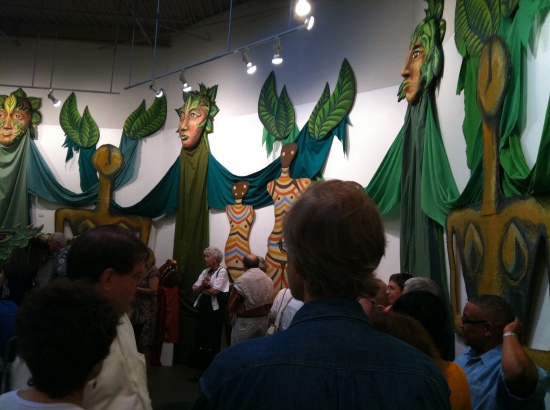 Opening night crowd waiting to enter the ArtsCenter theater, under the watchful eyes of Paperhand’s grand puppets. The line circled the lobby.