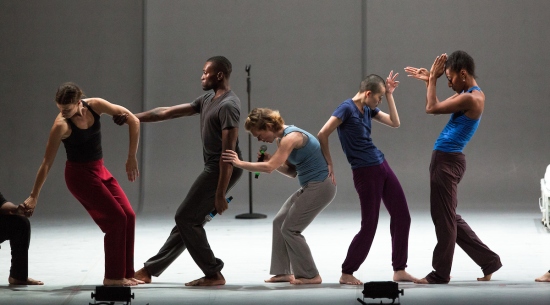 Two years ago, Bill T. Jones brought the first segment of a planned trilogy to the American Dance Festival; last year he brought part two, and this year, the full trilogy is having its debut as a completed whole, on three successive nights. On July 27th, the DPAC saw the return of Analogy/Dora: Tramontane.

Since 2015, Dora has tightened up a lot, and this performance was very good. Some of the baffling textual repetitions have been removed, and some of the trickier microphone hand-offs, but more importantly, the elocution and vocal expressiveness of the dancers has  improved immeasurably, rendering the stories much more powerful and making it easier to see the dancing and understand its language. What hasn’t changed is the work’s cool tone. It’s not about feelings or emotional response, it is about the facts and mysteries, about self-generated action and fate (all that we cannot control or order). For a fuller description of Dora, please see my previous review.

Tonight, July 28, will see the much anticipated return of last year’s second trilogy section, Analogy/Lance: Pretty AKA the Escape Artist. This was one of the best dances in last year’s festival, and I’ve been thinking about it all year. High recommended. See my review of last year’s show here.

Saturday night (7 pm), the final puzzle piece will hit the stage–the ADF commissioned Analogy/Ambros: The Emigrant. Lance certainly modified understanding of Dora; I would guess Ambros will further clarify Jones’ ideas. This will be the final performance of the 2017 ADF season.

The Bill T. Jones/Arnie Zane Dance Company in the world premiere of Analogy/Lance: Pretty aka The Escape Artist, at ADF 7/1/16. Photo: Grant Halverson.

If you love dance and you were not in the Durham Performing Arts Center last night, you need to be there tonight, 7 p.m. sharp. Bill T. Jones, who has been using non-dance elements in his pieces for many years with varying success, has gotten all the elements working together in beautiful synchronicity in his new dance, Analogy/Lance: Pretty aka The Escape Artist. The American Dance Festival-commissioned work had its world premiere at the Festival July 1. The second installment in a planned trilogy, Analogy/Lance follows last year’s Analogy/Dora, and uses some of the same devices, but to far more powerful effect.

In many of his previous pieces involving storytelling, Jones has preferred to fragment the story and arrange its parts, often intermixed with contrasting material, in dance-like constructions in which the fractured narrative elements may repeat, modulate and circle back to an initial concept. While highly intellectual, this approach tended to make the narrative confusing, or even to obscure it meaning and purpose. Because the ideas were so broken up, so was the movement, its energies bombinating among verbalizations, projections and high-design stage spaces.

But for Analogy/Lance, Jones, his associate artistic director Janet Wong, and the company dancers have kept the storytelling on a straightforward narrative arc, and the dancing has the straight-ahead drive of a bullet train. It is absolutely thrilling. The story alone would be compelling; the dancing alone would hit a high mark in the Festival season; the music (Nick Hallett) alone would take you to far places of the soul; the uncluttered set (Bjorn Amelan), unpeopled, you could watch just to see the lighting (Robert Wierzel) and projections (Janet Wong) change on its surfaces and objects. The costumes (Liz Prince) need the bodies–but in them, the bodies convey even more about character, place and time. This is the whole package, a complete work of art in which every element is necessary and all are in harmony.

Cain Coleman, Jr., left, as persona Pretty, knotted together with Talli Jackson as Lance, the man who created him. Analogy/Lance: Pretty aka The Escape Artist premiered at the American Dance Festival July 1, 2016. Photo: Grant Halverson.

As he has often done, Jones has drawn on his own life for material. The subject of this story is Lance T. Briggs, Bill T. Jones’ nephew. The two began an oral history project together in 2014, and its questions and answers form the basis for this dance-theatre work. Sometimes we hear their recorded voices; at others, the dancers speak into microphones; at other times, a singer speaks the texts. (The many awkwardnesses of microphone usage in Analogy/Dora have been rectified.)

And what a story! As a young boy, the preternaturally talented LTB (as he is often called) trains at the San Francisco Ballet School–but soon he is on the streets, “preying” on men looking for young boys. Sex, drugs, partying…he becomes a stripper, and a male escort. Eventually, he creates a character, a persona, Pretty. Lance and Pretty are inseparable, but not quite the same. They have a helluva time, whether in performing in clubs or falling in love in prison. Love, HIV positivity, visa problems–nothing slows Lance/Pretty down until one day his legs quit working, nobody knows why. Brought to a standstill, confined in the body that had always previously allowed him to escape from any situation, Lance struggles to control and come to terms with his own alter-ego–the character he invented, and who invented him–and the struggle supplies the dramatic tension in this incident-crammed narrative. It’s a true story, but also an analogy for the human condition. 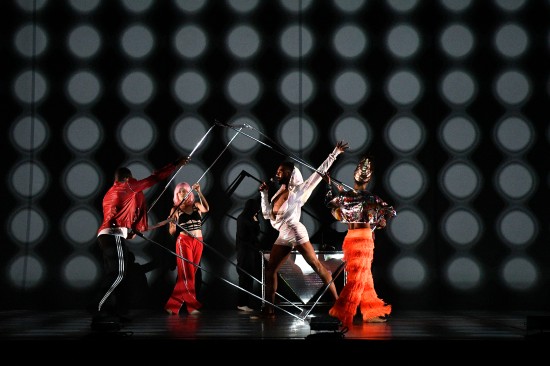 The rich music/sound score for this production includes a trove of recorded songs of various types by different artists; some lyrics written by Lance T. Briggs; music composed by Nick Hallett, with him playing and singing, along with baritone Matthew Gamble, as well as assorted sounds associated with the story. The whole is so remarkable that I sent in some questions, which the composer kindly answered at length. I include his responses here, as they shed light on the creative process in a complex endeavor like the Analogy trilogy.

“Work began on the score for Lance before the choreographic process, I started to think about the music as we were developing the first part of the trilogy, Dora, which premiered last year at ADF.  There are details of Lance’s world evident in in that piece, if you listen closely.  Similarly, Dora’s music peeks through the cracks of the Lance score.  Of course, the main work on the score began as recordings of the interviews came my way, filled with Lance’s stories and song lyrics.  These served as the greatest inspiration.

“It’s a very back-and-forth process with Bill [T. Jones], most of the ideas are generated in the studio alongside the choreography and dramaturgy. The “production numbers” aka Lance’s sketches of songs were fleshed out in advance of the rehearsal process, based on the interview materials.

“Matthew Gamble the baritone was singing, in addition to delivering spoken texts.  I was singing (in my upper register, mostly!), playing electric piano, and performing live electronics.  I also created nearly 300 sound cues that are called by the stage manager and executed by the sound designer, Sam Crawford.  One other important musical contributor is the company member Antonio Brown, who is a DJ.  He starts the show off with his mix of the Evelyn Champagne King song, Shame, and acts like something of a Greek chorus throughout, mixing and scratching dance music samples into my score.”