What do you do next after the New York Times has declared you “America’s greatest contemporary ballerina” but your body says the time is approaching to “leave ’em while you’re lookin’ good”? If you are Wendy Whelan, you retire from your position as a principal dancer in the New York City Ballet covered in glory;  plunge into the unknown with your Wendy Whelan New Works Initiative, and call the first work made after yourself: Restless Creature.

In actuality, Whelan’s career with the NYCB and the foundation of her Initiative overlapped, with hip surgery in the middle. 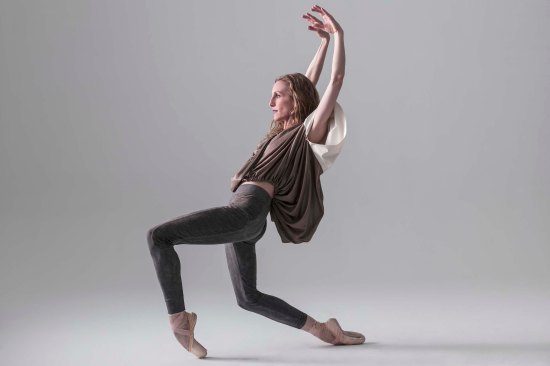 “I met with Wendy Whelan about three years ago to discuss the project,” said Carolina Performing Arts executive director Emil Kang from the stage on April 21. Restless Creature was co-commissioned by CPA, Jacob’s Pillow Dance Festival, and the Joyce Theater Foundation (yes, Carolina’s playing in the big leagues here). Whelan was scheduled to bring it to CPA a year ago, but a week after its August, 2013 premiere at Jacob’s Pillow (excellent video of artists in discussion here), Whelan went in for hip surgery and touring went on hold while she healed. She returned briefly to the NYCB, giving her farewell performance October 18, 2014, then turned her attention back to Restless Creature and other new projects.

Dance fans may remember that Whelan appeared, rather surprisingly, with the Martha Graham Dance Company at CPA two years ago, shortly before CPA announced its 2014 schedule. “We were the ones who gave the work its final technical rehearsals before its premiere at Jacob’s Pillow,” said Kang, to the eager audience last night, who had been waiting an extra year for this member of “ballet royalty” to sweep long-legged across the Memorial Hall stage, in four pas de deux with four (male) choreographer/dancers.

It was worth the wait. Whelan’s extraordinarily beautiful line and exemplary technique are well-known, but the force of her will, her precision and command of space, along with her humor and her joyful buoyancy, when experienced live, still leave the viewer alternately holding her breath and gasping in wonder. Whelan’s not that big, but she can make herself very, very long. Her outstretched arms gather it in, and her extended legs just eat up the space. There was nothing, other than the absence of big leaps (which would have been unlikely in these choreographies, anyway), to indicate that she’d so recently been under the knife. I didn’t see one second of hesitation or inappropriate delicacy; she was strong, bold and sure, and her partners certainly didn’t treat her like she might break.

It was fantastic to see works by these four compelling contemporary choreographers in such close proximity in time (program with music details below). There was barely time to reset my stopwatch between dances (11:43; 16:00; 11:24; 13:18, with Whelan dancing most of each one), so one could quickly spot the commonalities and contrasts. Alejandro Cerrudo’s Ego et Tu was smooth, a flow of opening and closing shapes and ribboning turns with some magical lifts that somehow signified a partnership of equality. A period of silence made the bodies stand out like bold print. Joshua Beamish’s Conditional Sentences was very brisk and funny, with quirky offsets and amazing reversals of motion above and below the waist. Kyle Abraham’s The Serpent and the Smoke, for which the back curtain was raised and the lights turned toward the audience, also had a liquid quality, but also wonderful passages of skipping, and a lot of mirroring of the bodies. For one indelible image, Abraham and Whelan both lay on their sides, facing the audience, each propped on one elbow, their forearms pressed into one column, their heads inclined towards each other above it, brilliantly lit from the front, burnished against the gloom behind them. There was something about opposites here, in a yin-yang way, balancing opposites.

First Fall, by Brian Brooks, was heart-stopping from start to finish. The stage was further stripped–the back scrim raised, the side curtains lifted to reveal the lighting trees, with all the lighting heads set low. Whelan emerges into the raw space, looking for an instant lost and young in her little yellow dress. After some tentative encounters, Brooks gives her a light instigating shove on the shoulder, and the genie billows out of the bottle. They move together in amazing ways–then the music stops. Once again, the unaccompanied motion looks bigger and bolder, more daring and honest, and as Whelan passes in front of the sidelights, the sculptural articulation of her musculature is clearly delineated. Then a new music begins, and the first fall happens. Brooks crouches on all fours; Whelan leans back and back and back until she has to let go and fall onto his back. He raises her, and they do this over and over in many variations as hypnotic as the Philip Glass music. My wits were thoroughly scattered, my heart beat madly. Here’s a little video from Jacob’s Pillow.

Kang hinted that Whelan will return to CPA–be ready to get your tickets. The new season will be announced next month.

Music: “Monologue” from Perfect Sense and The Twins (Prague) by Max Richter;
Orphée’s Bedroom by Philip Glass; We (Too) Shall Rest by Ólafur Arnalds; Intermezzo II by Gavin Bryars

First Fall was commissioned by Damian Woetzel for the 2012 Vail International Dance Festival in Vail, Colorado.