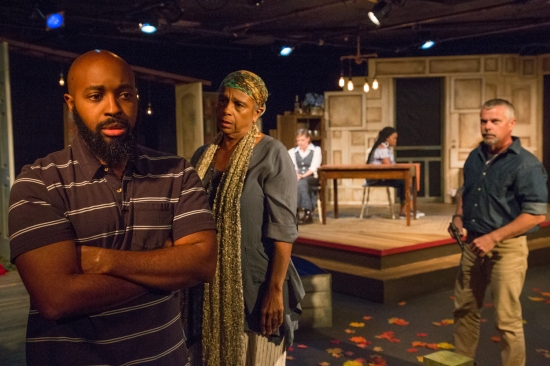 Although the first show of its Other Voices series took place last month, Manbites Dog Theater’s own final season has just begun, appropriately, with a contemporary re-make of Anton Chekhov’s great play, Uncle Vanya–Aaron Posner’s Life Sucks. (the period is part of the title). Does it or doesn’t it? Maybe only sometimes.

For instance, it totally sucks that this is the next-to-last production Jeff Storer will direct at the theater he and his partner Ed Hunt co-founded, and damnitall, it sucks to mourn this ending of theater in Durham as we have known if for 30 years before it even occurs. But it is a fine thing to go down laughing–which one does frequently during this deft and touching exploration of the longings and frustrations of a group of people who know each other well, if not as well as they thought they did.

As you may remember, the action in Uncle Vanya is precipitated by the arrival in the country of the professor, the titular owner of an estate he’s never worked, with his young second wife, and the intention of selling up to finance his city life. Such a sale would render the professor’s daughter and her uncle homeless. Posner retains this basic plot driver, and Storer renders it even more potent than usual due to the parallel with his theatrical home, which its board has decided will soon be sold, albeit for a better purpose—and this intention will not be reversed in the fourth act.

So we are sad; we are in a time of retrospection and elegy—but Posner’s having none of that. He’s mashed up Uncle Vanya with Billy Wilder’s hilarious 1959 film Some Like It Hot and if that doesn’t make you laugh, check your pulse. Storer’s staging is highly reminiscent of Wilder’s, with everyone chasing the object of his or her desire around in circles.

Ella (Jessica Flemming) listening to Vanya (Thaddaeus Allen Edwards) as he tries to explain himself–his real self–in hopes of winning her away from the Professor. Photo: Alan Dehmer.

The Marilyn Monroe role is played here by Jessica Flemming, as Ella, and it requires no effort to understand why she’s being pursued by all and sundry: She’s a dish. But she’s sticking with her man who wears glasses, even though he now provokes more pity and irritation than love in her. Flemming gives her character’s forthright rejection of various others’ impassioned propositions a winsome quality that keeps reminding the viewer that she’s much more than a pretty face.

Ella’s interactions with her husband may be lackluster, but the Professor, beautifully played by Michael Foley, still generates sparkle with the world-wise Babs. This is Rhetta Greene’s first Manbites appearance (in the midst of death we are in life) and I expect she will have quite a fan club by the end of the run. After a career on the New York stage, and in TV and film, and a nice long rest, she has begun to appear locally. If Jeff Storer ever allowed anyone to steal his shows, she would have done it. Her portrayal of Babs is fantastic–wry, unhurried, amused, warm–and she generates heat and light even in the cooly self-centered Professor.

Michael Foley–long a mainstay of the company, now in his final role for Manbites Dog–gives one of his finest performances. His speech on age and infirmity was note-perfect on preview night, and had me sobbing into my sleeve. He plays the Professor very low key, so the content of his speeches ambushes you, and ultimately he makes the Professor a more sympathetic character than you generally find in Uncle Vanya. 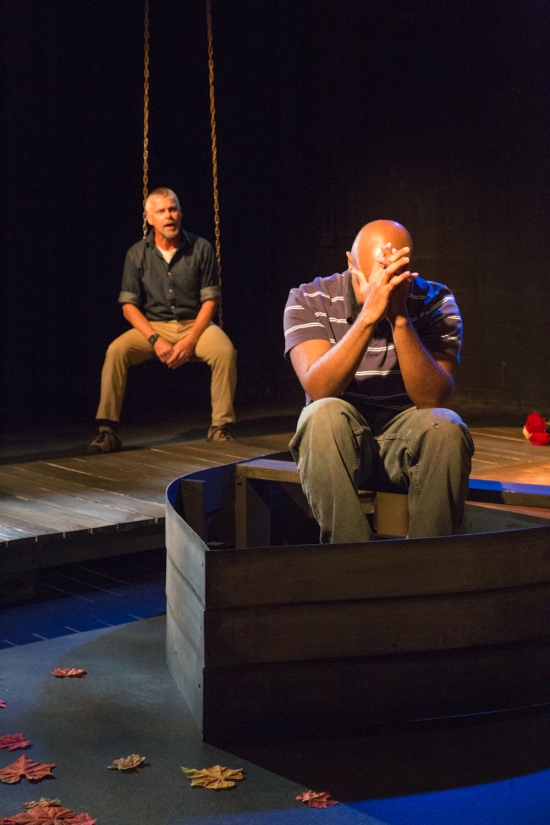 The same could be said for this production’s Vanya–Thaddaeus Allen Edwards. Vanya’s still exasperating, but somehow more lovable. Sonya Leigh Drum’s wonderful set seems designed especially for Vanya’s moment of crisis, which takes place in a truncated row boat without oars. As Vanya contemplates suicide, all the characters he has played at Manbites seem to glide across the imaginary water, across the viewers’ minds’ eyes, as if it were our own lives possibly coming to an end. Vanya is of course rescued by his friend, Dr. Aster, played here by Jock Brocki with perhaps just a little much emphasis on the doctor’s stultifying ennui.

Certainly Sonia, who’s crazy in love with him, can’t pierce the doctor’s fog. Faye Goodwin handles Sonia beautifully, and is especially adept at the self-aware switches between the play’s interior and its turning outward to inform or harangue the audience directly. The scenes between her Sonia and the doctor give the production some of its broadest humor, and her blunt self-evaluations give it a painful poignancy. In Posner’s script, Chekhov’s character Waffles has been replaced by a female character, Pickles, and Goodwin makes Sonia’s introduction of Pickles very sweet. 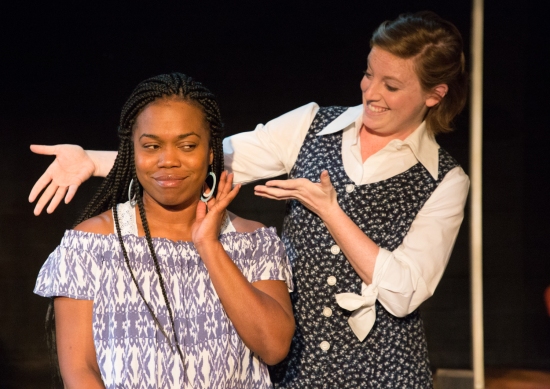 In Pickles we see that Lakeisha Coffey has found her light as a stage actor. Partly this is due to the actual light provided by Chuck Catotti’s excellent design, but mainly is it because Coffey has matured (before our very eyes on the Manbites stage) into an actor who can go far beyond her known world, and take us with her. She is captivating here, and in command of a character very different from any we’ve seen her play. Although this is a small role, she leaves a deep memory imprint with it. The scene with the puppets (designed by Angela Spivey), with which Pickles tries to seduce the universally popular Ella, is unforgettable, and will go right up there with Coffey’s characterization of Ann Atwater (Best of Enemies) in her roll call of achievments.

The production’s design team also includes two other long-time Manbites contributors: Derrick Ivey, who did the costuming; and Shelby Hahn, who has provided a rather surprising, if unobtrusive, aural analogue to the action. All the design components mesh particularly well in this show, supporting the script, the acting and the wise and gentle direction. Contrary to what the title might lead you to think, this play and its production here make you feel better about almost everything. Rhetta Greene’s Babs has a lovely speech about saying her gratitudes every day, and Thaddaeus Edwards’ Vanya declares, with angst and joy, that all he wants is to love and be loved (cue Marilyn Monroe singing “I Just Want to Loved By You”). Taken together, these two speeches strike me as reflecting director Storer’s own values: this show seems like a statement of grace in an ungraceful world.

Given the size of the crowd at preview, and on opening night, advance ticket purchase is advisable. 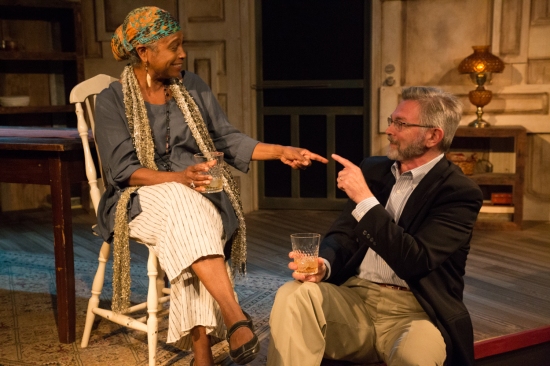