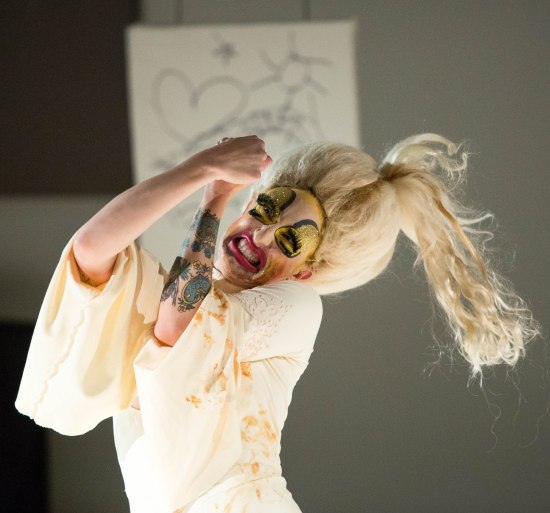 Cherdonna performing Clock That Mug or Dusted  at the Living Arts Collective as part of ADF Out of the Box. Photo: Ben McKeown.

Cherdonna Shinatra‘s ADF performance Saturday was along the general lines I had expected from reading up on her, and talking with her, yet I can’t recall having been as surprised at ADF since I first saw Dairakudakan (or at least Rosie Herrera), as I was by the first of Cherdonna’s series of six performances in the Living Arts Collective theater on West Geer St.

The outward appearance of Clock That Mug or Dusted is one of induced chaos (and there’s not much dancing), but it’s driven by a subtle mind that has created this mad melange with its own sly kind of order. If you have any interest in the further reaches of performance art/dance theater, I urge you to go to one of the two remaining performances–Monday 26th and Tuesday 27th. This art is not going to submit to rational analysis: it must be experienced; I can’t describe it for you beyond saying that this is some superior strangeness, high-chroma, with lots of sensuous substances spread around, and lots of great physical theatre.  Although some audience participation is required, those who play are well rewarded, and Cherdonna won’t pick on you if you really don’t want to participate.

Cherdonna’s creator, Jody Kuehner, seems to have drawn sustenance from many sources. Not just from Cher and Madonna, the performers whose names she has appropriated, but Dolly Parton, too. Not just the work of 1960s feminist body art/dance practitioners, and drag style queens, but children’s puppeteer Shari Lewis and her character Lamb Chop. Plus 1970s womyn’s music, Mr. Rogers, Sesame Street, and Shen Wei. Also physical clowning traditions–and Butoh. And Mary Tyler Moore. The incredible thing is that it holds together. Often hilarious, it is also unexpectedly touching, and really, very sweet. Cherdonna clearly subscribes to the “honey draws more flies than vinegar” technique of winning friends and influencing people, and honey, she loves her some paradox.

48 hours later, and I’m still feeling like the boa constrictor that swallowed the elephant: this is going to take a while to digest! Tickets here.