Durham playwright Howard L. Craft has leapt to a higher level of prowess with The Miraculous and the Mundane, his new two-act piece now in a workshop production at Durham’s Manbites Dog Theater, in association with StreetSigns. This four-character play deals with a lot of life’s hard stuff, but–although its notes and chords are words and sentences–its affect is much like that of a large complex piece of music. The sounds, the rhythms, the undertones and overtones, the minor chords top-dressed with flowers of laughter, the modulations and sudden reversals of tempi and mood: all are so richly orchestrated that you could just listen to the sounds and get to their purport, if not to the details of this story. It is one hell of a piece of writing, and director Joseph Megel, continuing his multi-play relationship with Craft and his work, knows just what to do with it.

Unlike Craft’s FREIGHT, which manipulates time and space to tell of the sameness of a Black man’s fate in America over many decades, The Miraculous and the Mundane takes place in this here and now. It is set in the Durham of today, and it shows a Black family grappling with a fate unconnected to race: Dementia.

Trevor Johnson as Percy and Lakeisha Coffey as his daughter Chloe in THE MIRACULOUS AND THE MUNDANE, by Howard L. Craft, in the current workshop production at Manbites Dog Theater. Photo: Ed Hunt.

Percy Nelson, scorchingly played by Trevor Johnson (his most vivid and heartfelt performance to date), along with his best friend Bone, portrayed by the completely charming Irving W. Truitt, Jr. (they “go back like Blacks and Cadillacs”), survived the Viet Nam War, where they fought as Marines–but Percy’s losing the battle with memory. He retreats from one scant cover to another, but finally the only one in denial about the presence of the enemy is Bone. Percy’s daughter Chloe faces the facts first, and in this role Lakeisha Coffey once again excels herself. Ron Lee McGill, last seen at Manbites as the struggling brother in brownsville song (b-side for tray), has developed considerably as an actor, and he gives the frustrated, angry, Junior a frantic kind of stoicism, then cracks him right open in a crucial scene. Joseph’s Megel’s astute direction is in evidence here, forcing us to contend with the uncomfortable reality of Junior, who is kind of a jerk until he’s not. Junior takes up a lot of space and keeps the atmosphere edgy and potentially threatening. 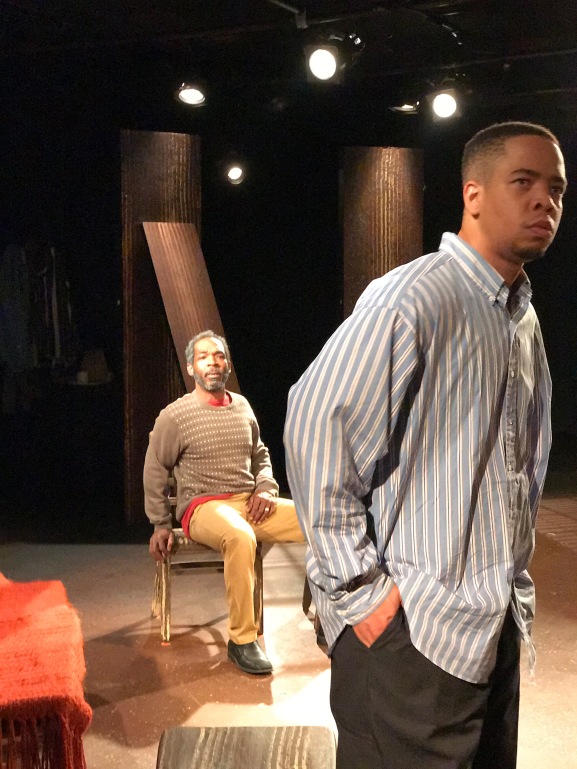 Trevor Johnson, left, as Percy, and Ron Lee McGill as his son Junior, in Howard L. Craft’s new play THE MIRACULOUS AND THE MUNDANE, at Manbites Dog Theater through April 1, 2017. Photo: Ed Hunt.

In addition to chronicling a brave man’s descent into the hell of dementia, and the concommittant downward suction on his family and friend, The Miraculous and the Mundane limns the freedoms and constrictions of a hard-earned middle-class life on Alston Avenue. After the war, Bone started a car repair shop, and Percy a dry cleaners. They have both done well in business. Percy put his two children through college, has a comfortable house, still runs the cleaners. He mourns his wife, who was killed in a car accident a few years previously. Daughter Chloe (Spelman graduate; MBA), having just received another humiliation from her cheating husband, has come home for a while, and it is she who realizes that something is wrong with Daddy. Coffey gives a powerful performance as the secretive wounded wife/daddy’s girl/frightened good daughter/pissed off sister/caretaker of the father who no longer knows her. She literally vibrates with emotion, and often had me in sympathetic tears.

Junior, a unpromoted bicycle cop with the Durham police, refuses to see Percy’s decline, because he’s just about to lose his home due to an adjustable rate mortgage and the self-deluding thinking that led up to taking it out, and he is focused on getting Daddy to lend him the needed money. He is also married to a white woman, whose father wants to bail them out. So Junior, in addition to having all the issues that come with being a strong father’s junior, is in a terrible squeeze. He’s getting no respect anywhere, and getting nagged at everywhere (none of it his fault, of course), he’s got to satisfy the bank, and he absolutely is not going to take the money from a white man, even though the man’s now family. After a devastating scene of father-son sparring, Percy refuses to lend the money and when Junior storms out, Percy tells Chloe, with disgust, sorrow and a kind of perverse pride, “your brother married a crazy white woman when he could have married Black royalty.”

Now this right here is one of the reasons I love to see a Howard L. Craft play. I cannot walk into a room in real life where anyone would say that as long as I was there–that and quite a few other of the choice lines and small revelations that stand out for their verisimilitude, like bottleneck guitar riffs above the rich thrumming of the textual music in The Miraculous and the Mundane. (There is also an excellent soundtrack by Joseph Amodei, who did the smart lighting, too.) Craft did it with Caleb Calypso, he certainly did it with FREIGHT, and he does it here–he takes me to places and understandings that are not available to me outside of art. The wonderful flip side to that is that the same plays show, to other viewers, a world they know but rarely see depicted on stage. I dare to hope that Howard L. Craft will one day be known as a 21st century August Wilson…perhaps there will even be a Durham cycle of plays.

This is theatre at its most miraculous, not stinting on philosophy, but giving us back the mundane, a little polished up so we can see it better–our little lives projected large, with dramatic incidents as overwhelming as we feel them to be in the privacy of our dogged dailiness. Some–a great deal–of The Miraculous and the Mundane is completely particular to Black people (and thankful I am to peer into that reality and even more to listen to it) but the greater part is simply particular to people. It feels honest, it feels real. After the opening night performance, the actors told me, separately, that the familiar realness was partly why they were able to get the workshop production into such an advanced stage of readiness in a mere two and a half weeks. Craft said that he’d written the story using the people and places and speech patterns he knows–“these are my uncles,” he said of Percy and Bone–and from personal knowledge of the terrible progress of dementia through a family. Since the personal is political, this play is political–but it is not propagandistic, theoretical, conceptual, or speculative. The only question is whether you will be able to get tickets for this limited workshop run, or if you will have to wait for the full production, tentatively scheduled at Manbites Dog Theater early in 2018.

Daughter and Daddy: Lakeisha Coffey and Trevor Johnson as Percy and Chloe in THE MIRACULOUS AND THE MUNDANE, by Howard L. Craft, at Manbites Dog Theater. Photo: Ed Hunt.