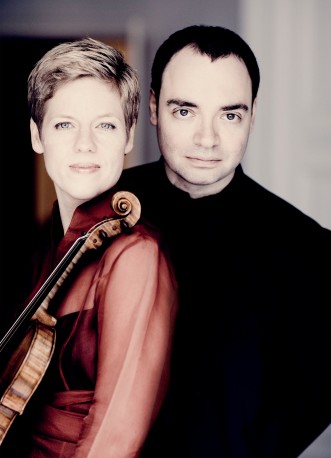 I had thought, when I calendared a concert the night before Election Day, that surely Beethoven would surge over the roiling anxiety, drowning it for an hour or two. But the three-sonata concert by Isabelle Faust, violin, and Alexander Melnikov, piano, at Carolina Performing Arts lacked the over-aweing force that might have quieted the panicking inner voice.

The world as I know it will change by the end of this day. If it goes one way, well and good; if it goes the other way, as I kept thinking during the program, concerts like this may become few and far between, their suavity and cultivation being the opposite of the crass, coarse and crude. It’s cold comfort, but I remind myself–Beethoven survived even the Nazis (although only because he was already dead).

A chamber music concert by highly accomplished musicians playing works by one of Europe’s greatest artists ever pretty much defines the upper reaches of a rarefied type of Eurocentric high culture. For each two concert musicians of this caliber, thousands have been winnowed. That is how is goes with art: not everyone is among the best. There is a hierarchy. These are not characteristics to appeal to the deplorable mob. Artistic greatness can attract a vast, varied audience, but that rarely happens with classical music. This is “high culture,” which requires an “elite” audience, and on November 7, UNC’s Memorial Hall was far from full. Although, as far as I can tell, all that is required to be among the elite is the ability and willingness to sit very still and focus your hearing–to use your ears like you use your eyes in a museum.

Sometimes a painting is too subtle to attract your notice–too quiet in its purity, and that is how the music seemed last night: too quiet for my unquiet soul. Faust plays a Stradivarius with a silken ethereal tone, and her long bowed lines draw out like warm caramel–but there was a singular lack of emotion and emphasis in her and Melnikov’s interpretation. At times, one could barely hear the violin over the piano, although when the two instruments were in conversation, both were clear. Once again, political analogies raised their sorry heads.

Faust and Melnikov were both youthful prodigies. Separately and together they have won numerous high-level prizes (including one for their recording of Beethoven sonatas) and are now in successful mid-career. While their interpretation was elegant and utterly clean, it seemed to lack sympathy for the struggling parts of the music. To my taste, later Beethoven–further from the classical, closer to the romantic–is more powerful, so the two earlier pieces they played, Sonata in A minor, op. 23, and the F Major, op. 24 “Spring,” were of less interest than the later Sonata in G Major, op 96, which came after intermission. It’s a much more emotionally compelling piece of music, and both players gave us some beautiful passages…but it was not magnificent. I got more satisfaction out of the pretty Viennese pastry of the F Major. However, the sugar rush led to the inevitable sugar crash and return of existential nausea. The dramatic element of soul-cleansing catharsis was absent from this program.