The American Dance Festival 2016’s Footprints program was bifurcated this time, with the second part occurring in Duke Gardens July 28-30. Part Two, featuring a work by Vanessa Voskuil, takes place in and around the heron fountain circle, and should you be quailing at the idea of standing around outside in the heat, know that the circle is well shaded by the 7 p.m. start time. FREE. 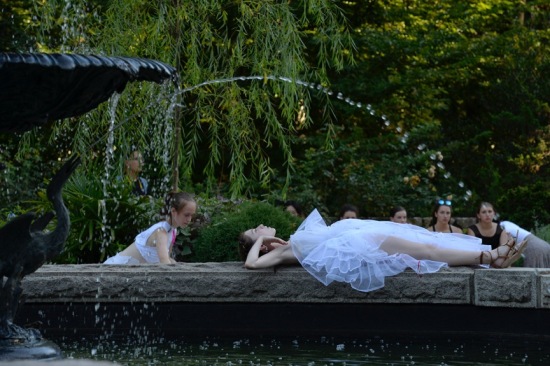 This outdoor venue provides a much better setting for Vanessa Voskuil’s choreography than Reynolds Theater did three years ago. It allows her to work with the indefinite and the random, and to create with shape and movement on a large scale, without the contrivance and constriction required by a theater. Walk is without a clear moment of beginning, and the end is equally indefinite. The dancers move among the people who’ve come to see them, and the many others who find themselves in the midst of something as they transit the circle on their own trajectories. It’s a sweetly worded statement of this dancer’s understanding of the relationship of dancing and living–that we are all part of the performance.

Voskuil described the dance as a series of solos–but they are simultaneous solos by the 16 dancers (I think there were 16, but not ever seeing them all at once, it was hard to keep count). Many things of a ritualistic nature are walked and danced in a very slow tightening circle around the grand fountain. There’s little in the way of music, but the dancers all move at the same slow pace, smooth, almost tranced, and very liquid in their actions. There are echoes of some great modern choreographers, from Isadora Duncan on, and several of the young Terpsichores wear sneakers.

The basic image, of dancers in circling in nature, predates history, I feel certain. It’s an archetype; it cannot be reduced to a cliche. As an archetype, the great circle dance provides endless nourishment to art, and Walk is a smart response to its impetus. Voskuil recreates something primal– as art; and creates it not in nature, but in the artificial nature of a garden.

Perhaps because I know that Voskuil is from Minneapolis, MN, and because I lived there for a year when I was 12 and was much affected by the glacial landscape with its thousands of ponds and lakes, watching this dance threw up memories of people circling those small bodies of water–walking, cycling, skating, sailing, twisting in and out, each person on his or her own mission, projecting a line of motion that wove neatly through all the other lines. One thinks, too, while watching Walk, of Seurat’s La Grade Jatte, with its ritual promenading by the water, its parasols and late shadows, its rhythms receding into the distance. As a dance, Walk cannot indulge long in motionless monumentality, but its slow weaving and turning around the water’s edge invoke timelessness nonetheless. 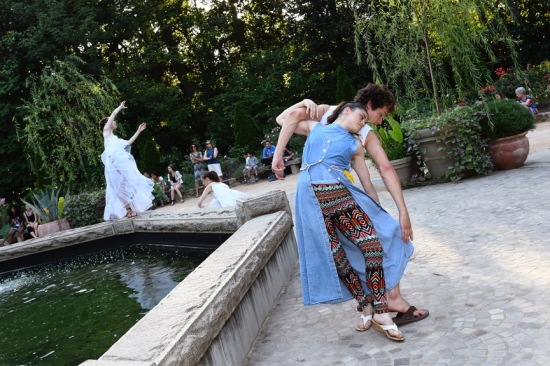