Company Wang Ramirez blew like a fresh clean wind into the ADF last season. This year they have returned with a darker work that–although it was made in 2013–captures the fearful zeitgeist of 2016. The dancing–augmented by aerial work–is no less amazing than that in last year’s American Dance Festival presentation of Wang Ramirez’ Monchichi. But Borderline replaces the cheerful identity-wrestling of Monchichi with unnerving switchbacks in the imagery–home becomes prison; flight becomes captivity;  friendliness morphs into hostility with a single gesture. Borderline‘s 70 minutes are utterly engrossing, its aesthetic glories underlined by the hinted horrors of confinement and restraint, and by occasional outbreaks of violence. 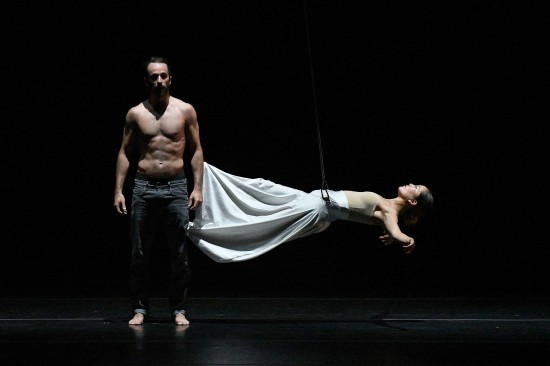 The company’s style is based in hip-hop, but incorporates–whatever it wants or needs. In this case, there are five dancers and an aerial rigger, whose work is not hidden, keeping us aware of his complex role. He can give the dancers freedom from gravity; he keeps them safe. But he also restrains and restricts them. In the beginning, two women in harnesses, led to separate lines, struggle and surge toward an open steel construction. One will make progress, but her progress drags the other back–or perhaps she/they are both puppets and the rigging master represents Fate. Eventually one dancer reaches “home” and we breathe in relief. But “home” quickly turns to a prison cell. Every image of safety or freedom is complemented with one of danger or confinement. The steel constructions (which reminded me of Antony Gormley’s constructions for Sidi Larbi Cherkaoui’s Babel) are continually reconfigured by the dancers, and the flow of movement is never broken–yet one feels the hovering possibility of brokenness, of a forced halt, of freedom impeded. There are many images implying a puppet master controlling the action.

It’s possible that I’m over-reading this, but I don’t think so. It seems more likely that these multicultural Spanish-French-Korean-German artists were just ahead of the political curve with their interest in boundaries and borders, in what flows over and between and what is halted or corralled by the lines and boxes we make around our cultures and countries.

Whatever its meanings may be, Borderline is also chock-full of beautiful scenes and astonishingly vital movement–the kind of movement that makes a person proud to belong to the human race, and supplies a modicum of hope that we will continue to dance the earth a little longer.

One note: the lighting is very dim. The camera saw these scenes better than I was able to. If you have opera glasses or binoculars, take them. But by all means, go tonight if you can. Check with the DPAC for tickets–last night’s house was quite full. Be sure to stay for the joyous curtain call dancing. Last night Honji Wang whipped out a bunch of fouettés in the midst of her breaking and floor-spinning.