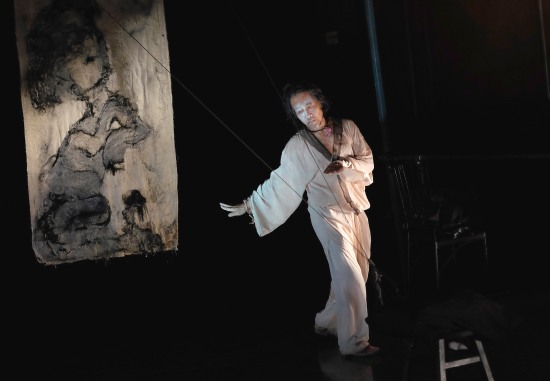 Koma Otake dancing in his solo work, The Ghost Festival in the 21c Museum Hotel. ADF Out of the Box, 7/12/16. Photo: Grant Halverson.

The American Dance Festival has teamed up with the 21c Museum Hotel (in the Hill Building/former CCB/Suntrust) to present an experimental artwork by Koma Otake, the male half of Eiko and Koma, who have performed regularly at the ADF since 1983. Eiko performed her own solo work earlier this year; at last Koma’s is revealed.

There is always a whopping dose of incongruity (though rarely dissonance) in the couple’s work together, and in Eiko’s solos–contrasts that pop you right out of easy thought ruts. But seeing Koma, his simple set limning the performance space, and his mixed media paintings in the handsome paneled ballroom of the bank turned sleek hotel was unusually high-contrast. If you’d never seen him before, the fact that he was fully clothed–and wearing shoes!–would not have seemed odd, but for aficionados, it was almost shocking.

The Ghost Festival, which will repeat July 13-14 at 8:30, is meant to begin in the hotel, then continue after an intermission out in the CCB Plaza (The Bull Plaza), in and around and under a small trailer that Koma has worked into an installation/performance space. On the 12th, an electrical storm nixed the outdoor activities. Koma improvised a second act, but begged everyone to return to watch the outdoor portion–weather permitting. (Approximately 9 p.m.) This interruption made it impossible to understand the scope of Koma’s undertaking last night, but the improvised second act was quite a Happening, with ADF students being pulled up from their floor seating to participate.

The Ghost Festival refers to a Japanese festival, occurring annually in August, in which people dance in slow circles for 24 hours, reaching out a beautifully open hand to live friends on one side and a curled hand toward the dead spirits on the other. The dead are remembered, and the individual feels his or her place in the flow of life.

This artistic ghost festival seems to evoke some particular spirits: Kazuo Ohno, a pioneer of Butoh, with whom Eiko and Koma studied before leaving Japan; and La Argentina (Antonia Mercé y Luque), a Buenos Aires-born Spanish dancer whose work had a great impact on Kazuo Ohno. It’s hard to say for sure, but there’s a sense of looking into the past…it is as if, gazing into the past, Koma sees Kazuo seeing La Argentina in his mind, and, as him remembering her, sketches out steps, gestures and turns that recall her to him. It was sort of like watching a magician pull colored silks out of an empty hat. The music for the first act is mostly Argentinian tango, and seeing Koma bring his style to it is an entirely unexpected treat. 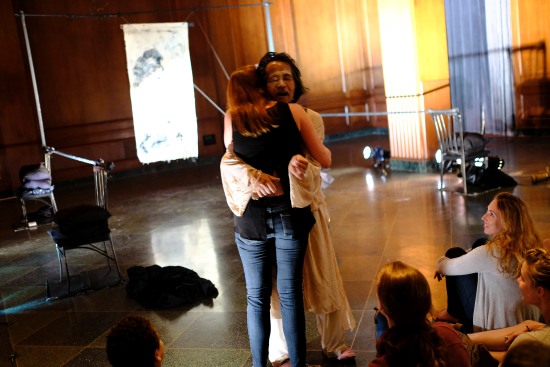 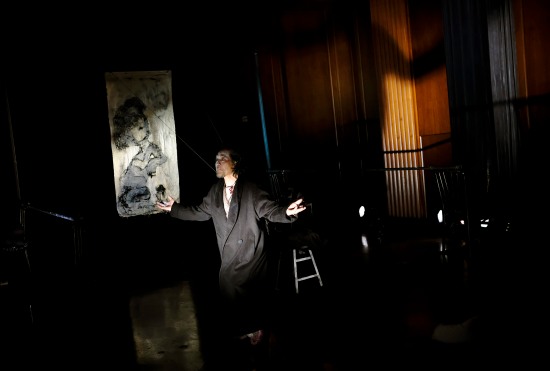 Koma Otake in The Ghost Festival, for which he created all components. ADF at 21c, 7/12/16. Photo: Grant Halverson.