American Dance Festival director Jodee Nimerichter’s adventurous and probing spirit is clearly at play in some of her programming, with its insistence that dance can be so many things. Last year we got a program of four ADF-commissioned duets; the year before, four solos by mature male choreographers. This year, in 5 By 5, we get a mixed program by five very different choreographers: two solos; one duet; one quartet and one octet.

Smart phones light the magic circle in Rosie Herrera’s Carne Viva, commissioned by the ADF, at its premiere in Reynolds, as part of the 5 By 5 program, 6/28/16. Photo: Grant Halverson.

The quartet which opened the program is an ADF commission by Rosie Herrera (who made a duet last year with Larry Keigwin). The new work, Carne Viva, in its premiere on June 28th, recalled the surprising surreality with which Herrera first rolled over us in 2009. This is a fairly short piece, set to three songs (as always, Herrera has chosen powerful music). It opens with an incredible feat that makes an indelible image: A tall man holds a short woman up in the air, his arms straight up. He holds her in the air longer than seems possible, then gently sets her down. He’s radiant with ardor; she’s distant and bored. Again he lifts her, this time sinking himself and pressing his head on her belly when he sets her down. And again, arduousness turning ardor to anger, he lifts her high; clutching and grasping at her feet when he sets her down. She exits; another woman appears and he lifts her, and exits with an anguished scream.

During the second song, two women–lovers?–tussle in an extremely dynamic segment; during the third, mystery and magic return. The piece concludes with a stunningly passionate female solo set against a backdrop of pure anomie–all the others are alone with their phones.

Rosie Herrera is an example of how important the ADF can be to dancers’ and  choreograpers’s careers. Former director Charles Reinhardt came across Herrera in her home town of Miami and invited her to the festival. Her work was well received and she was invited to return and new work commissioned. (She has now been presented at ADF several times.) While at the festival, she became acquainted with dancers here; two are included in this show–Durham native Hannah Darrah, and local dancer/choreographer Shaleigh Comerford, a piece of whose was included in last season’s Here and Now program (for which Herrera was one of the adjudicators). And of course, the other side of this is that we, the audience in Durham, has had the privilege of watching Herrera mature and expand on her early powers.

We’ve also seen Mark Dendy more than once, but I still don’t get it with him. He always seems to me like he’s squandering his talent on irrelevancies. His solo piece on this program is, blessedly, brief. What you see in the photo is what you get: Dendy in a chair, masquerading as one of the more horrible characters of recent American power politics, Donald Rumsfeld, and miming Rumsfeld’s actions during an interview which we hear in a recording. It involves a story about Rumsfeld, who knew nothing about him, meeting Elvis in his latter days of performing in Las Vegas. Possibly the point was that today most people are as ignorant of Rumsfeld as he was of Elvis; or maybe it is that Elvis is still widely–universally–known, but Rumsfeld, once so powerful, has become an unknown. Whatever, it was awfully irritating to hear Rumsfeld’s voice again.

Israeli choreographer Dafi Albtabeb’s duet, Never the Less, contained some striking similarities with Herrera’s work, with several positions and motions used for much the same purposes. But Albtabeb focused on a single couple, probably in a long-term committed relationship. Everything that happens is recognizable, and some of it painfully so–everything except the silken smoothness with which it unfolds. The dancing is very fine.

Gabrielle Revlock brings us back to physical delight and the amazement of physics with her hula hoop dance. In and out of the hoop she goes, shimmying it up and down and around in a rather incredible sequence. It’s almost as if the hoop is carving space, and certainly we become hyper-aware of different parts of her body as she moves the hoop. In her little white romper, a cross between old-fashioned gym suits and something a goddess would wear for frolicking, she seems playful, but as you can see from the photograph, she has some serious skills. My companion wished for more ritual meaning in the work, but I thought the motion and the space brought enough joy that anything else would have been superfluous.

The program closes with the marvelous Brian Brooks Moving Company. Brooks’ splendid choreography, a kaleidoscope of cycling patterning and dispersal, is set to a “recomposition” of Vivaldi’s “The Four Seasons” by Max Richter. This recomposition or refreshment is highly textured and muscular, full of pleasure and excitement. The dancing is the same: fresh and strong,  pretty and lyrical, bold, and buoyant. Apparently there is still room in the 21st century for some 18th century aesthetics.

The American Dance Festival hopped back onto the big stage at DPAC last night with an interesting program by the Stephen Petronio Company: two revivals of works by important (post)modernist choreographers, and a more recent work by Petronio.

The evening opens with Trisha Brown’s 1979 Glacial Decoy. I’ve never been able to warm up to Brown’s work–its concerns are just too purely formal for me, and I’m pretty much through with “the critique of the proscenium.” Here, a slow dance of large images dominates the stage–backdrop-sized black and white Robert Rauschenberg photos projected and moving through a slide show. The right-most image drops away, the other three slide over, and a new image appears on the left. The images are connected via formal commonalities, and our appreciation of those shifts as the context changes. It is pretty wonderful, although the viewer needs to keep in mind that the imagery would not have seemed so nostalgic or retro-cool in 1979.

These images are very large, and sometimes the scale within them is huge or very small. Although they depict space, the image panels are, naturally, merely planar in the physical space of the stage. Thus a tension is created between their specious hyper-reality, and the actual reality of the dancers’ bodies in motion, and by the play of scales (e.g. a very tall dancer apparently dwarfed by chair photographed to appear to be made for a giant). The most interesting thing to me about Glacial Decoy is the bumping of dimensional dancer-space against the impervious wall of depicted space. The dancers, four women, virginal goddesses in see-though white gowns revealing their fully human forms, work, without music, in a narrow band of the stage (compressed, I suppose, by two constricting conventions, the back wall and the proscenium), and are remarkably difficult to see clearly. Unlike the photo-imagery, they are never quite in focus. They move across and back from the line where their faces fall into shadow; the lighting on the sheer dresses makes them glow, blurring the lines of the bodies beneath. They are formal constructs, not people. All this has, or had, some intellectual merit, but for this viewer, there was nothing about the dance that made it as interesting as the photo flow. And for all of the work’s critique of boxed stage space bound by the repressive proscenium–it is performed on stage. For a different viewpoint, see this spring’s New York Times review. 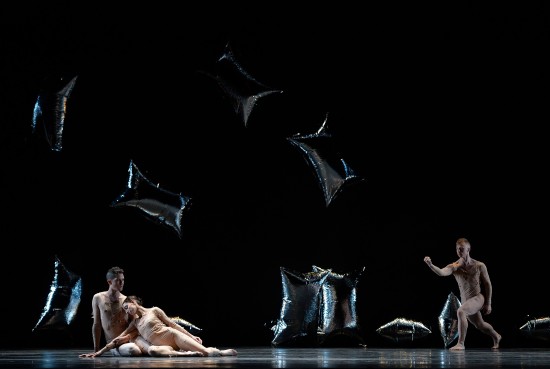 However, Merce Cunningham’s 1968 RainForest is another matter entirely. It is wonderful that there are dance troupes with the physical wherewithal to take on Cunningham work…it is not disappearing into history yet. The six Petronio dancers command the material: they are accurate and precise and brilliantly alive. Engaged in recognizable, if somewhat mythologized, human activities, they are not formal ciphers. The dance may be abstract, but the bodies are bodies. And in their sheer, tattered bodysuits, these bodies’ warm flesh with its ragged skin-toned coverings make the most delicious contrast with Andy Warhol’s “decor,” composed entirely of Mylar pillow-balloons. (In 1968, Mylar had only recently become available. A wondrous Space Age material, it signifies possibility, expansive newness, a fresh potential, in contrast to the eons-old ways of earthy humans and their myths.) The pillows gleam and glow silver and gold, and move gently in the air wafted by the dancers’ motions. There’s gorgeous strange electronic music by David Tudor (Rainforest) that at moments will scratch on your last nerve, played by Phil Edelstein and Ronald Kuivila.

The choreography has qualities that I’ve come to value more and more. Every single position and motion seem absolutely necessary, even inevitable. For all he played with randomness, Cunningham also played with certainty. Nothing mushy here, and nothing coy. The interplay of the clear and certain choreographed movement with the gentle random motion of the balloons has something in common with the Brown piece, but works so much better (and you may note some elegant commonalities with some of Paul Taylor’s dances). And the six dancers were magnificent throughout.

The Stephen Petronio Company in his Locomotor, at ADF, 6/24/16. Photo: Grant Halverson.

But wait! These high-stamina dancers were just getting warmed up for Stephen Petronio’s Locomotor (2014). This is dancing! One defining characteristic of Petronio’s choreography is his use of the arms. His own arms are very long and powerful and he’s given his signature sweeping movements to all the eight dancers of Locomotor. Oh, it is thrilling to see eight powerful bodies in continual motion, chests out, arms out, everything taut and whirling. The expansive arms and wide-stretching legs cause each body to take up lots of space, and the dancers build up lots of speed, coming close, so close, as they whip around each other, the outstretched hands interleaving; the ankles crossing, almost meeting. It is as exciting as the circus, the beauty and the danger together. There is not a lot of touching, so when hands do clasp, or one dancer lifts another, more hot sizzling electricity buzzes from the dynamo. The shape-making and the kineticism remain in ever-shifting balance throughout, at all tempi. I found it completely satisfying.

The fabulous dancing (Davalois Fearon in particular stood out all evening) is enhanced with Narciso Rodriguez’ bold costumes, strong lighting by Ken Tabachnick and a zipping score by Clams Casino. The program repeats June 25 at 7, with a pre-show, for ticket holders, by Shady Darling and the Velvet Curtain, in the Skyline Lounge.

Digital pictures made, printed and mounted by Bob McCoy, in a kind of photo-bombing. He has also ornamented bus shelters and various random sites in downtown Durham.

This delightful outdoor gallery appeared yesterday on the backside of downtown Durham’s Five Points. The infrastructure was in place, but the photos were just installed. They’ve survived one rainy night, but as with any temporary installation, you need to catch it while it is up.

Bob McCoy’s been the foreman on the big renovation of the former Kimbrell’s/Book Ex buildings for the past year and more, and it has been like having a good elf in the neighborhood. Need something? Smiles, hugs or heavy lifting? Up pops Bob.  He started this photo grouping with the image of the bumper sticker. Good philosophy. Gonna miss him when he’s gone, but will try to keep the spirit.

Photo of a photo by Bob McCoy. Car owner unidentified.