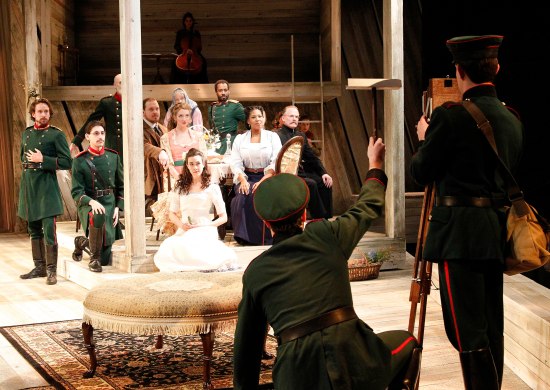 After several snow days, the PlayMakers’ Repertory Company‘s new production finally got to open on Tuesday, Jan. 26. It was not quite the celebratory occasion everyone had expected, the big welcome to PRC’s new producing artistic director Vivienne Benesch. But there is plenty of cause for celebration following the first public presentation, however delayed, of this updated classic. Benesch has beautifully directed an elegant new version of Anton Chekhov’s THREE SISTERS, by Libby Appel, and has gotten both seamless ensemble work and acute characterizations from the large cast, in the process bringing out many points of commonality between the life depicted in the classic play and life today. If you are new to Chekhov, this would be a marvelous introduction; for the repeat viewer, it may in some ways be a revelation, and not just for the success of the color-blind casting.

Given the deep understanding of character and human arrangements that Appel has demonstrated previously as a director at PRC (The Glass Menagerie, Vanya and Sonia and Masha and Spike) and her avowed lifetime passion for the works of Chekhov, it comes as no surprise that her Three Sisters provokes empathy rather than impatience with its philosophizing, unhappy people. (This new version was commissioned by the Oregon Shakespeare Festival, of which Appel is Artistic Director Emerita; she was assisted in the literal translation by Allison Horsley.)  Benesch, as she has previously demonstrated at PRC in her direction (especially of Love Alone, and In the Next Room), has a capacity of heart that allows her to show us humans with their marvels and their fears and foibles all blended.

Appel, Benesch and Chekhov together coax us into a nonjudgmental state of empathy and compassion for people whose weak or ridiculous qualities we might otherwise despise, and force us to ask the characters’ questions of ourselves. What do we really know? How do we get through this life? Is work the answer? Action, accomplishment, love: does any of it matter? Are we just stuck here, getting more stuck every day? Chekhov wrote Three Sisters in 1901, but sometimes this play (set in a Russia very long gone) seems stunningly modern, and very like Samuel Beckett’s Happy Days. 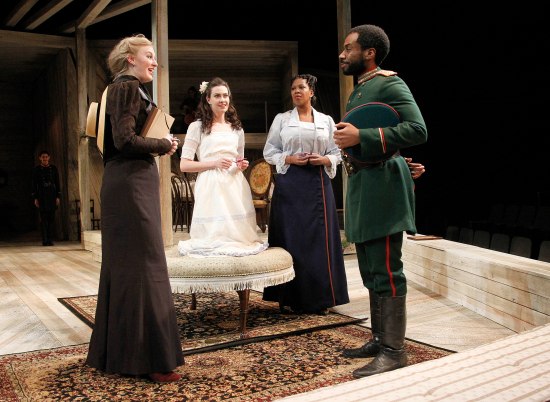 On Tuesday night, the cast, although having had their momentum interrupted before they had even completed previews, was uniformly solid, from the students to the longtime PlayMakers to the guest artists. But in the second act they rose again and again to brilliance, and all the passions running under their surfaces burned clear. Daniel Pearce is particularly notable as Kulygin, the kind, absurd, self-deluding schoolteacher whose bored and disappointed wife Masha takes up with the dashing Colonel. Pearce makes him pathetic, but not pitiful; we cannot laugh at Pearce’s Kulygin, although we know he is ridiculous. The production design by Alexis Distler and the solo cello music composed by Ari Picker and played from the stage balcony by Isabel Castellvi further encourage us in a mournful kindness to those versions of ourselves, our families, our societies, who are bumbling through life on stage. 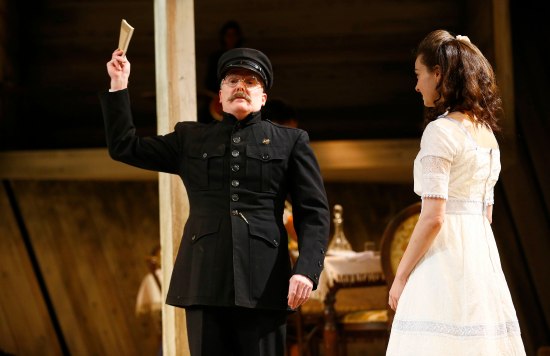 As happens on rare, wonderful occasions in theatre, some of the passions on stage became so real on Tuesday night that even the actors seemed to forget they were acting. Daniel Bailin, as the Baron, seemed to actually tremble while saying goodbye to Irina and going his brave and foolish way.

And Arielle Yoder, Allison Altman and Marinda Anderson were so far in character as the three sisters that when the lights went down and the applause went up, the three visibly had to force themselves back to the here and now, and stifle their tears so they could take their bows. Now that’s powerful theatre.

At PlayMakers through Feb. 7. Tickets here.

Arielle Yoder (Masha) and Allison Altman (Irina) near the end of PRC’s production of THREE SISTERS by Anton Chekhov in a new version by Libby Appel. Photo: Jon Gardiner.