Seminar, currently on stage at PlayMakers Repertory Company (through Nov. 1), is not a Pulitzer Prize winner, but it is bitingly funny, as carried out by craft-master Ray Dooley and four of his students in the Professional Actor Training Program in the UNC-Chapel Hill Department of Dramatic Art. Anyone who has ever survived critiques in any art form will find it particularly so. In fact, Seminar seems to have been written for the academic setting–a broader audience might find it a bit tedious with in-jokes.

Theresa Rebeck‘s 2011 play about four striving young writers, and one older, in New York, is played snappily for its comedic and farcical qualities. On opening night, the ensemble sizzled, zipping from the mildly funny to the brutally hilarious to the mildly touching again and again. Under guest Michael Dove’s direction, Seminar is a lively entertainment, highly enjoyable, more than an exhaustive peeling back of creative psyches.

Yet it touches on something very important–how easy it is for a person to be damaged, even ruined, by a society that will punish him or her forever for a relatively minor error of judgement. This links Seminar with the last PRC production, Disgraced. Those who saw that production will also appreciate how effectively much of its set has been recycled here by Robin Vest (down to the figure of Shiva), yet made strikingly different with the use of a handsome suite of elegant mid-century modern furniture.

Ray Dooley plays Leonard, a famous writing teacher who takes only a few carefully chosen students, at an exorbitant price. Leonard exudes bitterness, it enters before him like a smell, and his gaze nearly incinerates those it focuses on. His persona is high-testosterone jerk. He comes to flay, to eviscerate, the hapless authors of unworthy wordsmithing, who he keeps off-balance by the undeniable truths mixed into his cruelty.

The four students of this group, all more or less known to each other beforehand, are meeting with Leonard for their seminar at the Upper West Side apartment of Kate, a well-to-do 20-something making the most of having been at Bennington, who is very well played by Carey Cox. In Kate’s rent-controlled apartment they will get to know each other, and themselves, much better. The others include Douglas, the appallingly stylish, name-dropping guy on a fast track because of his connections. Schuyler Scott Mastain excels, particularly in the moments of unguarded emotionality he slips into the comic routines. Allison Altman is a delight as the feckless, gorgeous Izzy, who’s all about sex and the pursuit of fame. And then there is Martin, a real writer. Myles Bullock gives a fine performance, with a wide and finely shaded emotional range, and his Martin gives the play a depth beneath the glossy comedy of sex and ambition. Writing’s not a joke to Martin, and it is up to Martin to pull the real lessons from Leonard–and give one in return.

The play’s final scene, between Martin and Leonard, in which each requires honesty of the other, and in which they reach a grudging trust, is most satisfying and most ambiguous. It’s possible, with Dooley looking so Mephistophelean, that a deal with the devil goes down. 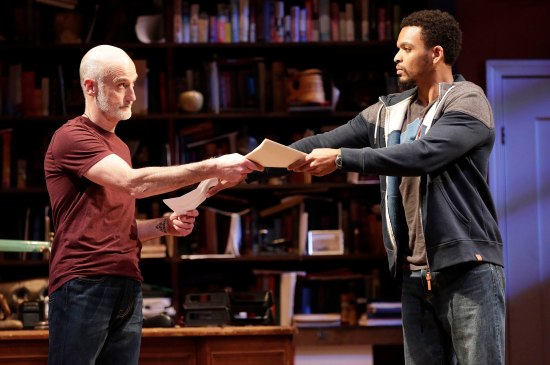 Following is my review of DISGRACED, published on cvnc.org. last month.

Disgraced: An American Tragedy at PRC

PlayMakers Repertory Company has opened its 2015-16 Mainstage season with an unusually powerful recent drama. Ayad Akhtar‘s Disgraced won the Pulitzer Prize for Drama in 2013; this season it is the most-produced play in the US, according to American Theatre Magazine. The play is of its time, certainly, and highly relevant because of its topic, but the deeper themes will serve to make it timeless. The PRC production, directed by Shishir Kurup, leaves you with much to think on — after you’ve gotten over the body-slam of its dilemmas and tragedies, and its astonishing array of insults.

There is not a good way to recap this play without making it sound slight, or giving away its many shattering twists. But briefly: Amir, a Pakistani-American and Muslim apostate, is a mergers and acquisitions attorney in New York who has labored with willing spirit for years in hopes of becoming a partner and seeing his own name alongside those of his Jewish colleagues in the company name. His wife, Emily, a white American, is a painter and advocate for Islamic culture. Their “friends” Isaac and Jory are, respectively, a Jewish-American art curator at the Whitney and a black American corporate attorney at the same firm as Amir. And then there’s Abe/Hussein, Amir’s nephew, a teenager actively searching for a viable self-identity as a brown person in post-9/11 USA. He is the instigating character who sets off the chain of events that leads to the devolution of the foursome’s relationship, and to Amir’s disgrace.

Along the way, playwright Akhtar skins and guts any number of social absurdities — his send up of the art curator is priceless — so that one laughs, even as the tension builds. You don’t have to know anything about the play to realize early on that something terrible is going to happen, that the veneers of civility will crack and peel away before you. (It reminds one of both God of Carnage and Who’s Afraid of Virginia Woolf in this way.) And from the first scene, you understand that Emily, with her cultural appropriation of Islamic forms and her incomplete understanding of Islamic culture, is going to unwittingly bring about the wreck. (Blessedly, Akhtar refrains from using the terms “cultural appropriation” and “cultural imperialism” even while scrutinizing the subjects.)

Shishir Kurup directs with extraordinary skill. He raises the intensity at such a gentle pace that you are in a state of twanging anxiety before you know how you got there, and still he leaves you unprepared for the blow-up. Rajesh Bose gave a heart-wringing performance as Amir. As his secrets and his rage were revealed and his behavior breached the bounds of the acceptable, he became more and more pitiable and lovable. His final scene amidst the wreckage of his life had a verisimilitude rarely seen on stage. He literally shrank into himself, imploded.

Nicole Gabriella Scipione was excellent as Emily, happily paddling on the surface of her easy beliefs, until she was sucked under in their riptide. Rasool Jahan was fantastic as Jory, cool as could be until an incident fanned the latent flame in her. Benjamin Curns, the only PRC/UNC cast member, played his pompous curator to a T. Samip Raval as the young nephew was very touching, but sometimes difficult to hear.

The scenic design by Nephelie Andonyadis is clean and informative, as is Geoff Korf’s lighting, which changes subtly with the changing tone of the proceedings. Bruno Louchouarn’s sound design is equally subtle and very affecting. Altogether, this was a tight production of an important play — one that successfully combines careful thinking with tragic drama.