July 18, 2015 By THE FIVE POINTS STAR in Theater reviews Tags: 10 x 10 in the Triangle, ArtsCenter Stage Leave a comment

I was late to the party on this year’s 10 x 10 in the Triangle–the 14th annual at the Carrboro ArtsCenter–but, WOW! These 10 plays, each 10 minutes long, by 10 authors, performed by 10 actors with 10 directors, add up to a major theatrical event. 10 x 10 has always been fun and intriguing, but this time, as well as comedy, there’s powerful drama from start to finish, much of it dealing with very inconvenient truths. The show repeats tonight and Sunday, and the 23-26.

The 10 plays were chosen from the 550 scripts that were submitted from around the world. They were winnowed out in a process led by ArtsCenter Stage Artistic Director Jeri Lynn Schulke, who produces this complicated festival. All the chosen plays are new to North Carolina, and two received their world premieres on July 10, when the show opened. Yes, more world premieres at the little theater that could, in the Paris of the Piedmont. The list of directors, actors and production designers includes many well-known names in local theatre, as well as some new talent. For more on all the participants, go here.

Racism, murder and corporate madness are the primary topics here, and, even though some of the stories are rich in dark humor, they as a group are only slightly leavened by tales of betrayals, break-ups and a charming meditation on free will and fate. Each of the scripts is so accomplished that none of the stories is uncomfortably fragmentary, and each feels as if time has stretched for it, to allow much more incident and detail than 10 minutes generally allows in life. If the production has a flaw, it is that the transition from play to play is so smooth and fast that there’s not quite time to catch one’s breath between the stories.

Barbette Hunter, Julie Oliver, and the “white chicken chili” of Alban’s Garden, in the ArtsCenter’s 14th 10 x 10 in the Triangle. Photo: Adam Graetz.

I was most affected by Alban’s Garden, by Rich Espey, with Barbette Hunter and Julie Oliver, directed by Brook North with cool lucidity;  Two Mothers at a Roadside Cafe, by Allan Bates, with Page Purgar, Barbette Hunter and Kala Hinnant, directed by Gregor McElvogue with powerful restraint; and the incendiary Stop/Frisk by Rich Rubin, with Alexander Jackson and John Allore, directed by Lormarev Jones with controlled rage. All of these plays involve murders, murders that have already occurred, or that will, or may, occur in the near future, or both. This is tough stuff. Although there’s a hint of possible reconciliation between injured parties in Two Mothers, none offers real hope of healing for our most desperate social malaises. The acting in all three is outstanding, but the delicacy with which Gregor McElvogue controls the timing in Two Mothers–making us wait and puzzle for long stretches–allows Hunter and Purgar to do particularly great work.

Page Purgar, Kala Hinnant and Barbette Hunter in Two Mothers at a Roadside Cafe, in the ArtsCenter’s 10 x 10 in the Triangle #14. Photo: Adam Graetz.

Fred Corlett gives three wonderful performances–as a put-upon long-married husband in the comic Couples Therapy (Meredith Sause, director); as the dignified teller of his journey to death in a Holocaust gas chamber, in As We Knew It (the wrenching lyricism of which is calmly unspooled by director Hope Alexander); and as The Narrator, in the stylishly philosophical The Third Person, directed by Jules Odendahl-James with the same verve she showed in her recent work at Manbites Dog. 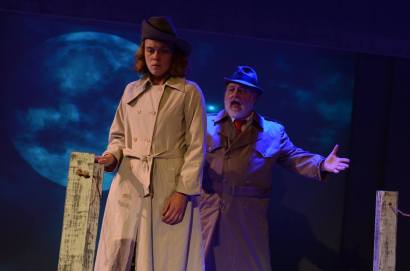 Leigha Vilen and Fred Corlett in The Third Person, at 10 x 10 in the Triangle #14. Photo: Adam Graetz.

In the last, Corlett plays opposite Leigha Vilen, who also lights up the biggest surprise of the evening. Jack Karp’s Brother, Can You Spare a Dime (world premiere), cleanly directed, with wit and sass, by Monet Marshall, excoriates the banking business’ subprime slime with a series of set-ups and jokes modeled on silent film’s antic miming. From the first title card to the final “Cut!” this satire is all complete. Vilen plays the Title Card Girl, as well as versions of a young woman who’s got “it” and knows how to use it. Lazarus Simmons is quite wonderful as the poor beggar and the poor fool taken in by the slick banker (John Allure in fake mustache glory). The visual storytelling is fantastic–I don’t want to give away the gags.

See it for yourself, and if you can find it in your wallet, drop something in the cup for the ArtsCenter’s Summer Challenge fundraiser. There’s nothing subprime about the ArtsCenter, but it does need help keeping on keeping on providing a home for high-quality theatre, year after year. Go here for tickets or call 919-929-2787.

Lazarus Simmons and John Allore mime it in Brother, Can you Spare a Dime? at the ArtsCenter’s 10 x 10 in the Triangle, 2015 edition. Photo: Adam Graetz.