Before I say anything else: If you didn’t see Monchichi, the utterly charming work by Company Wang Ramirez, on one of the first two nights of its three-night run in Reynolds Theater as ADF continues, stop reading and call for tickets right now (919-684-4444). Tonight, July 9, is its final performance.

Company Wang Ramirez in Monchichi. This sequence is as fluid as an ocean wave. Photo: Nika Kramer.

Sébastien Ramirez and Honji Wang together are Company Wang Ramirez, and this is their first appearance at the American Dance Festival with their “urban Tanztheater,” but I doubt it will be the last. The duet they dance here, Monchichi (2011) could make even the most boundary-bound, border-loving localist appreciate the positive aspects of globalization. The dancing is inventive and delightful; the talky element, pared of excess, makes its point finely; the music is cool and the lighting (Cyril Mulon) gets a big gold star. Unlike the new duets in the Dynamic Duos program, this work is fully developed and polished to a sheen.

Wang–a German born of Korean parents–and Ramirez–a Frenchman with Spanish parents–have in spades the very thing missing from most identity politics: humor! Monchichi mixes a flirtatious little drama of boy-girl pursuit, evasion and pairing, with very funny commentary (physical and verbal) on identities, both personal and national. Several languages are spoken. And did I mention the dancing? It is of the How did they DO that? variety.

In fact, the dancing would be enough, even without the superbly crafted theatrical elements. Ramirez is a self-taught hip-hop dancer; Wang’s background includes ballet and martial arts. They’ve blended these styles into something new, beautiful and refreshing. There’s no anger in the flashy, aggressive street-style moves, but all the snap you could ask for. The duo combines the clean, sharp angularity of various martial arts and of break dancing with the liquid flow of Tai Chi and graceful ballet into a series of slightly surreal skits with onstage costume changes, and the total package exhilarates the viewer. Oh, and there’s magic.

Monchichi begins by plunging the theater into moments of velvety darkness, before the curtain rises on Wang, minimally clothed, a dark silhouette against a barely-lit backdrop. That rich darkness tells you clearly that in a moment you will be imaginatively entering a different world. And although the performers eventually speak to the audience, they remain contained in their glowing stage-world. Slowly the lighting increases, and Ramirez is revealed lounging, shirtless and shoeless, behind the sole scenic item, a twiggy tree. We see the most of the gorgeous bodies in the first dance, but soon the costumes additions begin, as a pair of glittery high heels comes flying onstage. The costumes are part of the probing at identity, and they hardly obscure the dancers’ marvelous abilities, instead pointing up how diverse they are. And, thanks to the wonders of modern lighting, the tree also changes “costumes.” The ever-shifting conditions of the lighting make the commentary on the defined, if spiky, edges of identity and the edgelessness of earth-space even more interesting. All together, Monchichi is amazing, and deserving of the prolonged standing ovation (four bows!) it received on the 8th. 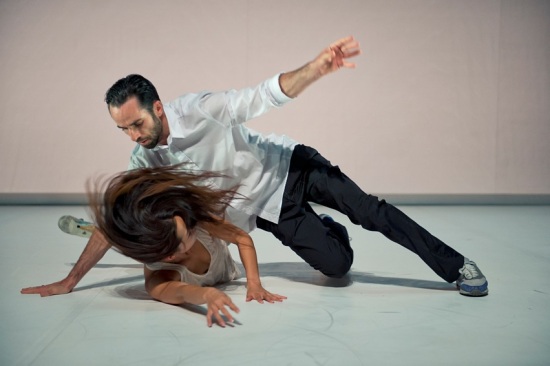 Honji Wang and Sébastien Ramirez have some incredible over and under moves in Monchichi. Photo: Nika Kramer.