The Martha Graham Dance Company gave a thrilling performance last night at Carolina Performing Arts. The program repeats tonight, 4/15/15. Dance fans will hate themselves in the morning if they miss the program’s final work, Echo.

Once Miss Graham died in 1991, there was a certain amount of dithering around about how her company would continue. When Janet Eilber, a former principal dancer with Graham, became the company artistic director in 2005, she continued to preserve and reconstruct Graham’s work, but also, as she said from the stage on the 14th, “to commission new work that resonates with Martha Graham’s legacy.” In 2014, the company premiered such a work by Greek dancer and choreographer Andonis Foniadakis. 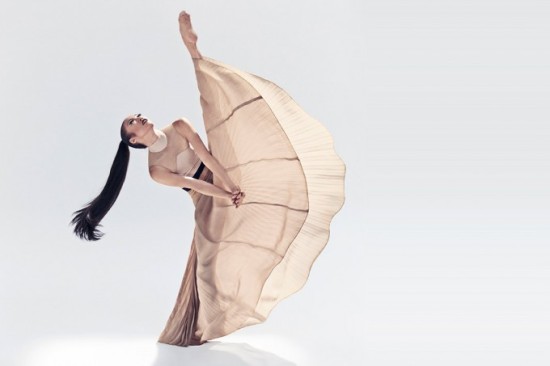 His Echo, based loosely on the myth of Narcissus and Echo, is the most erotic, passionately charged dance I’ve seen in many a year. Danced by Lloyd Mayor as Narcissus and Lloyd Knight as his powerfully attractive reflection, and the ravishing PeiJu Chien-Pott as the nymph Echo, plus an ensemble of seven, this piece alone is worth the ticket. The mythic theme, the sexuality, the entrancing, propulsive music by Julien Tarride, the fabulous skirted costumes by Anastasios Sofroniou and the magical scenic and lighting design by Clifton Taylor are all highly resonant with Graham’s work. The dancing was big and precise at once, with lots of reversals of direction that let the costumes unfurl into fluid shapes, and some blink-inducing lifts and unusual intertwinings.  Although I thought the piece could have been edited to lose the final coda and end on a particularly astounding image, Echo is an astonishing dance, and does so well the aesthetic work that only dance can do. There’s some good video on the choregrapher’s site.

Narcissus and his double in Echo. Photo: courtesy MGDC/CPA.

The program also includes works commissioned by Carolina Performing Arts. This concert features three new Variations on Graham’s famous Lamentation, one by Chapel Hill native tap artist Michelle Dorrance. It was curious to hear percussive hard-shod foot music as an accompaniment to, rather than a result of the dancing, and to see how Dorrance attempted to fuse her kinetic style with the Graham technique. Not altogether great, but it looks like there’s territory to explore here. The Gerring Variation is more in the Merce Cunningham tradition, and was a solid piece, and the Tayeh Variation was pretty exciting. I still like Miss Graham’s original best: a film of her dancing it precedes the new Variations (of which there are now 12 total, created since 2007).

The program’s first act includes Nacho Duato’s Rust, which CPA commissioned for the Graham company and which premiered in Memorial Hall April 26, 2013. It’s still ferocious, it’s still about torture. It still needs to be seen, and seen again.

It followed on the heels of Steps in the Street, a suite from Graham’s 1936 Chronicle, another overtly political dance. Sadly, the politics of the 2010s bear a strong resemblance to those of the 1930s, and keep this work as timely as Rust. The dancing was very fine last night, with all ten women in lockstep to Wallingford Riegger’s martial music. In long black dresses, moving backwards, clutching themselves, looking over their shoulders, they communicate a chill danger. Triangle dance fans will remember seeing it on the same 2008 ADF program with Lamentation.

The program is leavened by an absurdist dance-theater piece by Annie-B Parson and Paul Lazar of the marvelous Big Dance Theater. According to MGDC’s Janet Eilber, The Snow Falls in the Winter, which the Graham company premiered in New York in February of this year, was inspired by a Eugene Ionesco play, but, she said, Annie-B told her that “the play was awful,” and that she threw out the plot. “So don’t look for one,” Eilber cautioned the crowd. You couldn’t have found one if you were looking. But the series of shifting scenes and ridiculous goings-on had me giggling aloud. I didn’t even mind that there were microphones, and talking. Effervescent was the non-sense.