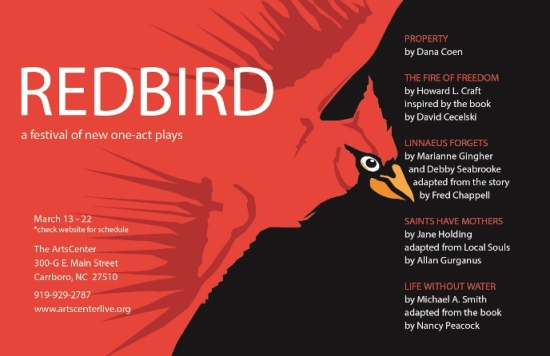 Two years ago, Dorrie Casey, who’s done pretty much everything else in theatre, decided her next adventure would be a festival of new plays. Add producer to her credits, please, because starting tonight, five new plays by North Carolinians will debut at the Carrboro ArtsCenter. Heavily underwritten by Casey and produced by her and Jeri Lynn Schulke, the artistic director of ArtsCenter Stage, REDBIRD promises to be as showy as its name, with the five works premiering over two opening nights. It’s a significant milestone for non-university theatre here.

Tonight’s first first night will include Michael A. Smith’s adaptation of Nancy Peacock‘s first novel, Life Without Water. Peacock is my contemporary (Chapel Hill High School Class of 1972) and the world she imagined in her book resonated strongly with me–and with Tom Marriott, who directs. He too has lived without water. “The play is very, very moving for me,” he said, “and to have Marcia Edmundson and Jane Allen Wilson—!” Here he threw up his hands and grinned with the delight of working with these two splendid women. Marriott’s been making theatre in the Triangle area since 1969, “poor theatre,” as he says, and has been a crucial instigator in the birth and growth of the “not-PlayMakers theatre scene” currently thriving here. This is an ideal situation for the birth of a new play: everyone involved knows everyone else’s art and can also bring intensely local knowledge to this work. The newest member of the team is Joseph Amodei, who’s doing the multimedia. The photographer Catharine Carter is another longtime Chatham County person, and for the backdrop imagery she has photographed the house Nancy Peacock lived in back in the day.

Also on tonight’s bill is the ineffable Jane Holding, who has adapted a story from her friend Allan Gurganus’s recent Local Souls. Holding and Gurganus have been friends since 1969, and share similar eastern North Carolina backgrounds. Part of their friendship involves reading to each other, so Holding knew Gurganus’ characters and their stories long before the book was published, and knows their language and their rhythms deep in her soul (Holding collaborated with Gurganus on the stage adaptation of his Oldest Living Confederate Widow Tells All). Holding will embody Jean, mother of Caitlin, for whom Jean put herself in the background. But in Saints Have Mothers,  Jean’s back up front. Holding has told me that this story was important to her, as “more than anything, I wanted to be a good mother.” The insightful Tamara Kissane directs. Of course, Holding and Kissane have previous theatre connections, too–Kissane played Holding’s daughter in Little Green Pig’s fantastic all-female Richie.

Just to prove that ALL the excellent writers in the state do not live in the Triangle, Greensboro will be well-represented in the third piece on tonight’s bill, Linnaeus Forgets. The short story’s by my hero Fred Chappell; the adaptation by Marianne Gingher and Debby Seabrooke. Lenore Field, Greg Hohn, who also directs, and the indefatigueable Tom Marriott will act (and waltz), and Jimmy Magoo will handle the puppets.

On the 14th, the second opening night will feature another new work by Howard L. Craft, whose Freight was such a smashing success in January (it will receive a New York production this summer). Craft has adapted from historian David Cecelski’s book for The Fire of Freedom, and the character Abraham Galloway will be played by Jade Arnold. Chaunesti Webb directs.

The REDBIRD’S fifth work is Property, by Dana Coen, director of the UNC-CH Writing for the Stage and Screen program, and examines outsiders’ and locals’ relationships with the land and “sustainability.” Coen directs Alex Thompson, Melanie Rio and Brandon Rafalson.

REDBIRD has a design team, too, studded with well-known local names. The whole damn shebang is stage-managed by the amazing Emma Nadeau. “She’s the hub of the spinning wheel,” said Jeri Lynn Schulke. Maybe if we stomp our feet, she’ll come out at the end with her accordion.

REDBIRD runs two weekends only! with the shows in rolling repertory. Check http://www.artscenterlive.org for which is when, and get your tickets.