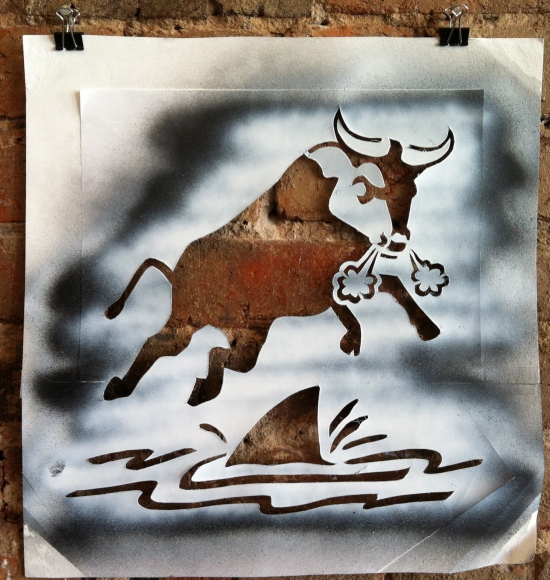 Stencil for the Bull Jumping Shark tag that’s showing up on the hoardings of various high-dollar developments in Durham, perhaps as a warning. Anonymous.

The Carrack Modern Art Gallery, should you have never ventured the stairs leading up from the bakery at 111 West Parrish Street in downtown Durham, is an unusual place. It’s a zero-commission gallery, which means that if an artwork sells, the artist gets all the money. It also means that the gallery runs on grants, donations and labors of love–and the labor is not inconsequential. Shows at the Carrack turn over every two weeks. The current show, Loaded Objects, up through this weekend only, has been curated by Chris Vitiello as part of his omnivorous love of the arts. Vitiello (who is currently visual art reporter and critic for IndyWeek) has a wide-ranging mind and a sensitive eye, the nerve path of which seems to be routed through his heart. 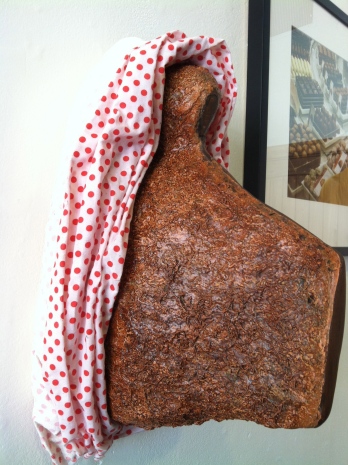 Plaything, mixed media, including breakfast cereal, by Cody Platt, with a Jim Lee photograph in the background.

By this I mean he feels what he sees, and makes astute connections between images and ideas, weaving those connecting points together in webs of words. He has chosen objects and images that link for him under the rubric of “utility.” Vitiello is also a poet (and appears frequently as the notorious Poetry Fox, to be found pounding out poems on demand on a classy old manual typewriter in unlikely locations around town), and to follow his logic requires the viewer to open the sluice gates on her own poetic imagination, even though Vitiello has written cogent (and sometimes hortatory) wall texts to accompany the artworks.

All significant artwork could be described as “loaded.” Its power lies in communicating things for which beloved language is inadequate. In this gallery full of extremely different works, Vitiello seems to have put together a kind of free-verse praise song lauding the wondrous variety of things and images that can stop us in our tracks with their bullets of truth. His taste is catholic as to media and subject, but he has a strong bias toward the well-made, which helps the viewer feel the connections as the eye moves among the objects.

There aren’t many paintings in the show, but two paintings by Bonnie Melton could constitute a show in themselves.  A photograph can only suggest the prickly, passionate beauty of her painted surfaces, with their signifying shapes and vibrating color interactions. 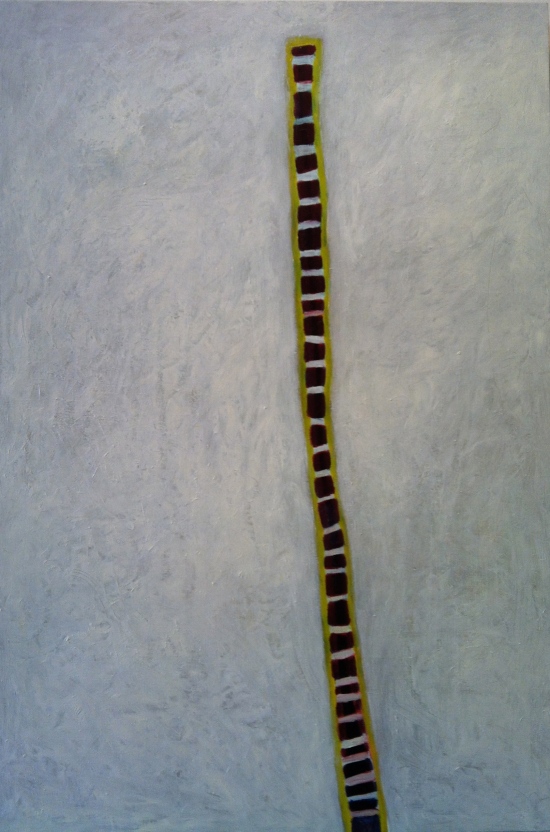 Once you can tear your eyes away from Melton’s work, it is not difficult to hopscotch to the next texture, the next message. You may end up feeling like St. Sebastian, though, shot full of arrows, art arrows.

Curator Vitiello and some of the exhibition artists will talk about the work in the gallery, 7:30 p.m. 10/23. Free. 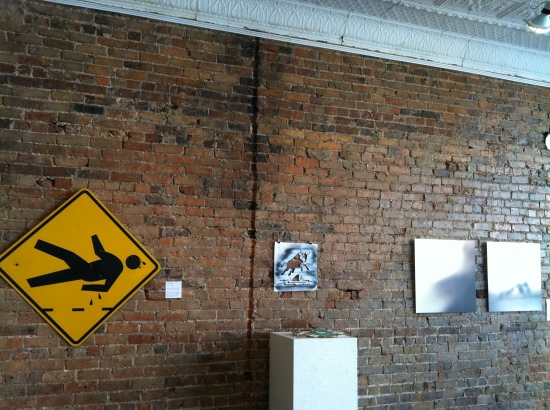