Since 1985, I’ve looked and looked in Spartanburg, SC for something interesting to do while visiting my in-laws (admittedly, I’m usually there on holidays). Finally on May 30, 2014, I found it–in the HUB-BUB Showroom, where Treefalls Music presented ONe, the organization’s first new music concert, featuring 21st century music by local composers as well as some from as far away as Texas or Rhode Island, in the convivial gallery/event/confabulation space in a former Nash automobile showroom downtown.

The event also featured Hillsborough, North Carolina poet Jeffery Beam reading his beautiful 2003 poem “An Invocation,”  which spreads his love and acute observation of nature over your mind like an embroidered cloak. If you have heard Beam read, you know how entrancing he can be voicing his own incantatory words.  He was in Spartanburg to read his poem prior to a quartet playing music inspired by it and named for it, by composer Steven Serpa. The two had spoken and corresponded, but never met until the concert evening. Fortunately, they hit it off. And Serpa’s music is fully worthy of Beam’s words: “thorn & bright needle/light darting through us….golden coagulate bomb/no petulant view…” 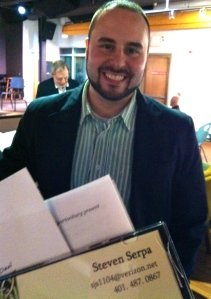 Composer Steven Serpa, prior to the Treefalls One concert in The HUB-BUB Showroom, Spartanburg, SC.

Before the concert, I asked Serpa who he’d name as giants among contemporary composers, and he replied, “Barber.” Samuel Barber’s not with us any longer, but his influence can be clearly heard in Serpa’s lush lyricism. His “An Invocation” had been written for oboe and strings, but was played on the 30th by soprano saxophone and strings–something even Serpa had not heard before. It was splendid that way, and quite different in emotional tone from the oboe version on Serpa’s self-produced CD (which is gorgeous all the way through, and worth seeking out).

Ian Jeffress, now on faculty at Western Carolina, explored the reaches of emotion in the poem and the score with his gleaming saxophone, while Mary Irwin, violin, John Ravnan, viola, and Ruth Berry, cello, created the ground tapestry, the tree lines, the rustling vegetation and soaring sky. They played the lovely music beautifully, although the strings could have used a little more volume with the saxophone (as opposed to the oboe), and the final pizzicato notes were a bit piano to make the closing seem conclusive. The piece received an enthusiastic response, and afterwards, violinist Mary Irwin asked Serpa whether he might be willing to compose three more movements. That’s success. 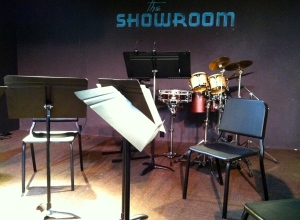 The Treefalls program was put together by Spartanburg composer and musician Peter B. Kay, drawing on his many local, regional and national contacts among composers and concert musicians. Kay himself is a bassist, but his piece on the program, “the Sea,” was scored for two cellos and recorded electronic sound. The cello parts, played by Brenda Leonard and Ben Smith (Cello Times Two), were ravishing, but I was unable to connect them to the plinking electronic sounds.

D. Edward Davis, a Ph.D. student in composition at Duke University, also used electronica to little effect in his “blackbirds.” The live instrument was a bass, played by Brian Gencarelli. I was unable to determine the relationship of the music to the song of the red-winged blackbird.

Petrea Warneck, oboist (L) and Ian Jeffress, saxophonist, during intermission at Treefalls ONe. 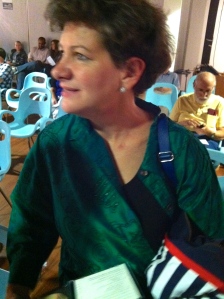 Petrea Warneck, oboist, had commissioned a two-part work from composer Mark Kilstofte, in memory of her mentor. “Inner Voices” was a little too mathematical for me, but at the concert’s end, Warneck joined her oboe with flute, viola, bass and percussion in John Valerio’s “Synthetic Dances.” Her tone was swooningly beautiful in the three lively sections that brought a satisfying evening to a happy close.

Composer Steven Serpa with poet Jeffery Beam after their successful joint presentation of a poem and the music it inspired. May 30, 2014, at The Showroom, HUB-BUB, Spartanburg, SC.