The first time I saw Cloud Gate Dance Theatre of Taiwan was in the 1990s, when the American Dance Festival presented founder and choreographer Lin Hwai-min’s Songs of the Wanderers (1994) in Page Auditorium. This visually spectacular 90-minute meditation on spiritual questing, bodily joy and suffering, stillness and transformation, is one of those rare artworks that live on in one’s soul, sending up vividly remembered sequences through the murk of consciousness as one continues one’s own journey. It is the kind of thing that you leave the theater feeling profoundly grateful to have experienced. To have had the opportunity to see it again–it was like winning the lottery. The odds were against it. But on April 2, Carolina Performing Arts gave us old-timers the big prize of a second chance, while introducing hundreds more to this beautiful dance. In addition to adding another star to CPA’s crown of achievements, the successful return of this hugely-scaled and hugely expensive performance to this area speaks clearly of the growing audience here for dance-theatre of the highest caliber. Memorial Hall sold out. 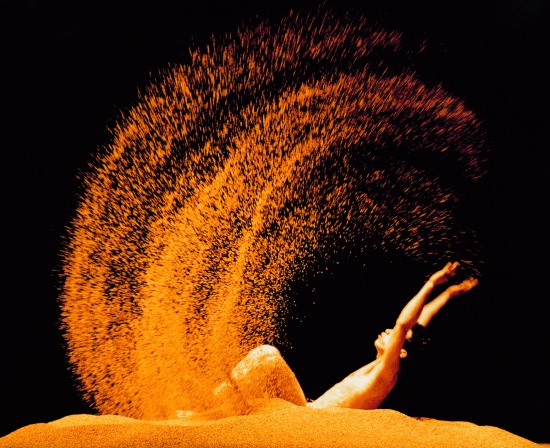 An instant from Songs of the Wanderers, by Cloud Gate Dance Theatre of Taiwan. Photo courtesy Carolina Performing Arts.

Inspired by the life of the Buddha, and its telling in Herman Hesse’s Siddhartha, as well as Lin Hwai-min’s own instinctive and cultivated understanding of movement’s necessity to the body and the soul, Songs of the Wanderers takes us on the journey of Life, signified by the 3 and one-half tons of golden rice that rains onto the stage, some of it falling onto the head of a monk who remains motionless under its fall as it piles up to his knees. The dance is full of struggle and surprise, unrestrained sensuality, and reverence. Order meshes with chaos. Golden light stabs across the patterns, and carves through the velvet dark revealing groups of bodies in new actions and arrangements. The dancers of Cloud Gate are among the most controlled and sinuous in the world, and can move slowly or with explosive speed through a lyric of motion where rigid angles are made to rhyme with fluid curves, and delicate flutters embellish large actions. Here they move to chanted Georgian folk songs. Although that looks odd in print, the combination is excellent in action. Lin Hwai-min’s multiculturalism is the real thing.

After the dance culminates with a ritual involving bowls of fire, veiled women and ecstatic whirling, and the dancers have left the stage, another dancer who has come and gone through the rice with his huge long-handled rake returns to form the rice into a spiral covering the stage, as if he were grooming a golden Zen garden. As engrossing and absorbing and thrilling as the ensemble dancing is, this focused act takes you another step towards nirvana, and its resulting beauteous form releases something in the chest, some block to joy. You breathe deeply, and smell the rice, raised up in golden ridges–here for but a moment, here forever.

My June 2003 review of Cloud Gate at ADF

My September, 2007 review of Cloud Gate at Carolina Performing Arts

My October, 2011 review of Cloud Gate at Carolina Performing Arts

My July, 2013 post on Lin Hwai-min accepting ADF’s Scripps Award, with comments on the dance that followed