Looks innocent, doesn’t he? But Chris Thile is a dervish, a MacArthur Genius Grant-winning musical dervish, and on the “29th day of Oktoberfest, 2013, ” he whirled onto the Memorial Hall stage with his mandolin, and the two of them alone wound and skirmished through some memorable music in this Carolina Performing Arts presentation. 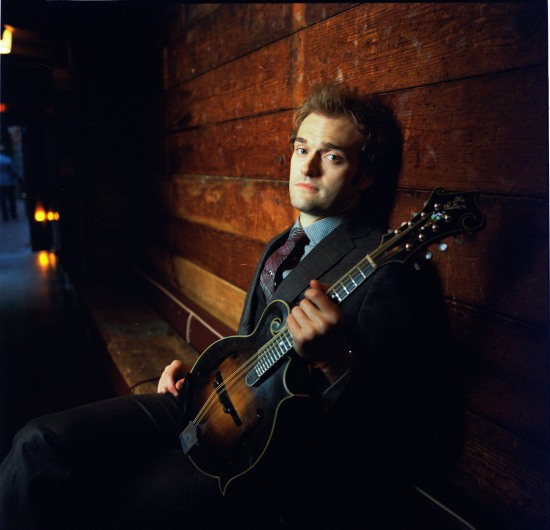 Many know Thile from the progressive bluegrass quintet, The Punch Brothers, or from his earlier bands, Nickel Creek and Mutual Admiration Society. A different set may know his music from his work with bassist Edgar Meyer, and his later collaboration with Meyer, Yo-Yo Ma and Stuart Duncan on The Goat Rodeo Sessions. But earlier this year, Thile put out a solo album for Nonesuch, Bach: Sonatas and Partitas, Vol. 1. Solo mandolin. The recording includes Sonata No. 1 in G Minor, Sonata No. 2 in A Minor, and Partita No. 1 in B Minor (read Alex Wilkinson’s New Yorker review here); the concert, which Thile had performed earlier in the week in New York’s Zankel Hall (New York Times review here), included the G Minor Sonata, in parts, and the B Minor Partita, uninterrupted, interspersed with a crazy-wide range of other music.

I had mixed feelings about the concert. On the one hand, it was great fun and pretty awesome to see and hear such range in one musician. No matter what he played: Bach, Louvin Brothers, his own compositions, Fiona Apple, traditional tunes–all received the same level of engagement and amazing technique. On the other hand, the construct seemed a bit labored, and some of the transitions gave me whiplash. I had a pretty hard time going from the Adagio of the G Minor Sonata straight to the Louvin Brothers’ “Broadminded (is spelled S-I-N),” but no trouble at all going from the sublime Partita straight to Thile’s own song, “If You’re Gonna Leave Me, Set Me Up With One of Your Friends,” with nothing in between but Thile’s breathless comment on the Bach: “That’s a helluva kick-ass piece of music right there!”

He kicked its ass right back. B Minor on the mandolin is not high, but it’s lonesome, and full of feeling. And of course, the music made by the mandolin sounds so very different from that made on a violin. This sounded more like a lute that had bred with a harpsichord. (Read Alex Wilkinson’s piece for a clear explanation of how Thile gets his sound, so different from Bill Monroe’s, or anyone else’s.) It was completely engrossing–you hear the patterns in the music very differently with each note being picked out separately, rather than gliding together under the bow.

The various piece of the G Minor Sonata sounded good–but it was sort of a tease, not playing them together. Maybe it was a lesson in putting each piece of the disparate music on equal terms. However…that Presto he played at the end was so zingy I may have to get the CD, which comes with MP3 download. For the new old-fashioned crowd, the album is also available on vinyl.