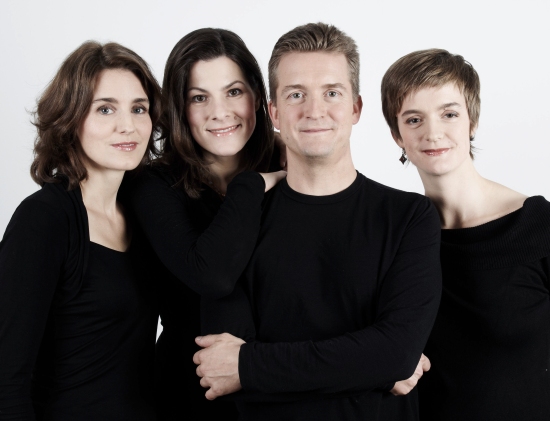 It’s easy to decide to go a concert when you already know and love the music that will be played, but how much more rewarding it is to become smitten with music you doubted you’d even like. I went to hear the brilliant Tetzlaff Quartet (Christian Tetzlaff, violin; Elisabeth Kufferath, violin; Hanna Weinmeister, viola, and Tanja Tetzlaff, cello) play Beethoven; I came away with a newfound interest in the very different music of Alban Berg.

The Tetzlaff Quartet performance in Baldwin Auditorium October 19 was the second in this season’s Chamber Arts series of Duke Performances, but the first concert I’d been able to attend in the newly renovated hall. The pieces played by this virtuosic quartet of German and Austrian musicians (who come together several times a year to perform in some of the world’s finest concert halls) highlighted the acoustic qualities of the new Baldwin. The Berg work, in particular, would not have been the ravishing thing it was in Reynolds Theater.

Portrait of Alban Berg by Arnold Schoenberg, 1910; in the collection of the Vienna Museum.
Credit: Art Media/Heritage-Images

Alban Berg was a student of Arnold Schoenberg’s in Vienna early in the 20th century, along with Anton Webern. Together they formed a new Viennese school of music, a foray into the new analogous to the new visual art of the Vienna Secession. It turns out that Schoenberg had a foot in both camps, a piece of knowledge that came my way recently when I visited “Facing the Modern: The Portrait in Vienna 1900,” at the National Gallery, London. The show included several portraits by Schoenberg, the earlier of which were quite dreadful. Not having any commissions, he wrangled sitters from his family and friends. Fortunately, by the time he painted this portrait of his 25-year-old student, he had acquired a modicum of technique.

Berg began to write his Lyric Suite, performed so touchingly by the Tetzlaff, in 1925. It seems that he fell in love with a woman not his wife in that year, and the Lyric Suite is a passionate coded declaration of love for this woman. It combines Schoenbergian theory with Mahlerian, even Wagnerian, romanticism with extraordinary eloquence, grasping the soul while titillating the intellect.

The work has six sections; the sounds in one feed the sounds in the next, until it circles back around. Many of these sounds are very delicate, as light as insect wings brushing a screen before vanishing like a breath, but as a whole the work is robust, sinuous, replete with human emotion. The quartet made a great wholeness out of the crystalline notes, communicating tenderness, passion and a brilliant self-awareness that eschewed sentimentality.

The concert opened with Haydn’s String Quartet in C Major, op. 20, no. 2, a very pretty thing with all the instruments “talking” to each other and motifs racing and chasing each other in the final movement. This quartet is considered the first real string quartet–in its time it was modern–and it made a clever prelude for the Berg Lyric Suite. Following intermission, the players went back a little in time to the timeless Beethoven (whose death mask I’d just seen in the London show, along with drawings made of his hands as he lay dying in 1827–the face was much diminished, but the hands were large and powerful).

The Tetzlaff played one of the late quartets, No. 15 in A Minor, op. 132, from 1825, giving the audience a chance to think back to last year’s concert in Reynolds by the Belcea Quartet, who played op. 130, including the Grosse Fugue, and op. 131, and to contrast the acoustics of the halls and the styles and tones of the two quite different musical quartets, as well as the music itself.

No. 15 in A Minor, op. 132 has five movements, and its opening includes a theme that appears in both the Grosse Fugue and op. 131, but as played by the Tetzlaff, it conveys very different emotions. The Tetzlaff mysteriously combines the robust and earthy with a limpid ethereality that evokes the eternal return. Their playing is so clean and clear that it runs over you like spring water as the feelings run through you: an untormented acceptance of fate, of death; the piquant clarity of vision accompanying reprieve and new strength; the tremendous emotion at the awareness of blood coursing in and out of your heart; the joy of the great dance of life, everlasting.