I fell for fado when I visited Portugal nearly 14 years ago. I went after the Lisboa Olympics, and before Portugal went on the euro and was still very affordable–and before fado had become a world music sensation. This very Portuguese music is in some ways similar to the blues–melancholy and capable of accommodating many lyrics within simple musical structures–and to the smoky sounds of flamenco. This latter characteristic comes from the Moorish music that informed fado as it developed in the 19th century, in the ancient Moorish quarter of Lisboa, the Alfama. Traditional fado uses a small group of instruments and a vocalist–the Portuguese guitar, with its 12 ringing strings; a bass guitar, and perhaps a six-string guitar. The sound of its musical poetry is  very intimate. Many of Portugal’s poets have written for the form, or their poems have been adapted by singers to the format. 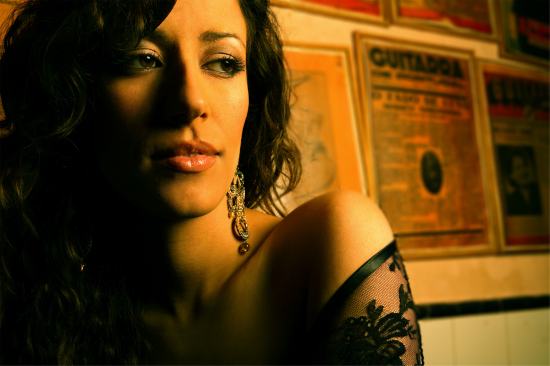 In this century, fado has begun to push out from its simple form. Young singers like Mariza made it into a flashy show–very fun, but not very satisfying. But another young singer found a truer path. Ana Moura, brought to Durham’s Carolina Theatre on March 29 by Duke Performances, began as a traditionalist. Her voice is low, husky, sensuous, and she cites the greatest of fado singers, Amalia Rodriguez, as her inspiration. Yet Moura has increasingly experimented with other musical forms, other languages–but she imbues them with the spirit and sound of fado. On the 29th, she performed a number of songs from her new CD, Desfado, and all were fado, even if they began as something else.

The best example is Moura’s version of Joni Mitchell’s A Case of You. I’ve never before heard anyone other than Joni sing Joni’s songs that I thought was worthy. (Judy Collins–no.) But Ana Moura got right to the soul of the song, “so bitter and so sweet.” She  can’t go to the high notes, but that is OK, it’s beautiful, it’s right, it’s in her blood “like holy wine.”

I don’t know enough Portuguese to do more than pick out a few key words, but it doesn’t matter. I’ve told people before that listening to fado is like listening to Nina Simone sing in Portuguese. In some ways the words simply provide shapes for the feelings, the deep emotions, which are revealed by the sounds and textures of the voice.  Moura’s band could hardly be separated from her singing. They form a very tight unit, especially the core players Ângelo Freire on the Portuguese guitar, Pedro Marreiros on acoustic six sstring guitar, and André Moreira on acoustic bass. Freire could blister that instrument, which looks somewhat like an overgrown mandolin. I kept imagining him showing up at Merlefest and astonishing the old-time crowd. The more contemporary songs require key boards and drums, which were played with both verve and reserve by João Gomes and Mário Costa, respectively.

Moura is a big international star now, accustomed to playing large theaters and huge stadium venues. She’s well into a worldwide tour in support of Desfado. But her show in the modestly-sized Carolina was beautifully mounted (wonderful lighting) and she was warm, gracious and unhurried, treating the adoring crowd to kind words, modest bows and a sweet encore. I think everyone there was already a fan. If by chance you are unacquainted with her music, start with her website, where there are several videos, or the interview with video clips on DP’s The Thread blogsite. Youtube is replete with videos, bootleg and not, including her singing in Lisboa’s enormous stadium with The Rolling Stones on No Expectations. Mick looks a little stunned when her voice swells out…and the crowd was in her hand, just as if she had them all in a tiny club.  A case of her is just not enough.