The Small Maidens in Red from The Joffrey Ballet’s The Rite of Spring. Photo: Herbert Migdoll.

Chicago’s sleek company, The Joffrey Ballet, made a two-night appearance in Chapel Hill March 23 and 24, as Carolina Performing Arts‘ super-season culminates with a string of powerful performers. The big draw was the reconstruction of Nijinsky’s 1913 choreography and Nicholas Roerich’s sets and costumes for Igor Stravinsky’s The Rite of Spring, but the Joffrey also performed two other pieces each night. It was very satisfying to finally get to see this famous dance, even if perhaps 20% of the Hodson/Archer reconstruction is their work, and not the original artists’. The experience was made even richer by CPA’s free “Program Notes Live” talks by Millicent Hodson and Kenneth Archer preceding each night’s concert. These scholars–the dance detectives–have spent years searching out and poring over every clue about the lost ballet, and even a thimbleful of their knowledge and insight into the work provoked a much greater understanding of its complexity and layers of symbol and meaning. This is exactly why I must live around universities–they give this great stuff away to any one who wants to soak it up!

I reviewed the first night for CVNC.org. Read  “The Shock of the Beautiful, The Thrill of the Old: The Joffrey Ballet at Carolina” here, but first look at these pictures. The first night’s two non-RITE pieces were fantastic. I love John Adams’ music, and Stanton Welch’s choreography, so Son of Chamber Symphony was right up my street, with its completely contemporary attitude. The dancing was glorious, but whatever they had danced, if they had been wearing these costumes by Travis Halsey, I would have been captivated. The men wore forest-green unitards, scooped below the nipples in front and “laced” in back like corsets.

Christine Rocas & Joanna Wozniak of the Joffrey in Son of Chamber Symphony. Photo by Christ.

The second dance, After the Rain, by Christopher Wheeldon, was just one of the most beautiful things I’ve seen lately. The music was Arvo Part, but I could hear Rickie Lee Jones singing in my head, “Spring Can Really Hang You Up the Most.” Here’s a glimpse. 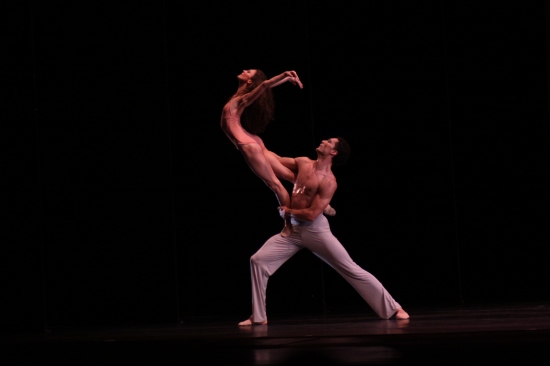 One of a cascade of beautiful moments in The Joffrey’s After the Rain. Photo: Herbert Migdoll.

The second night, the company danced Edwaard Liang’s The Age of Innocence. I have a hard time with this piece, because it purports to be inspired by the novels of Jane Austen. I am an Austen fanatic, and I just can’t see it. Seems a lot more Gilded Age/Edith Wharton to me.  I saw The Joffrey perform in the Kennedy Center’s Ballet Across America series three years ago (see review here). It was much more splendid in Memorial Hall, with grand red drapes for the backdrop, and wonderful lighting. As you can see below, there are some very heated moments in the duets, which contrast deliciously with a stylized 19th century formality in the group dance–a formality that suits the Philip Glass music. Christine Rocas and Ogulcan Borova were devastating in the “Obey Thee” section, and the “First Dialogue,” with Jeraldine Mendoza and Mauro Villanueva were also very fine. 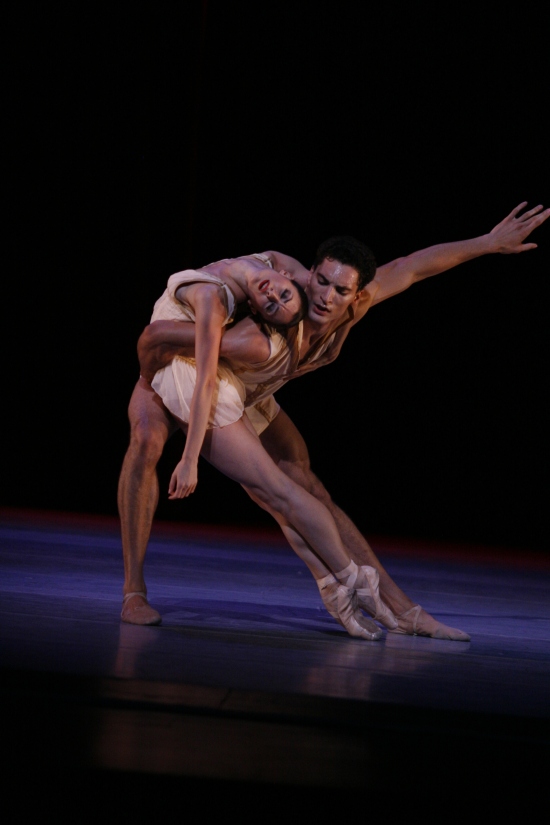 More Wharton than Austen: The Joffrey dancers in The Age of Innocence. Photo: Herbert Migdoll.

Oddly, the William Forsythe work, In the Middle, Somewhat Elevated, one of his better known pieces, was a bit lackluster. It was all very well done…but it just didn’t have the jolt it needed. Maybe the dancers were saving themselves a little for The Rite, still to come. 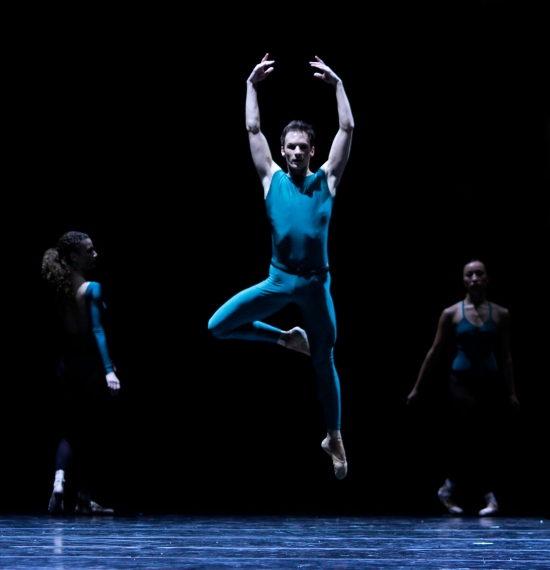 Seeing The Rite again so soon was revelatory. It is so dense that it just cannot be taken in all at once. Having just heard an hour’s slide-talk on the symbolism in the visual design, I could see much better how important it was to creating the sense of ritual, even though, from the audience, one cannot really make out all the detail. A lot of people scoffed at the idea of an entire performance season revolving around The Rite, but so far I’ve learned a lot–enough to know that I barely know anything. And I’m not tired of the music yet.

The Joffrey Ballet, from the reconstructed ballet, The Rite of Spring. Note the way that even the underarm gussets contribute to the symbolic decorative scheme. Photo: Herbert Migdoll.