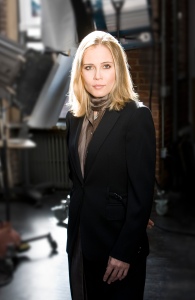 I went for the John Adams, but came away with a new appreciation for Robert Schumann. In a variation on its piano recital format, Duke Performances presented the powerful violinist Leila Josefowicz with pianist John Novacek in Reynolds Theater on March 8, playing a mixed program tinged with blue.

After opening with a boisterous bit of Brahms (Scherzo in C minor, “Sonatensatz,” from the Sonata FAE, Brahms’ contribution to the work written with Robert Schumann and Albert Dietrich as a gift to their friend, Joseph Joachim), Josefowicz and Novacek launched into Robert Schumann’s heart-gripping Violin Sonata No. 1 in A minor, Op. 105. Its three movements cover a lot of emotional territory. Although there is a lot of sparkle, especially in the second movement, the Allegretto, there is also a lot of agitated feeling throughout. The colors were those of summer thunderstorms, blue-gray, blue-black, steel-blue, tossed and heaved through glints of heavy yellow light. Schumann wrote this tight Romantic work in a matter of days in 1851, but I think that if Delta bluesman Robert Johnson had heard it 85 years later, he would have appreciated its fierce, combative melancholy.

Josefowicz is exciting to watch: she stands like warrior, alert, prepared to lunge. And she does lunge into the music as if to apprehend it at bow-point, her platform sandals peeping out from the hem of her exotic flowing gown. But mostly she faces it four-square, vertebrae stacked, solor plexus open, shoulders down, the curves and rippling muscles of her bow arm a counterpoise to the 1724 Del Gesu violin in her other hand. There is nothing willowy or wistful about her. I’d dearly love to see her onstage with the ferocious cellist Maya Beiser. There would probably be spontaneous combustion.

After intermission, we moved into the 20th century, with a delightful performance of Manuel de Falla’s Suite populaire espagnole for Violin and Piano (arr. Paul Kochanski, who added very effective bits of pizzicato to mimic castanets). Some of these songs, especially “El paño moruno” and “Polo” are rich in blues, these dark as indigo. This was followed by the crisp, concentrated sound poems of György Kurtág’s Tre Pezzi per violin e pianoforte (Op. 14c), the first of which is “desolate and sad.” All three pieces were spare, unornamented, making a refreshing contrast to the heated arabesques of the de Falla.

OK, so much for the blues, let’s get on with the swing. John Adams’ Road Movies (1995) has a marvelous amount of swing for minimalist art music. Josefowicz has played and recorded a lot of Adams, and her muscular approach must surely please the composer. Adams’ music elicits landscape imagery in my brain–big brawny landscapes, rocky, windy, with rushing water, and this piece takes one on a journey through such territory. I especially like the last movement on which pianist Novacek demonstrated that he’s got that thing: “‘40% Swing.'” It feels like you are in a 4-wheel drive vehicle going where you hadn’t ought to be, ending up at the bottom of a ravine with your oil pan smashed on a rock and you just don’t care because both the ride down and the view upward are so worth it.