It is always a special treat to see theater work made by talented, skilled artists who have generated their synergy not in just this production, but in many plays over years, even decades. In the current show at Manbites Dog Theater, director Jeff Storer leads a dream cast of well-known and much-admired area actors in Irish playwright Enda Walsh’s The New Electric Ballroom (2005). It’s an ideal play for Storer: It requires a tight ensemble of actors; it is built more on storytelling than action; it explores dark reaches of the heart, and is not in a hurry about it. It has a moral, but doesn’t beat you up with it—both writer and director seem content that it catch up with you later, maybe one day when you are about to shut the door on love. 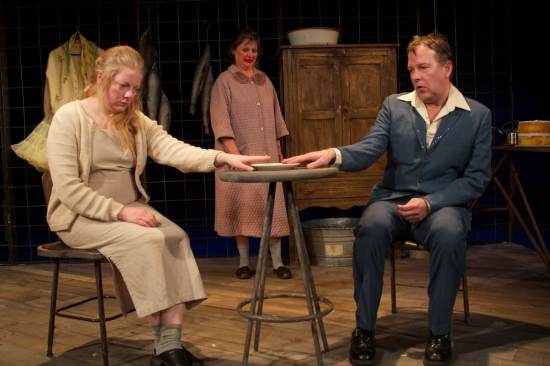 Marcia Edmundson, Lenore Field, and Katja Hill, as three sisters endlessly replaying their old memory-tapes and trying to keep safe from love, are more than capable of working in Walsh’s terrain of amazing language that mixes naturalism and symbology. Derrick Ivey, as the fishmonger Patsy, makes his poetic lines tumble naturally from the shy man’s mouth, and easily carries the responsibility of offering warmth and life to the sisters’ cold house. Storer, in his usual deft manner, balances the bleak with the tender, and coaxes his actors into to opening the characters’ sad, barren hearts to reveal their self-made comic tragedies and blighted longings. In 85 minutes, they lay out the proofs that risk + courage may or may not = love, but love – (risk + courage) is a null set.

You may think at first that you will not connect with these characters—Ada, Breda, Clara, and Patsy—because they don’t connect well with each other, but you do. As Breda and Clara begin to repeat their interlocking stories of their fateful night years ago at The New Electric Ballroom, they seem repellent, purposefully self-destructive. Soon you perceive that they are mired, stuck in a deep scratch in life’s record, and you begin to care for them, though it is a big relief when sweet Patsy shows up with his day’s load of fish and gossip, to relieve the miasma of feminine bitterness. 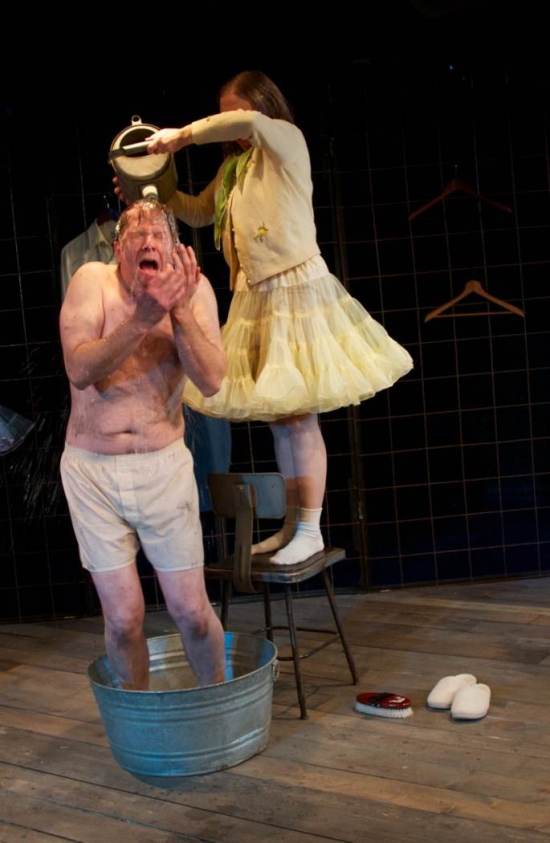 Although the play is ultimately very sad, it is studded with comic moments. Katja Hill as Ada doesn’t get any of the flashier ones—hers is a very quiet and nuanced performance, depending a great deal on body language. But Edmundson as Breda and Field as Clara get to exercise their considerable talents for drollery throughout. Derrick Ivey is, as usual, entirely believable no matter what he is doing. He also had the audience hooting with laughter at several points, not least during the bathing scene. The multi-talented Mr. Ivey also designed the sets and costumes, which, also as usual, make the most out of very little. (How does he do it? He is also directing the forthcoming Durham Savoyards production of Pirates of Penzance, opening March 14 at the Carolina Theatre.)

The New Electric Ballroom runs through March 9. It’s a fine script, and a wonderful opportunity to see several of the Triangle’s best at play. Tickets through www.manbitesdogtheater.org. You may also want to pick up tickets for the next show there, Little Green Pig’s Derklöwnschpankeneffekt: Two Plays for Klöwn, directed by the Hon. Michael O’Foghludha (who was dramaturg and dialect coach for Ballroom) and starring our favorite bad boys, Jay O’Berski, Jeffrey Detwiler and Carl Martin, who also have that long-time synergy thing going on. It opens March 21.