The first time I can remember experiencing synesthesia was the first time I listened to a recording of the Debussy Preludes, Book II (1913). The music jumped out at me in colored shapes and lines. I couldn’t get over it. I wore that record out. Years later, I saw artwork that sounded just like the Preludes–the simultaneous color paintings of Sonia Delaunay, contemporaneous with Book II. I saw those shifting, overlapping colors in my ears, clearer than ever before, during the wonderful piano recital by Pierre-Laurent Aimard, presented on November 11 by Carolina Performing Arts.

CPA included this recital in its series on Stravinsky’s The Rite of Spring because of the connection between the two composers. Just imagine: Stravinsky (1882-1971) writes the four-hand piano version of The Rite and takes it to his older pal Claude Debussy (1862-1918), who has been much enamored of Stravinsky’s Petrushka. They sight-read the score together at the first performance. It boggles the mind. As Aimard said in his fascinating post-concert talk, there is quite a contrast between Debussy’s “intimate world and the ernormous, violent world of The Rite of Spring.”

But back to the Preludes. There are a dozen in Book II, and hearing Aimard speak about them was almost as good as hearing him play them. “Debussy loved day-to-day pleasures in life,” he said. “In each of the preludes, there is a different world of color–and a shimmering between two color or harmonic worlds.”  The way Aimard described these harmonies and colors, he could have been talking about Delaunay’s (and other Orphists and simultaneous color painters) techniques. 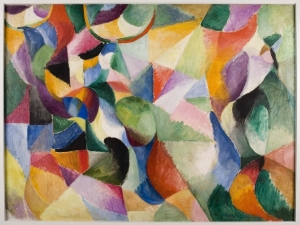 “Harmony has not the function of a step, of going somewhere,” he said. “It stays, its own color.” But Debussy “surrounds one note with changing harmonies,” and that is very like Delaunay. Or, he makes two notes move against three, to make an undulating travel inside the harmony. In a trill, the light changes. And then there is the manipulation of space. Aimard explained how Debussy used scales at different speeds to give us the sense of changing distance in space from the sounds/colors of the final Book II prelude, Feux d’artifice (Fireworks). Something very similar goes on in Delaunay’s work from this period. Debussy also like games, tucking bits of other music into his compositions, like figures hidden in plain sight in a landscape. Quotes from Petrushka are scattered throughout the Preludes, and a snippet from The Rite is hidden in number 11, hidden by making the notes piu pianissimo rather than sung out by four blazing trumpets. Here’s Delaunay sneaking some figures into her abstraction.

Aimard also played the very short Three Night Pieces for Piano by Heinz Holliger (b. 1939) that were just about the saddest music I’ve ever heard. I don’t think I could have borne for them to go on. But they were like a bitter drink before a rich dinner: after them came the whole set of Robert Schumann’s Symphonic Etudes. I had never been able to get worked up about Schumann, but I suppose that’s because I had never heard him played with such rich feeling. 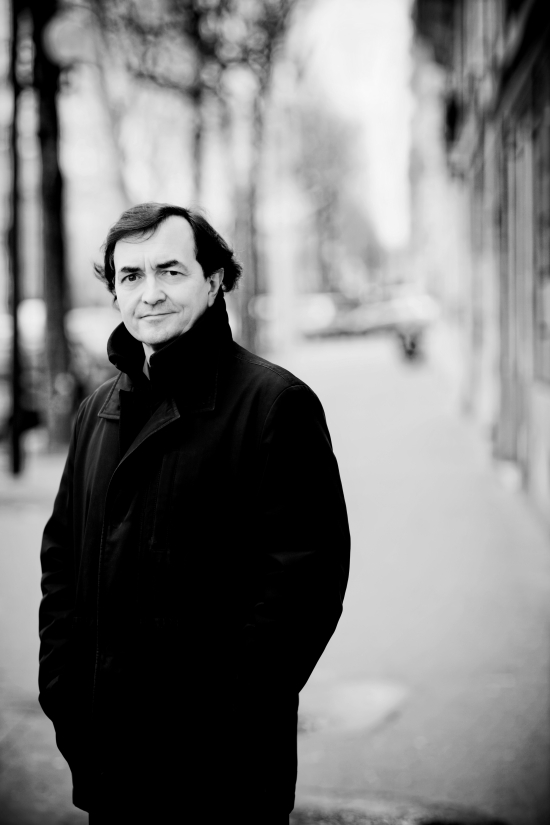