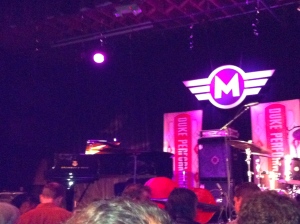 Duke Performances just keeps on bringing it. Amazing music all the time–and now, everywhere you turn. After a “normal” season opener in Nelson Music Room, and a hot gospel concert at Hayti, DP launched its mission to put jazz in appropriately-sized clubs in downtown Durham. This autumn of our content began September 21, with a smoking set by The Bad Plus in the Showroom at Motorco Music Hall, at the corner of funky and cool–Riggsbee and Geer–where street players roam and food trucks congregate. And, those Bad boys will be back tonight.

Don’t get me wrong, I love Reynolds Theater at Duke, where The Bad Plus nearly set the roof on fire with their re-working of Stravinsky’s The Rite of Spring in 2011. Reynolds is my second home. But there’s no doubt that a club stage, and a small audience (maybe 300) were better for this set of madly wonderful tunes, mostly from the band’s new album, Made Possible (official release next week; available at the show). Being so close to the musicians is thrilling–you get to see their facial expressions, and catch the tiny wordless communications among them that make this one of the tightest trios imaginable. The occasional ring of a beer bottle rolling on the concrete floor, the murmurs of drink orders in the back, the small ruffles of movement as drinkers came and went, just added to the textures of the music.

Hard to say, ever, what comes first, when music suddenly begins. Sometimes a melody from Ethan Iverson on the piano. There is always melody in these songs, and sometimes it is breath-catchingly beautiful. It may come and go, separate and modulate, interrupt itself for rhythmic bursts, but the sense of continuous melody underlying all imbues the listener with a kind of peacefulness, and a willingness to go with the whole of the giant adventuring sound wherever it will.

All three men write the music they play, and watching them, one quickly gets a sense of whose song is whose–the attitudes are different, even though the playing is united. The set opened with bassist Reid Anderson’s big sound “pound for pound,” moved into drummer Dave King’s “wolf out,” with its symphony of escalating rhythms, and on to Iverson’s exquisite “sing for a silver dollar,” a bundle of spangled shimmers over velvet bass, with an appearance by E.T. on the drum kit.

And so it went, from one honest, heartfelt, smart piece of music to the next. These guys have known each other a long time–they first met and played together in junior high school, outside Minneapolis, and formed this band twelve years ago. Together they seem to have incredible freedom to innovate, creating very sophisticated music with a stunning combination of force and delicacy. Maybe delicacy is not quite the word–there is nothing wispy, and even the tiniest sounds have firmness. At any rate, they get more delicious texture and color and range of sound out of three instruments than seems possible (those multiple microphones do help), and they do it with disarming humor and nice-guyness and sharp synchronicity. And, they can stop on a dime. 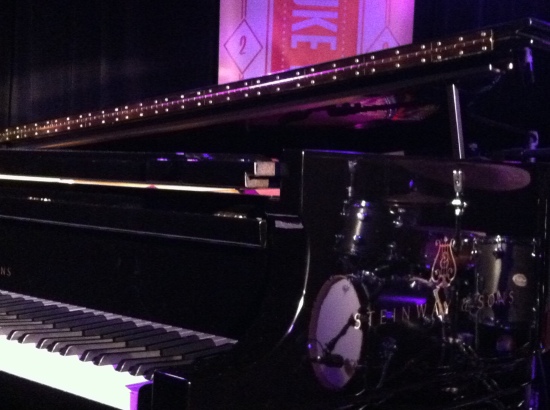 The Bad Plus’ drum kit reflected in one of Duke’s Steinways, onstage at Motorco, 9/21/12.