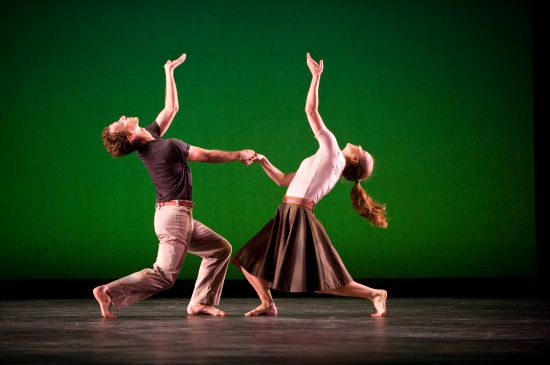 The American Dance Festival closes its 2012 performance season this weekend at the Durham Performing Arts Center, with two nights of the Mark Morris Dance Group, accompanied by the fine trio of the MMDG Music Ensemble. Compared to some of the ferocious, rowdy and ridiculous programs preceding it, this one is a rather mild-mannered–but it is such a treat to have live music for the dancing that one simply revels in the pleasurable experience.

The evening opens with the highly amusing 1982 dance, Canonic 3/4 Studies, set to “Piano Waltzes” by Harriet Cavalli, and various (uncredited) bits by other composers, arranged for solo piano (Colin Fowler). Is it possible to be gloomy in 3/4 time? I don’t think so. The good humor begins with a single male dancer cavorting alone; he soon is joined by eight more. They frolic through many permutations of step and turn to the lovely beat, before leaving him alone again. Morris excels at putting the heart into mathematical, musical studies of permutations and combinations, and this dance is no exception.

We see that same interest in the other works, especially the 2011 Festival Dance that closes the evening. The waltz, march and polka of Johan Nepomuk Hummel’s Piano Trio No. 5 in E major (Op. 83) are played delightfully by Colin Fowler, piano, Anna Elashvili, violin, and Julia McLaine, cello. As the 12 dancers make their sweet patterns in space, the women’s circular skirts froth to reveal a glow of red inside, indicating the heat inside the formality. Bits of various courtly and romantic dance styles going back hundreds of years mix and match with balletic lifts and turns, all unified by Morris’ sweeping arm curves, delicate footwork, interlacing lines and sly humor. The dance both begins and ends with brief tableaux of two dancers wrapped together in big hugs, further emphasizing unity and joy.

Preceding Festival Dance is the second piano-only work, Silhouettes, which shows off Morris’ penchant for mirroring and reversals in the choreography. The very interesting music is Richard Cumming’s “Silhouettes, Five Pieces for Piano.” Here Samuel Black and Domingo Estrada, Jr., apparently sharing one pair of pajamas between them, frisk through the many ways to make one out of two, or a whole out of two halves. It’s not challenging, but very pleasing, and one could look at Estrada’s bare and gleaming chest pretty much forever. 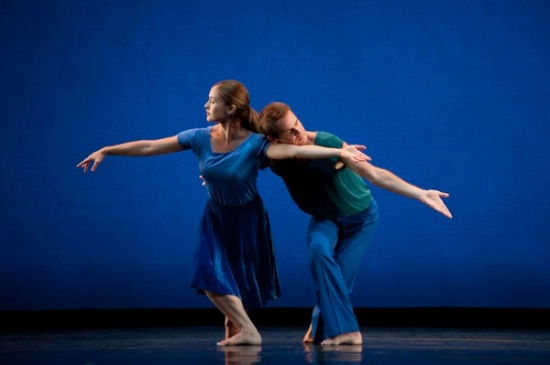 The meat of the evening to this viewer (my neighbor across the aisle fell asleep!) was Rock of Ages, a 2004 dance for two men and two women set to the Piano Trio in E flat, Adagio, D 897 (“Notturno”), by Franz Schubert. The backdrop, glowing in lighting by Nicole Pearce, and the rich, subtle costuming in violet blues and bluey greens (Katherine M. Patterson), immerse you in the magic of the twilight hour, just before Venus rises. Its exquisite melancholy offers a fitting farewell to this season of the great American Dance Festival…farewell, until we meet again.

First published 7/28/2012 in The Artery on http://www.indyweek.com.  See it there, with photo set by Sam Trull of Rock of Ages.

“I’ve seen some things I hated at the American Dance Festival over the years. Most of them weren’t bad art: They ran counter to my tastes and philosophies. This week’s ADF program in Reynolds Theater, however, is weak—so weak, it is difficult to sit through. “Footprints,” with its premieres of ADF-commissioned works by three choreographers, is the new incarnation of what for some years had been called “Past/Forward,” in which one or two new works were presented along with reconstructions of one or two modern classics. “Past/Forward” succeeded the International Choreographers Commissioning Program, in which one often saw the strangest and most exciting new things. It was always a high point of the festival for me. What all three formats have in common is that the works are danced by ADF students, who spend part of their six weeks in the ADF School working with the choreographers to present the new pieces near the festival’s end. Students get great experience, and choreographers get the chance to work with large casts without large costs.”

Dancers performing a Helen Simoneau work. Moves similar to this were the highlight of her new piece in Footprints. Photo: Steve Davis, courtesy ADF.

Paul Taylor always puts together programs that juxtapose his dances in ways that allow his ideas to rub up against each other. They are as carefully composed as a gallery of paintings, curated along certain thought-lines. Now in his 80s—this is his company’s 58th year—Taylor is still an active dancemaker. He can place his newest work in relief against explorations of related themes, chosen from across the decades. For the Paul Taylor Dance Company’s appearance at the 2012 American Dance Festival in the Durham Performing Arts Center July 20-21, the program might have been called “Theme and Variations on Sexual Attraction.”

It opens with Aureole, from 1962. The three women and two men, all in white, frolic to Handel (from Jephtha, and the Concerti Grossi in C and F) against a blue backdrop in glowing gentle light, miming the games and rituals of dawning sexuality.  They are light, skipping and jumping, yet the steps always have the characteristic Taylor drag or friction that testifies to earthy groundedness. It’s open, flirtatious, teasing—full of potential and noble intentions. If you need an image for “noble,” simply look at Michael Trusnovec when he kneels, one leg stretched back, and opens his arms. On the 20th, he was magnificent in every posture of strength and every moment of graceful motion. Aureole is so beautiful, so complete in what it is, and so perfectly bound to the music, that I get quite blissed out by it. Sort of like falling in love.

From there, Taylor launches us over to the dark side of lewd lust in the grotesque Big Bertha, one of what I think of as his Americana dances. There is nothing noble here. It’s lust, power, despoliation, violence, degradation. Only regular stuff, not the stuff of dreams. Needless to say, it’s very disturbing, and placing it right after the immaculate Aureole only magnifies its brutality. 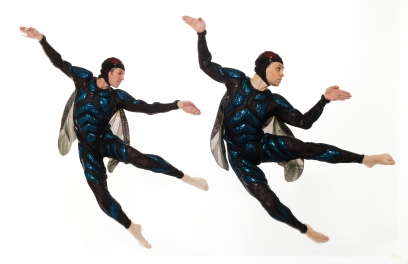 Even though it followed an intermission, the new work Gossamer Gallants seemed a little tainted by Big Bertha. When it began, though, I thought for minute the ghost of Pilobolus Past had risen—all those acid green Lycra glowworms and dark-marked fireflies rushing around in pulsing groups. It’s Taylor for sure, though: We see the insects in sexual display, sexual pursuit and sexual predation. The basic message seems to be, their DNA makes them do it. It’s all very lively, with lots of nice dancing (some ritual bits reminiscent of Aureole), but with a deathy edge. In the end the females kill the males. One, who did not mate with a female, scuttles away at the end. Hmmm. However, just like real fireflies, Gossamer Gallants  is awfully fun to watch.

Finally, we come to knowledgeable, controlled lust, ritualized and drawn out for mutual pleasure, in the 1997 Piazzolla Caldera, set to tango music by Astor Piazzolla and Jerzy Peterburshsky. It was gorgeously danced on the 20th, really charged and steamy, so that it became more than a dance about tango dancing. Michael Trusnovec was electric, almost incendiary. Every year, I think: this is it, this is Trusnovec at the peak of his prime, but each year he is better, embodying Taylor’s complex ideas with ever greater precision, clarity and passion.